mauritiusMID
Four years already since the launch of the concept "Maurice Ile Durable" by the Prime Minister. This vision has strongly influenced the energy sector, construction and consumption in general. Maurice Ile Durable she won the bet?

Preparing the final document on the 'MID Policy and Strategy is currently Mott Mac Donald, MID consultant who works with Lux Consult (Mauritius) Ltd. Foreign consultants in Mauritius yesterday. Scheduled for late July, the report has been a slight delay, but is on track. Meanwhile, the Mauritian delegation presented the project to the MID UN Conference on Sustainable Development, Rio +20, held in June. Also, projects under the MID Fund continue.

The highlight of the MID process has been popular participation. The opportunity was given to everyone to make their voice heard and contribute to the development of strategies.

The process began in February 2010. Subsequently, in April 2011, a Green Paper has been developed after many meetings between various groups speaking on the subject. In June 2011, a 'National Vision MID has been submitted to the Cabinet. Between June and July 2011, there have been several workshops and training sessions across the country, around several themes related to sustainable development. The reports of these working sessions were published in August 2011.

The government's goal is to translate the vision into a concrete policy MID, a 10-year strategy and an action plan based on five main themes: energy, environment, employment, education and equality. The final report will address four key areas: the development of a long-term strategy for the next ten years, the development of an action plan listing specific projects with cost estimates, review of legislative frameworks and development indicators to measure the implementation of the recommendations.

The 'Maurice Ile Durable Fund has been established in June 2008. The goal is to fund various projects, plans and programs related to the MID vision. Through funded projects, the MID Fund wants to promote renewable energy, responsible consumption, research, innovation and recycling. The MID Fund has financed several projects in the past four years. Some of these projects are ongoing, while others, some twenty, have already been completed: 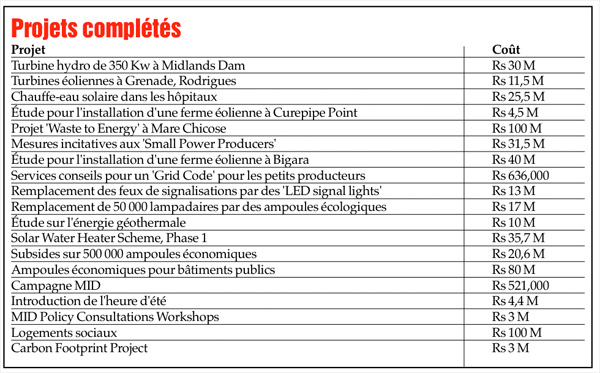 Mahomed Osman: The final report being

The Executive Chairman of MID Steering Committee, Mahomed Osman told The Economy Challenge the final report on the policy and strategy MID is underway. It was a long process, where everyone had a say: civil society, academics, NGOs, public and private sectors, among others. A total of 24 workshops with over 300 participants took place, and the reports of the working groups were circulated in public. Several public meetings were also held with local authorities.

Several laws and regulations have been introduced to combat pollution and promote sustainable development. In 2010, a tax is imposed on plastic bags in Mauritius. In 2011, the government introduced a carbon tax on vehicles, which is calculated on emissions. The least polluting vehicles receive a rebate of excise duties, while the amount is higher for those with high emission.

The Environmental Protection Act, which has existed for years, requires all development projects having an impact on the environment, to prepare a report on the impact and to obtain a license EIA (Environmental Impact Assessment). The Energy Efficiency Act, passed last year, aims to regulate the production and import of appliances in Mauritius, taking into account the level of consumption of electrical energy. This law makes it mandatory labeling of energy efficiency standards on electrical appliances such as refrigerators, washing machines, dishwashers, electric ovens, air conditioners, among others. The regulator, the Energy Efficiency Management Office, is already operational. The Building Control Bill is being prepared to replace the Construction Act which dates from 1919. The new standards will govern the construction of buildings.

For Yusuf Jhugroo, Institute for Consumer Protection, with the Maurice Ile Durable concept, we must also change attitudes and practices evolve. MID does not mean only renewable energy or recycling. The concept is much broader. "A simple example: every morning, in every city, hundreds of cars go to the local bakery to buy bread, causing congestion and polluting the atmosphere.

However, one dealer could deliver these bread rolls at home. So, just some bread mobile merchants to reduce traffic and pollution, "says Jhugroo. "There are also cases where several buses are the same distance with a few passengers each. A good organization would have allowed a few buses to transport all passengers, diesel and saving space on our roads. "For the ICP, LRT is also compatible with the MID project.

Zaheer Allam, Environmentalist "Green infrastructure should be our priority"

> Do you think Maurice Ile Durable project has achieved its objectives?

I think the MID initiative is still very young. At first, his philosophy was very interesting, affecting the entire population. But in analyzing the facts, we see that so far, the actions are more focused on 'green washing'. Through the various speeches, MID officials emphasize a change of mentality, but some of their actions contradict the essence of green ideology. If we really want to build a sustainable island, we must first define a concrete plan and have a dedicated team. I think it would be easy to adopt sustainable practices. To do this, the government should provide alternative and incentives for the population. At this time, incentives are limited.

> In your opinion, what are the other projects or environmental aspects that the MID should address?

Green building and green infrastructure should be our priority. It should also have a policy of incentives regarding the environment and energy. A sustained campaign to raise awareness of ecology is everyone's business, not just the government. Sustainable development must make its entry into the school curriculum. Adults should also be taught. Consumers should be able to choose products that have a low VOC (Volatile Organic Compounds).

> What do you think about the country's energy policy?

I think we want to rush to find ways how to increase our energy production, without really analyzing alternative. It should also work towards a reduction of energy consumption. In an intelligent society, we can find ways to meet energy demand while respecting the environment. A simple example: urbanization. Green buildings can reduce energy consumption up to 80%. We can well imagine our public buildings or revise our existing buildings in this direction. Green building has become important.

> The alternative system of transport, light rail, still divides. On the ecological point of view, this project is really commendable, despite its enormous cost?

We must not waste anymore time on this project. We waited too long. Meanwhile, the company has evolved, the population has increased. Congestion we lose billions in terms of fuel consumption and time. It also contributes to the pollution of the atmosphere. A system of alternative transportation such as light rail includes economic, social and environmental.

> You are one of the opponents of the project a coal plant. According to the International Energy Outlook 2011, world production of energy from coal, which was 29% in 2010 will be 27% in 2020. Your opinion?

The use of coal is in sharp decline, given its adverse effects on health especially. However, produce coal-based energy is a miscalculation, because coal is non-renewable, price increase over the years. There are several studies that have shown that the use of coal will experience a peak in 2025, then it will decline because of unrest environmental groups advocating for alternative energy, especially with climate change and the impact of emissions of coal on the health of people. Locally, the MID predicted in its latest report on energy, the oil and coal will be replaced by 2040. The question arises: if the MID predicted the end of coal, so why allow such a project with us?