Bangladeshchinaforeign workersmauritius
Labour Minister Shakeel Mohamed decided Wednesday to suspend until October 15 granting new work permits to foreigners in the construction sector. A measure taken at a time when the foreign labor has become a necessity.

Following the strike of Bangladeshis Real Garments factory , a committee comprising officials from the Ministry of Labour, the Finance and the Public Infrastructure , has been formed to identify some gaps in the construction sector . The goal is to give priority to employment of Mauritians .
Shakeel Mohamed announced any training paid by the Mauritian government to increase their chances of employability in the sector. And they will replace foreign workers.
Freezing recruitment of foreigners is welcomed by Uckoor Gerard , president of the Association of Small builders : " It's like when we go to China on a site. We never agreed with this system. Construction companies , both Mauritian and foreign, are against the law. "
However, the union negotiator and Reaz Chuttoo sees this as a "decoy" , explaining that the construction sector is already wrong and fires , making the foreign labor less necessary : "Measuring Shakeel Mohamed n is a bluff . In a few months , I saw some 3,000 layoffs. Foreigners are no longer a necessity in construction. Why not suspended license in the textile industry ? " A Strategic Paper for the construction sector already provides for a reduction of foreign workers in this sector.
It is a fact that foreign workers in Mauritius , which are more than 34 000 (although this figure has decreased slightly between 2007 and 2012 , from 35 533 to 34 509) , representing a workforce almost inevitable in several areas.
" Mauritians do not want to work as machinists. So foreigners are inevitable , especially in the textile , "says the union Feizal Ally Beegun , which campaigns for the rights of foreign workers . Side business, we are of the same opinion . Ahmed Parkar , chairman of the Joint Economic Council (JEC ) , estimates that foreigners have become essential links in the proper functioning of the Mauritian economy : " If we want a " two -digit GDP " , this can be done without workers foreigners. "
An idea that is similar to that of the economist Pramode Jaddoo : "Our economy will suffer ! " According to him, foreign labor is of great importance in several key sectors , namely textiles , construction or hospitality : " We need foreigners who contribute significantly to our production system . "
One of the major benefits , says the economist, lies in the fact of wages paid and versatility. "As Mauritians are specialized , foreigners can multitask ," says Pramode Jaddoo .
Construction - A Strategy Paper providing
The decision to suspend the granting of work permits to foreigners in the construction sector is in line with the logic of government law. The Ministry of Public Infrastructure, in collaboration with stakeholders , finalizing a five-year Strategy Paper for the construction sector . A document that wants to better regulate the sector through various measures . From: a reduction in the number of foreign employees .
A measure to allow more Mauritians to take advantage of opportunities in the sector. It must still pass through better training of the workforce Mauritius . The Strategic Paper also focuses on improved registration procedures builders , but also on the development of a strategy for human resource development . This is to study the strengths, weaknesses and opportunities in the construction sector.

Immersion in a dorm
Clothes strewn on the floor, food piled in a corner of the building, toilets and bathrooms in disrepair. This is the view of the dormitory which opens to us in a company Red Earth. It has installed a few thousand foreign workers in different dormitories in the region. Report in one of them, located in Le-Rattle.
We are first marked by the hostility of the dormitory . " No Trespassing . Tresspassers Will Be Prosecuted " sign displays . Few meters in front are the bathroom and the toilet. It's not fancy . Three shower cubicles and toilets for the 60 Sri Lankans and Bangladeshis who were boxes.
"We are forced to shower us with all the little bathing huts which were built there ," says Nabil , Bangladeshis employed for four years.
To have the heart net on cleanliness and the spaces in which these foreigners were confined , it must take the stairs. Already there, we are marked by the smell of urine, which combines with the scent of food. The toilets are not far from the kitchen.
Fourteen areas have been converted into bedrooms of 15 square meters. Inside were built four bunk beds. An average of 10 people to occupy this space . "It is not luxury, but must work ," exclaims Nabil .
inhuman treatment
For the union Faizal Ally Beegun all this testifies to the inhuman treatment in which foreign workers are condemned to live for a salary of less than Rs 10,000 . Clothes litter every nook and cranny of the rooms, lack of cabinets. The rooms do not feel the fresh air, lack of ventilation.
Lacking proper pantry , provisions were packed under a staircase . The food is not protected from rats and insects . Kitchen utensils are no longer inspire the utmost cleanliness . "We do not have time to take care of the hygiene of the place. With 10-13 hours of daily work , cleaning is the least of our worries , "say some employees.
Asked for a reaction , a member of the management of the company argues that it is wrong to say that the dorms do not meet the standards , " Otherwise, the officers of the Ministry of Labour have already pinned us. We offered a suitable place for these workers . It is their job to keep it clean . "
all equal
To Mauritian workers as foreigners, rights and responsibilities are the same. According to Shakeel Mohamed , the only right that foreigners do not have is to fall into illegality , to use violence and especially to take the law into their hands.
"Do you believe that Mauritians who work in other countries can act as some foreigners in Mauritius ? Of course not ! Because they will be deported on the spot. So there must have compliance , "says the Minister of Labour.He added that all measures are taken to ensure the well -being of foreign workers. He cites the Special Migrant Workers Unit, the Lodging and Accommodation Regulations and states that the Ministry has put the order in the process of recruiting foreigners.
Shakeel Mohamed does not fail to state the admiration and appreciation of international organizations concerning the treatment accorded by Mauritius to foreign workers. In this sense, it refers to the International Labour Office (ILO), the International Organization for Migration and a parliamentary delegation from Bangladesh who were in Mauritius two weeks ago .
" The delegation has visited many countries and it has only praise for the conditions offered by Mauritius. Bangladeshi parliamentarians have thanked us for the way we treat their compatriots , "says Shakeel Mohamed .
Bangladeshis are very popular
Statistics on the number of work permits issued to foreigners between 2007 and 2012 show a slight decline, but also a significant increase in the Bangladeshi who obtained employment in Mauritius. According to figures from the Ministry of Labour , the number of Bangladeshis rose from 6,670 in 2007 to 14,825 in 2012.Regarding the Malagasy , the number has more than doubled between 2007 and 2012. However, there has been a drastic decline in the number of Chinese workers in Mauritius. If in 2007 it was 10,514 , in 2012 it was 4607 . Ditto for Sri Lankans . A reduction of almost 50%. Slight decrease as the Indians , whose numbers have dropped 11 484-8 772 in six years. 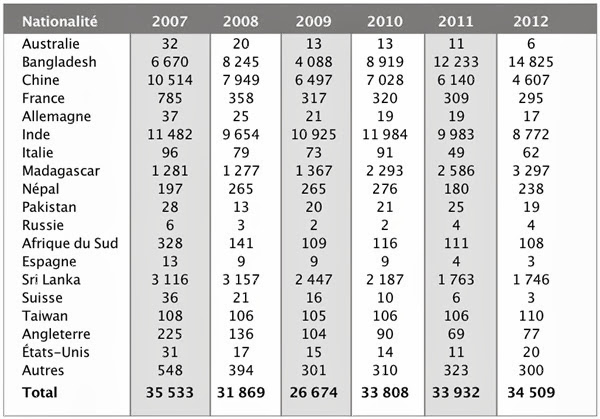 The unit ensures grain
To ensure the well-being of foreign workers in Mauritius, the government set up a Special Migrant Workers Unit operating under the aegis of the Ministry of Labour, Employment and Industrial Relations. If it is the employers who conduct recruitments through agents, it is the Special Migrant Workers Unit that checks whether all the conditions of the contract comply with the law. This unit focuses primarily on housing, employment and wages of foreign workers, and through regular visits by inspectors.
The Special Migrant Workers Unit, according to its director Narainduth Gujadhur assistant, is also involved in case of trouble between foreign workers and employers. In cases where no agreement is found between the two parties, then there is recourse to the Industrial Court.
Contribution of Rs 20 billion
The approximately 40,000 foreigners working in Mauritius contribute to 25% of turnover to export. Statistics show that Mauritius has made Rs 80 billion in terms of exports in 2012 so that foreigners have contributed Rs20 billion. Reported by Ahmed Parkar, President of the Board of JEC, who believes that there is some 4000 foreigners in Mauritius doing "white-collar jobs" numbers. Foreign labor, economists and remains a "fundamental" to the Mauritian economy, despite the fact that a foreign worker costs 40% more expensive.