(CNN) -- For a reputedly impoverished continent, Africa has a remarkable number of golf courses -- 828 courses in 50 countries with a little more than half of those, 450, located in South Africa.

Egypt, Kenya, Mauritius, Morocco, South Africa, Tunisia and Zimbabwe are all gaining reputations as good destinations for a golf holiday.

There are 43 other countries in Africa with multiple courses (Nigeria has 50 and Zambia has 21) and it won't be much longer before some of them join that list.

If you're contemplating a golf holiday in Africa, here's my list of the 10 best golf courses in Africa, in alphabetical order by country.

All are great courses and, with the exception of the Seychelles, there are plenty of other excellent courses in each country if you like variety.

This 6,991-yard, par-72 Gary Player design is a spectacular desert links course with lush green fairways, extensive water hazards, including the Red Sea on five holes, and a series of potentially problematic man-made lakes on four other holes.

Other hazards on this beautiful and challenging golf course include palm trees dotted around the fairways, strategically placed fairway bunkers on most holes, plenty of green-side bunkers, and, of course, the vast desert of sand that awaits you on every hole should you stray too far off line.

Other golf facilities available at the Cascades include a nine-hole par three course (also designed by Player), a wide range of the latest golf clubs to rent and a Golf Academy with a 60-bay driving range, several putting and pitching practice greens and a team of PGA professionals always on hand to sort your swing out.

Green fees at the Cascades course start from $96 a round.

At present there are seven beautiful championship golf courses on Mauritius with another one scheduled to be built in the next two years.

The best of them is the Peter Matkovich-designed Heritage Golf Club course, which measures more than 7,000 yards, par 72 from the back tees.

Here, majestic views of the Indian Ocean shimmering in the sunshine are available from holes 1-5, 7-9 and 17-18, which rise up into the foothills of Bel Ombre in the south of the island.

Strategically placed boulders and course signage on rocks also enhance the look of an already spectacular and challenging course, while a luxurious clubhouse awaits golfers after their rounds.

By using a lot of the space available and keeping many of the holes separate from each other, Matkovich has created a tremendous sense of freedom for the golfer, though wayward shots can easily be swallowed up by the lush vetiver grass that surrounds many fairways, or the mango, papaya and palm tree jungle that lines some holes.

The Heritage golf course also has some practice facilities including an excellent nine-hole, par-three course, a double-ended driving range and a superb short game area.

Green fees at the Heritage Golf Club are free if you stay at either one of the above all-inclusive hotels, or $205 a round if you're staying elsewhere.

Another beautiful course on Mauritius is Le Touessrok, situated on its own island at Ile Aux Cerfs on Mauritius' east coast, and the only golf course I've played that's not reachable by road, only by boat or helicopter.

This Bernhard Langer-designed course measures 7,115 yards, par 72 (from the back tees) and is a layout that has to played to be believed.

With several holes that run beside the white beaches and turquoise blue waters of the Indian Ocean, the whole course is a work of art, with a wide variety of exotic flora and fauna, including scarlet cardinals that flit around the golf course.

It's also an extremely tough course, with black volcanic rock outcroppings coming into play on several holes, mangrove swamps on many others, water hazards to test your accuracy on 13 holes and strategic bunkers on many more.

Green fees are included in room rates for resort guests, but they must pay $32 per person for a cart (not compulsory). Outside visitor green fee in high season is Rs8700 ($281) including boat transfer and cart.

The course at the Mazagan Beach & Golf Resort was designed by South African legend Gary Player and, though opened in 2009, has already been voted number one in Morocco by "Golf Digest" magazine.

Created as a links course by Player that stretches alongside the beach and dunes on the shores of the Atlantic Ocean, the par-72 course can be stretched to 7,484 yards from the back tees.

Fortunately for ordinary golfers several different sets of tees allow the course to be played at distances ranging from 6,142-6,647 yards.

Much of the challenge here is created by the course's complete exposure to winds blowing in off the Atlantic which can be strong.

There are many deep green-side bunkers, sand dunes and typically nasty links-style rough.

It's a wonderful golf course, one that always tests you yet will give enough space to enjoy its beauty.

Namibia may not be top of mind for golf in Africa, but this southern African nation has 15 courses and "Golf Digest" recently voted the 18 holes at Windhoek Golf & Country Club the best of them.

Laid out on 72 hectares of natural Namibian bushveld and vegetation on the outskirts of the capital city, Windhoek measures 6,675 yards, par 71 with lush fairways that wind their way through the trees.

In addition to the trees and rough, wetlands come into play on three holes and plenty of deep bunkers surround most greens.

Well worth a visit for golfers who find themselves in Namibia, with a luxury four-star resort hotel attached to the club.

Green fees at Windhoek are NAD 330 ($33) for visitors who stay at the resort hotel, NAD 410 for ordinary visitors.

The 5,827-yard, par-70 course at the Lemuria Resort on Praslin Island in the Seychelles is the only 18-hole course in this Indian Ocean archipelago. But what a golf course!

What it lacks in length this beautiful layout more than makes up for in the challenge it presents.

Designed by Rodney Wright and Marc Farry, and opened in 2000, the first 12 holes play through narrow palm-lined fairways beside the resort itself with plenty of water and sand waiting for wayward shots.

The remaining six holes rise up into the island's hills providing panoramic views across the course, the island and other islands in the distance, while the fairways get narrower and the challenge harder.

Apparently the record for number of lost balls in one round stands at 40, so take plenty of ammo with you.

But if you ever get the chance to play here grab it because this is truly one of the most beautiful golf courses I've ever played anywhere in the world.

Green fees here are included in room rates for golfers staying at the resort although compulsory carts have to be paid for (SCR 760/$64).

Green fees for anyone not staying at the resort are SCR 1,610 including cart. 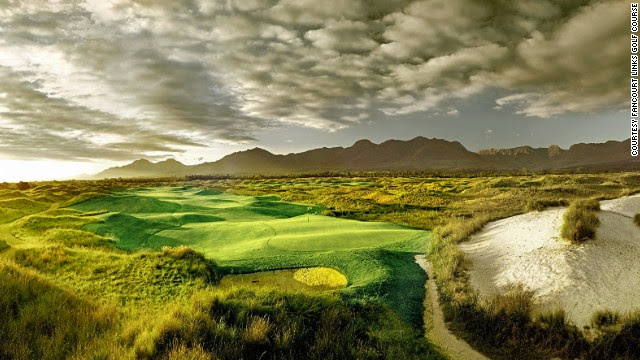 One of three great courses at what is Africa's premier golf resort, the Fancourt Links course was voted number one in South Africa by "Golf Digest" earlier this year, while Fancourt's other two courses, the Montagu and the Outeniqua, made the top 20 in the "Golf Digest" list of the best courses in South Africa.

All three were designed by Gary Player.

The latter two courses opened in the early 1990s, while the Links opened in 2000.

Measuring 6,919 yards, par 72 from the club tees, the Links course can be stretched to 7,535 yards from the very back tees to accommodate the world's best players, which it's done on several occasions.

In 2003 it hosted the Presidents Cup, which ended in an historic tie after a dramatic playoff between Tiger Woods and Ernie Els.

Other major championships to be held here include the 2005 Women's World Cup of Golf, the 2006 South African Open and 2012 Volvo Golf Champions tournament on the European Tour.

You can only play the Links course if you're staying at the Fancourt Resort, when green fees are ZAR 1,600 ($163) per round including halfway house drinks and snacks.

One of two courses designed by Player at Sun City, the Gary Player Country Club (GPCC) course is the better of the two.

It's staged the Nedbank Golf Challenge every December for the last 32 years since its inception in 1981 as The Million Dollar Challenge, a 12-golfer invitational event.

It's definitely worth playing, with Augusta-fast putting surfaces, frequent elevation changes, five water hazards and plenty of large and small bunkers to test every part of your game.

This 6,698-yard, par-72 Ronald Fream design, located just more than five kilometers inland from Monastir on the Mediterranean, plays over crests and hills and is located on a plateau with fairways that run between olive trees.

Some long holes, like the 447-yard, par-four third and the 578-yard, par-five sixth, test strength as well as ability, especially when playing into the prevailing wind which is exceptionally strong on top of the plateau.

Fortunately a variety of tees allow you to "play it forward" and many holes, including the sixth, can be reduced by up to 50 yards if you choose the right tees.

Enjoying commanding views from the clubhouse all the way to the Mediterranean, Flamingo is always in first-class condition and has excellent greens and fairways.

It's been a joy every time I've played it.

One of 30 courses in Zimbabwe, this 1993 Peter Matkovich design is regularly voted number one in the country by "Golf Digest."

The course has been carved out of dense woodland in the shadow of the Leopard Rock mountain, though many of the trees still line the fairways.

As befits a course lying in the foothills there are some serious elevation changes on many holes.

Other hazards include picturesque water features that protect several greens, rocks lining some fairways and ravines that must be carried if you're to finish a hole.

All over the course wild orchids, tree ferns and other flora species indigenous to the area thrive, while the bush teems with bird life.

Text by CNNGO
We also reccomend

26 of the Most Stunning Spots in Africa According CNN – Mauritius Isn’t There
With its expansive landscapes and formidable animal life, the world's second-biggest continent is arguably the best for photographers.

15 of Africa's Favorite Dishes According to CNN Travel
From Morocco's b'stilla to South Africa's bunny chow, don't leave Africa without sampling at least a few of these exquisite foods

ESA-EU: Exemption Obtained for the Export of 2000 Tones of Canned Tuna
Maurice has granted an exemption for the export of additional volume of 2 000 tonnes of canned tuna to the countries of the European Union (EU). This development was discussed at this week's meeting between the ACP countries in the region of Eastern and Southern Africa (ESA) signed the interim Economic Partnership Agreement with the EU, held in Mauritius this week.
Tags:
africaEgyptgolfmauritiusNamibiaSeychellessouth africaTunisiazimbabwe