Several organizations are evacuating workers from the three countries where a five-month old Ebola outbreak has worsened.

The Peace Corps said Wednesday that it was temporarily removing 340 volunteers working in Liberia, Sierra Leone and Guinea because of the virus's spread. Two corps volunteers were placed in isolation and under observation—though they aren't symptomatic—after coming in contact with an individual who later died of Ebola, a spokeswoman said.

Two U.S. faith-based organizations that are helping to treat Ebola patients in Liberia and have had American staff infected said they were evacuating nonessential personnel due to the spread of the virus, as well as security issues. Another U.S. citizen and a top doctor from Sierra Leone have died.

The developments highlight the risks for foreigners as well as for health staff treating Ebola patients. And they underscore the gravity of the evolving crisis in a poor corner of West Africa where government authorities and international health workers have struggled to bring the deadly outbreak under control.

"This is a growing crisis of proportions that will cost, we think, thousands of lives and maybe more," said Bruce Johnson, president of SIM USA, a Charlotte, N.C., missionary group, one of the groups helping Ebola patients in Liberia. "The international community has the resources and people to respond, but they need to respond."

While organizations are pulling out nonessential personnel, he said more funds and health-care workers are needed on the ground to fight the resurgence of the disease in the three African countries.

SIM will evacuate about 60 to 70 spouses, children and other nonmedical staff in the next few days, Mr. Johnson said, but staff needed to run its Ebola treatment centers will stay. One treatment center has stopped admitting new patients temporarily. "This is due primarily to the escalation of the disease—it's spreading further and faster," Mr. Johnson said.

SIM's partner, Samaritan's Purse, a Christian relief organization based in Boone, N.C., also said it, too, was curtailing operations in Liberia, citing "instability and ongoing security issues in the area."

Some health-care workers combating the outbreak have met with resistance from locals who have refused to let them treat loved ones or remove their still infectious dead bodies.

Meanwhile, international airline and health authorities are considering changes to passenger-screening rules and procedures, as well as possible steps to facilitate air-ambulance services for Ebola victims, according to the International Civil Aviation Organization, the aviation arm of the United Nations.

Airlines for America, the U.S. trade group, said Wednesday that its members remain in contact with the U.S. Centers for Disease Control and Prevention"on actions the U.S. government is taking regarding potential health concerns."

United Continental Airlines Inc. and Delta Air Lines are continuing their flights to and from West Africa.

The CDC has warned doctors to be on the alert for patients from West Africa with Ebola symptoms and says it is sending more disease detectives to the region.

The U.K. government held an ad hoc emergency committee meeting on Wednesday to discuss possible measures to help control the outbreak as well as respond to possible Ebola cases in U.K. nationals in West Africa.

The two infected doctors, Kent Brantly, a doctor from Fort Worth, Texas, doing a post-residency on a medical missionary program with Samaritan's Purse, and Nancy Writebol, who went to Liberia last year with her husband and is personnel director for a SIM team, are in stable condition but have up and down days, Mr. Johnson said.

"Both are responsive, awake, working on computers, talking on the cellphone to stay connected with people," Mr. Johnson said. "This is not a situation where they are lying in bed. They're up and around, but they're still ill."

Ebola experts say the first several days of the illness are critical, with most deaths from the disease occurring between the eighth and 10th day. Roughly two-thirds of the Ebola patients in the current outbreak in three West African countries have died. The incubation period for Ebola lasts between two and 21 days.

While the disease isn't airborne, it is easily transmissible through bodily fluids exchanged even through skin contact. Transferring the ill to higher-tech hospitals isn't easy.

The University Medical Center Hamburg-Eppendorf in Germany, which has a treatment center equipped to handle Ebola patients, said it had received an informal request to take a patient from West Africa, but the request was withdrawn.

"We don't expect any patients to be moved [here]," Christine Trowitzsch, a spokeswoman, said in an emailed statement. She didn't provide further details.

Dr. Brantly is isolated in another home. Both were moved from a hospital so they could be more comfortable, Mr. Johnson said, adding that the organizations are following safety protocols laid out by the CDC and the World Health Organization.

It isn't known how the two were infected. Dr. Brantly was treating Ebola patients. Ms. Writebol was spraying down medical personnel at the Ebola treatment center as part of a decontamination process. Mr. Johnson said SIM asked a local CDC team to recheck its safety procedures at its Ebola treatment center. 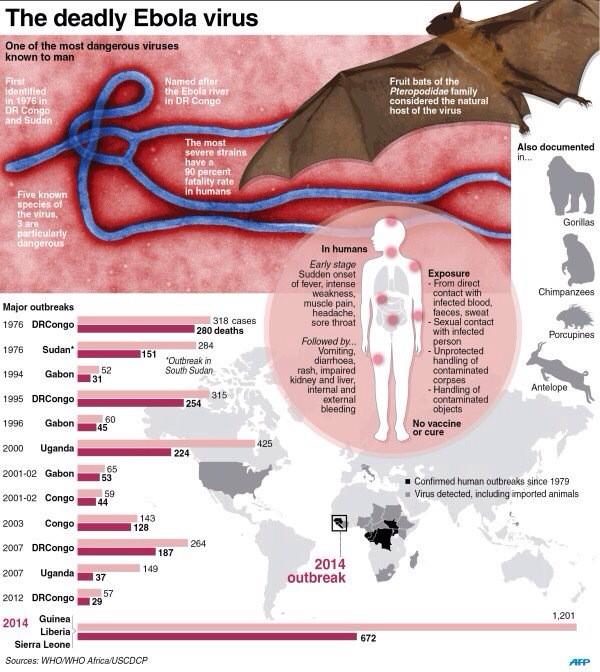 Ebola Help for Sierra Leone Is Nearby, but Delayed on the Docks

A 33-year-old American working in Liberia as a freelance cameraman for NBC News has been infected with Ebola and will be flown back to the US, the network says.

Fear of Ebola Drives Mob to Kill Officials in Guinea

The bodies of eight officials and journalists who went to a remote village in Guinea to dispel rumors about the deadly Ebola outbreak gripping the region were discovered after a rock-hurling mob attacked the delegation, claiming that it had come to spread the illness, a government spokesman said Thursday.

The epidemic reveals the nation's "persistent and profound institutional weaknesses"

Nations With Resources Have Offered Only a Trickle of Aid

Authorities said the decision was taken primarily to prevent infected people crossing into Guinea, where hundreds have died of Ebola virus disease