Hotels: Which Country’s Are Cleanest?

Tokyo’s hotel rooms may not overlook any white sandy beaches or have gorgeous frescoes dating back to the Italian Renaissance, but tourists say there’s one key factor that’s driving their popularity.

Based on the opinions of more than six million users, hotel booking portal Hotel.info said that Tokyo has the cleanest hotel rooms among selected international cities.

Japan’s capital scored 8.93 on a scale of one to 10, where 10 is best. Warsaw placed second with 8.76, followed by Seoul’s 8.73. Slovakian capital Bratislava and Bulgaria’s Sofia tied for fourth with both scoring 8.54.

“The hoteliers in Tokyo come out very well in comparison with other large cities in an international survey. Guests in Warsaw could also eat their food from the floor,” hotels.info said in its press release.

Rio de Janeiro ranked at the bottom of the list with a score of 7.29, followed by London (7.52), Oslo (7.53) and Amsterdam (7.58). Despite its rich tourism offerings, Paris also scored a lowly 7.63, placing it sixth on the ranking of cities with unclean hotel rooms. 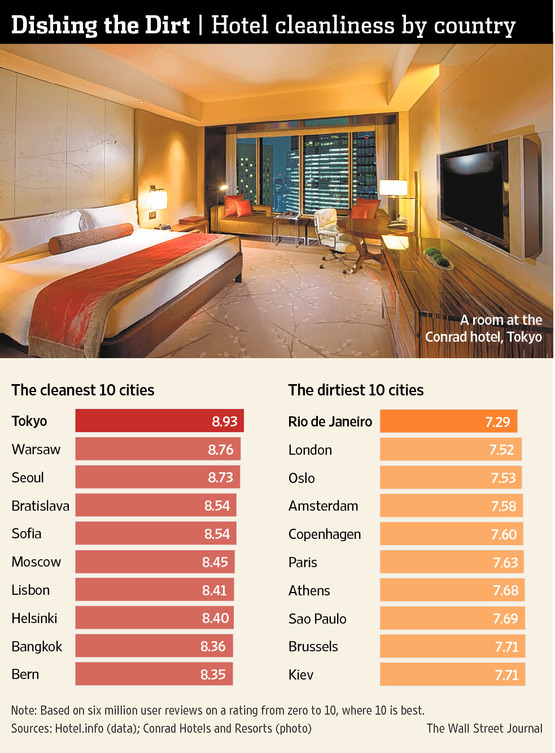 Mobile Adoption, Same-Day Bookings Up in Asia
Mobile bookings in Asia might lag behind much of the developed world, but their rate of adoption is increasing exponentially, according to speakers during last month’s No Vacancy Southeast Asia conference in Bangkok.

Excess Supply Hurting Hong Kong Hotels
An excess in supply has cooled performance in Hong Kong—a market at risk for overcapacity in the coming years, according to one report.

Think Systematically About Customer Benefits
Working within a systematic framework can enable hoteliers to identify more and better benefits for customers.