Seven Reasons Why This Ebola Epidemic Spun Out of Control

If you'd asked public-health experts a year ago whether an Ebola outbreak could turn into an epidemic spread across borders, they probably would have confidently told you that there was no way: the virus isn't transmitted very easily, and people usually get so sick and die so quickly, it has little opportunity to infect a new host.

Then came 2014, the year that is rewriting  the Ebola rulebook. More people have died from the virus in the last nine months than the total number of deaths since the first recorded outbreak in 1976. The virus has also popped up in enough countries — first Guinea, then Liberia, Sierra Leone, Nigeria, and now Senegal — that the cases add up to the world's first Ebola epidemic. 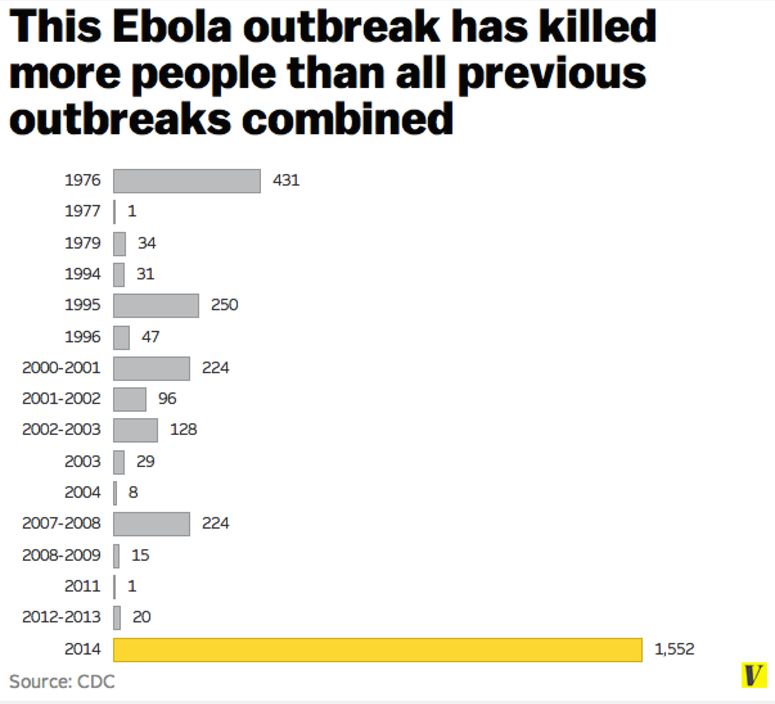 How did Ebola spiral so badly out of control?

There are a few obvious features that have made this outbreak different and more violent: the virus hit unprepared countries in West Africa that had no previous experience with Ebola, and it quickly moved to densely populated urban hot spots (as opposed to isolated, rural areas where the virus typically popped up in Central and East Africa).

But there are other more subtle factors that are helping Ebola survive today for the first ever Ebola epidemic. They hold lessons for public health responses of the future on how to better contain such a deadly disease.

In Uganda, as soon as an Ebola case is identified, public health officials overwhelm all streams of media with messages about how to stay safe. People won't leave their houses out of fear of infection, and they immediately report suspected cases to surveillance officials. It's one of the reasons Uganda has successfully stamped out four Ebola outbreaks, even ones that have turned up in urban areas.

Ishmeal Alfred Charles, who has been working on the Ebola front-line in Freetown, Sierra Leone, said there was little awareness about Ebola until late July, about four months after the first suspected cases emerged in the country.

"It only got serious when we lost Dr. Sheik Umar Khan," he said of the prominent local Ebola physician whose July 29 death made international headlines. "That's when the political wheels (started turning) and the government started putting resources together to help."

Charles also noticed that, in the initial periods of the outbreak, most of the public-health messaging about Ebola was concentrated on mainstream media, including TV and radio, so it was mainly reaching the middle- and upper-classes of the country.

"Not a lot of people have access. We're talking about people who are living in very poor communities so they basically have little or no Internet or TV or to radio."

For this reason, by the summer, Charles — who works as a program manager with the Catholic aid agency Caritas — took to the streets to spread the word. "We get people out into small communities to talk to people (about Ebola)," he said. "We gave megaphones to our community volunteers and told them to go public places, to markets, to houses." Of course, the message came too late and Ebola has now reached almost every district in Sierra Leone.

Health campaigning and raising health literacy is not easy in places where people can't read. As you can see in the map below, the countries that are now most affected by Ebola  — Guinea, Liberia, and Sierra Leone, circled in green — are also the ones with the lowest literacy rates in the world.

The low levels of literacy, poor access to health information, and delayed public-health campaigning only fueled the Ebola rumor mill. There's no proven treatment for Ebola but lies about supposed cures have spread fast. One persistent myth has been that hot water and salt can stop Ebola. Others suggest faith healing or hot chocolate, coffee and raw onions will stamp out the virus. Homeopathy has also emerged as a supposed Ebola crusher.

In the US, the the FDA has warned consumers to watch out for Ebola quackery, while African public health officials are getting creative to debunk the lies. The electro-beat song 'Ebola in Town' was created to set the record straight about how to avoid the illness. "Ebola, Ebola in town. Don't touch your friend! No kissing, no eating something. It's dangerous!"

In Lagos, Nigeria, the local government resorted to hiring a "rumor manager" to help wage a war on the misinformation that is swirling about. "The rumors themselves can actually cause a lot of damage," Lagos state Commissioner for Health Jide Idris told reporters. And he has reason to be worried. If this disease starts to take off in Lagos - Africa's largest city, population 22 million - some say this could "instantly transform this situation into a worldwide crisis."

4) Sierra Leone, Liberia, and Guinea are some of the poorest countries in Africa with fragile health systems

Before the Ebola outbreak, the three countries hardest hit this year had very weak health systems and little money to spend on health care. Less than $100 is invested per person per year on health in most of West Africa and these countries record some of the worst maternal and child mortality rates on the planet.

So resources were already extremely constrained when Ebola hit.

Daniel Bausch, associate professor at the Tulane University School of Public Health and Tropical Medicine, who is working with the WHO and MSF on the outbreak put it this way: "If you're in a hospital in Sierra Leone or Guinea, it might not be unusual to say, 'I need gloves to examine this patient,' and have someone tell you, 'We don't have gloves in the hospital today,' or 'We're out of clean needles,' - all the sorts of things you need to protect against Ebola."

In these situations, local health-care workers — the ones most impacted by the disease — start to get scared and walk off the job. And the situation worsens. In Liberia, nurses have gone on strike because of Ebola. When Bausch was in Sierra Leone in July, he and other doctors were left scrambling during a nurse strike, too. "There were 55 people in the Ebola ward," he said, "and myself and one other doctor."

He'd walk into the hospital in the morning and find patients on the floor in pools of vomit, blood, and stool. They had fallen out of their beds during the night, and they were delirious. "What should happen is that a nursing staff or sanitation officer would come and decontaminate the area," he said. "But when you don't have that support, obviously it gets more dangerous." So the disease spread.

These countries also had spotty disease surveillance networks. "We're dealing with countries with very poor health systems to start with," said Estrella Lasry, the tropical medicines adviser for MSF. "That goes from setting up surveillance systems through setting up networks of community health workers."

By contrast, places that have been able to fight off the virus in the past — like Uganda — have robust disease surveillance systems, said Lasry. That means that suspect cases can be tested and reported on quickly, and that information can spread through the surveillance network in the country as fast as possible so that prevention measures and public-health campaigns are implemented right away.

While there's no way to completely prevent another outbreak from happening, she said, "We can prevent spread by putting the appropriate measures in place so we can identify Ebola and stopping transmission as quickly as possible."

"Ebola is a very preventable disease," said Lawrence Gostin, a health law professor at Georgetown University. "We've had over 20 previous outbreaks and we managed to contain all of them."

But this time, the international response just wasn't there. "There was no mobilization," Gostin said. "The World Health Organization didn't call a public health emergency until August — five months after the first international spread."

Part of the reason for the slow response can be attributed to cuts at the WHO that have left the agency understaffed and under-resourced.

But Gostin said this epidemic has also revealed how poorly designed and unready our global systems seem to be for epidemics. In an article published today in the Lancet, he offered this wake-up call for future outbreaks:

"How could this Ebola outbreak have been averted and what could states and the international community do to prevent the next epidemic? The answer is not untested drugs, mass quarantines, or even humanitarian relief. If the real reasons the outbreak turned into a tragedy of these proportions are human resource shortages and fragile health systems, the solution is to fix these inherent structural deficiencies."

7) The countries most affected — and our world — is increasingly interconnected.

The most worrying vector of spread in any epidemic or pandemic is the traveler. And in this outbreak, the three worst-hit countries shared very porous borders, where the disease could easily hop across in people moving around for work or to go to the market.

But Dr. Bausch said this West African outbreak should also serve as a reminder that we live in an increasingly interconnected planet.

"Even from the most remote areas of our world, people are getting more and more connected," he said, "sometimes nationally, sometimes internationally."

This is the new normal, he said, and it should rewrite how public health officials think about Ebola going forward.

"The various different features of this outbreak —where we have an outbreak cutting across international boundaries, involving urban areas — we can think of this as the new norm and we have to be concerned this can happen every time because of the connectivity of places."

Text by Vox
We also reccomend

Ebola Lockdown Brings Sierra Leone Capital to a Halt
Streets in the capital of Sierra Leone were deserted on Friday as the West African state began a contested, three-day lockdown in a bid to halt the worst Ebola outbreak on record.

Ebola Cases Could Reach 1.4 Million Within Four Months, C.D.C. Estimates
Yet another set of ominous projections about the Ebola epidemic in West Africa was released Tuesday, in a report from the Centers for Disease Control and Prevention that gave worst- and best-case estimates for Liberia and Sierra Leone based on computer modeling.

Ebola Outbreak: 'It's Even Worse Than I'd Feared'
"It's even worse than I'd feared," Dr. Tom Frieden, director of the Centers for Disease Control and Prevention, said Wednesday of the Ebola outbreak rampaging through West Africa. "Every day this outbreak goes on, it increases the risk for another export to another country.

Two Vaccines to Protect Against Ebola Could Be Available Within Weeks
Two potential vaccines against the deadly Ebola virus ravaging West Africa could be available as soon as November and would first be given to health care workers most at risk of exposure to the disease there, the World Health Organization announced on Friday.
Tags:
ebolawest africa