Motorola’s Moto X and Moto G were two of the best smartphones of 2013. For 2014, the company is revising these acclaimed handsets. The second-generation Moto X and Moto G models just might eclipse their predecessors in every way.

Large and in charge
The new Moto X is a bigger, more beautiful smartphone thanks to its larger 1080p, 5.2-inch screen and premium design materials. Gone are the plastics of last year’s phone, and in their place is an aluminum frame that adds to the handset’s durability and good looks. 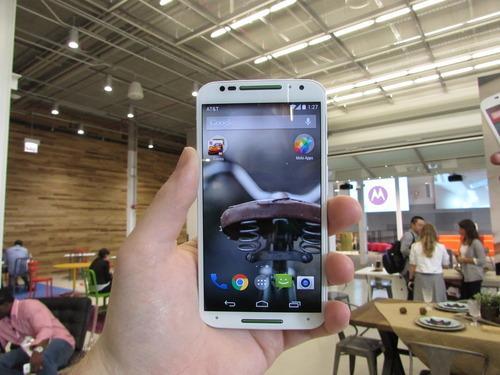 Despite its larger size, the new Moto X is actually a hair thinner than its predecessor. It is also a bit heavier, at 5.1 ounces, compared with the original Moto X’s 4.9 ounces. But when I held the two devices, I could barely tell the difference.

Like the original Moto X, the new Moto X features Motorola’s Moto Maker customization service. The service allows you to order your Moto X online and completely customize the way it looks, right down to the color of the ring around its rear camera.

This time around, Motorola is offering new materials for the Moto X’s rear panel. Whereas last year you could order your Moto X with a wood back, you can now order it with leather. Motorola has also added a host of new color options, so there are literally thousands of ways to customize your phone. 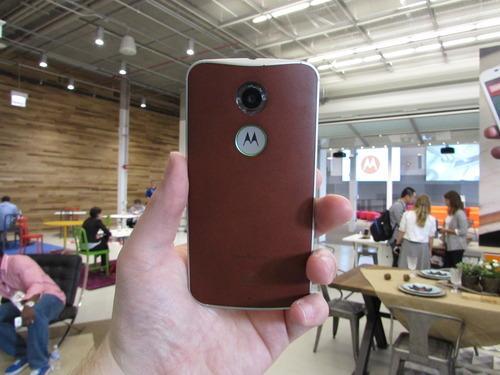 I held a leather-backed Moto X, and I’ve got to say, it felt smooth as silk. If you’re worried about the leather tearing, fear not. Motorola told me that it tested the leather just as it does any other material. In other words, it’ll be fine.

So you can, for example, post to Facebook without ever touching the phone. What’s more, you no longer have to say, “OK, Google” to wake the phone. Instead, you can customize the handset to respond to any name you want. Yes, any name.

Motorola has also stepped up the phone’s Moto Assist feature. With the original Moto X, Moto Assist could be set to automatically silence all notifications when you were in a meeting or behind the wheel. Now, Moto Assist can detect when you’re driving and read your texts to you. You can also respond with voice controls. 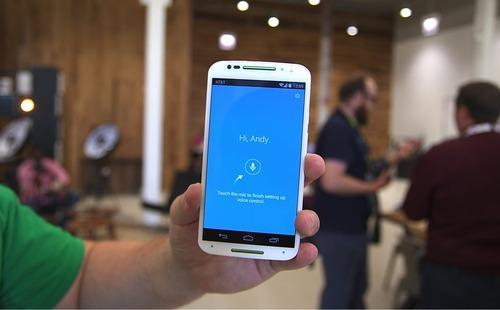 The Moto Display feature found on the first-generation Moto X, previously known as the Always-on display, also gets an update. In its first incarnation, Moto Display showed your notifications in white icons on the phone’s screen when the handset was locked.

On the new Moto X, Moto Display not only shows icons, but it can also show you your notification text without unlocking your phone.

The Moto X’s camera also gets a boost from the original’s 5 megapixels to 8 megapixels. Motorola has even moved the camera’s flash to its lens ring, to ensure smooth, even lighting for each photo.

One of the camera’s best features is its ability to detect motion in your photos. If it determines that there is too much movement, the Moto X will take a picture before you press the shutter button. You can then compare the Moto X’s photo with the one you took to make sure you get the best picture.

An upscale midranger
Motorola’s new Moto G is a midrange smartphone with the heart of a premium handset. Like the new Moto X, the Moto G gets a revamped look, including a larger 5-inch, 720p display and a pair of stereo speakers above and below the screen. 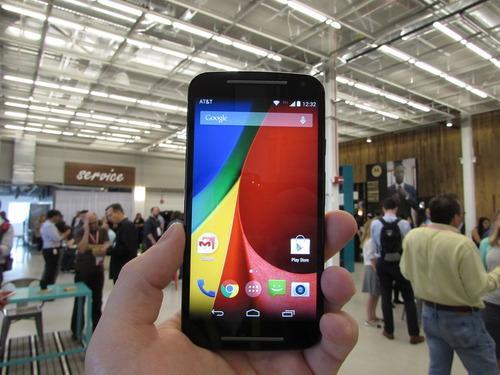 The Moto G’s larger display also means it’s a little heavier than the original Moto G, though slightly thinner than the previous G. Though it doesn’t get the Moto X’s Moto Maker service, the Moto G can be customized in its own way with colorful interchangeable rear covers.

One of the big additions to the Moto G is also one of the smallest: a microSD slot. Motorola reps told me the feature was one of the most frequently requested by owners of the original G. 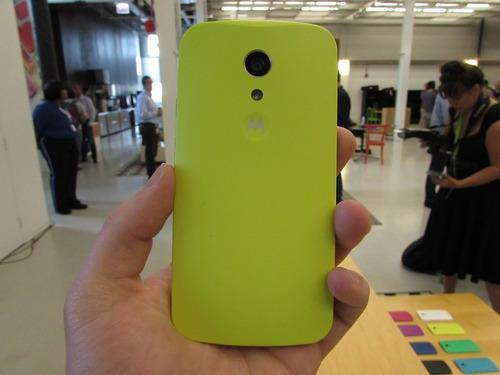 As with the Moto X, the new Moto G also gets improved rear and front cameras, as well as improved voice controls and Motorola’s Moto Display.

The one downside to the Moto G is that it’s 3G only, so you won’t get high-speed LTE connectivity. But Motorola released a 3G-only version of the first Moto G followed by an LTE version, and we expect the company to do the same thing this time around, too.

A headset that looks good
In addition to the Moto X and Moto G, Motorola also debuted a nifty new Bluetooth headset. The Moto Hint sits in your ear and is able to pick up your voice without needing an extended microphone.

Motorola outfitted the Moto Hint with the same premium materials as the Moto X, including wood and leather. And with its voice controls, you can take advantage of all the Moto X’s slick features without ever touching it.

Video shows possible new iPhone 7 without headphone jack
The rumors surrounding the next version of Apple's iPhone have, as usual, spanned a wide range of possibilities. Now, however, we may have something a bit more concrete.

Android bug fear in 900 million phones
Serious security flaws that could give attackers complete access to a phone's data have been found in software used on tens of millions of Android devices.