uk
Protesters disrupted flights at Heathrow Airport by cutting through a fence and chaining themselves together on a runway.

Direct action group Plane Stupid said 13 demonstrators opposed to the airport's expansion plans got on to the northern runway at 03:30 BST.

The runway was closed for nearly three hours and 13 flights were cancelled.

The ability of protesters to get through a fence and on to the runway has raised security concerns.

The airport apologised for the disruption caused and advised passengers to check with their airlines before they travel.

All the protesters were removed from the runway by 10:00 BST.

The airport's southern runway remained open throughout the protest.

"This morning a group of people staged a protest on the northern runway. These individuals have since been removed by police.

"Both runways were operational throughout, although there have been some delays and a few cancellations - we are sorry to those passengers who experienced disruption this morning," said the airport in a statement. 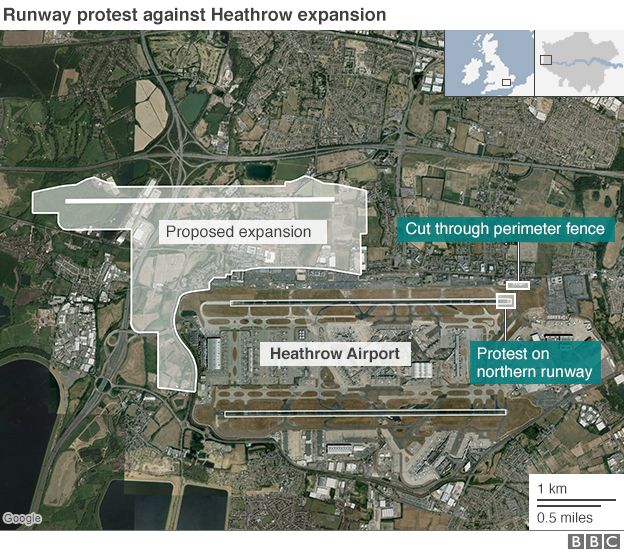 The airport said the first flight was meant to take off from the northern runway at about 06:00 BST. The runway reopened at 06:20.

Independent air transport consultant John Strickland said the protesters entered the runway when flights were restricted, but he added they must have known they would "have an impact when the airport opened".

Heathrow does not schedule any departures from 23:00 until 06:00 due to noise restrictions.

"If they did manage to get to a runway before being apprehended then there is a bit of an issue," he said.

"If a terrorist group came up to the fence it would take a few minutes to cut through."

A video posted online appeared to show several activists chained together and being spoken to by police officers.

In the footage, an officer told them: "As a consequence of you being here, you are causing severe disruption and it will be in the millions of pounds because it will take us a while to remove you.

"The cost will be in the couple of millions. The airport will attempt to make a civil recovery."

The Met Police said the protesters had chained themselves together using a tripod which they had assembled themselves.

Ella Gilbert, one of the activists on the runway, said: "It's those who fly frequently and unnecessarily who are driving the need for expansion, and we cannot keep ignoring the terrifying consequences of flying like there's no tomorrow."

At least seven British Airways flights from Terminal 5 were cancelled, a spokesman from the airline said: "We are doing everything we can to minimise disruption to our flights."

Louise Rogers, 35, and Ciara Lalor, 34, had their flight to Dublin cancelled.

Ms Lalor said: "They shouldn't be allowed. Get the fire engine out and hose them down."

On 1 July a report recommended a new runway should be built at Heathrow rather than Gatwick.

The Airports Commission said Heathrow was best placed to provide "urgently required" capacity, but environmentalists warned building a new runway there would make it harder to reduce air pollution and climate change emissions. 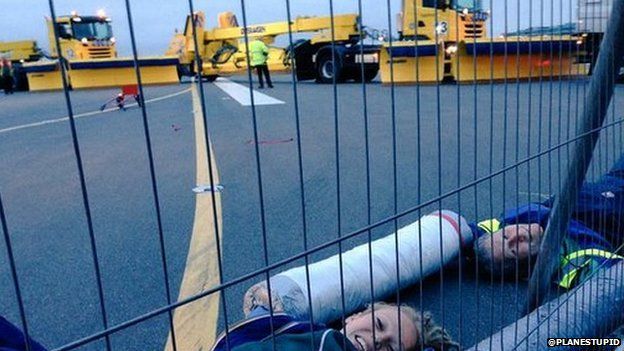 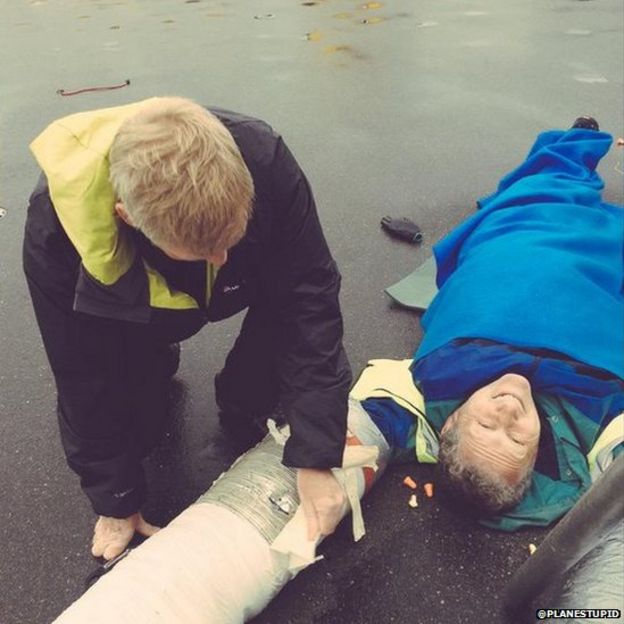 Tartan-clad performers, spinning oversized Tunnock's tea cakes and a giant kilt were among the highlights at a feel-good Commonwealth Games 2014 opening ceremony on Wednesday night.

L'Wren Scott, a noted fashion designer who has been Mick Jagger's companion for more than a decade, was found dead in her New York apartment Monday of an apparent suicide, according to a law enforcement official familiar with the investigation. She was 49.