accidentsmeccasaudi arabia
A construction crane crashed through the roof of the Grand Mosque in Mecca, killing 107 people and casting a grim shadow on a yearly pilgrimage that draws millions to Saudi Arabia.

At least 238 others suffered injuries when a powerful storm toppled the crane, according to the nation's civil defense authorities.

The crane fell 10 days before the start of the Hajj, an annual pilgrimage expected to bring 2 million people to Mecca.

The mosque is the largest in the world and surrounds Islam's holiest site known as the Kaaba.

Witnesses posted photos and video on social media showing the crane crashing through the mosque roof. Scores of bodies, blood and debris lay scattered across the courtyard.

"We just washed and were getting ready to head to the Masjid al-Haram for the Maghrib prayer (sunset prayer)," said Yahya Al Hashemi, 30, a CNN iReporter who shot iPhone video of the crane striking the roof of the mosque.

"It was a sandstorm which turned to rainstorm and lot of the construction covering boards were flying around, and lots of cracking noises which unfortunately ended with this tragedy. ... Everybody was pushing trying to escape from inside towards the exits," Al Hashemi said.

The storm was so strong, it uprooted trees and broke windows throughout Mecca, said Khaled Al-Maeena, editor at the Saudi Gazette in Jeddah.

The crane fell during a lull in visitors at the mosque, he said.

Construction cranes surround the Grand Mosque, which is undergoing expansions to make the pilgrimage more manageable, he said.

"The irony is that all this expansion was being done to see to the welfare of the pilgrims," he said. 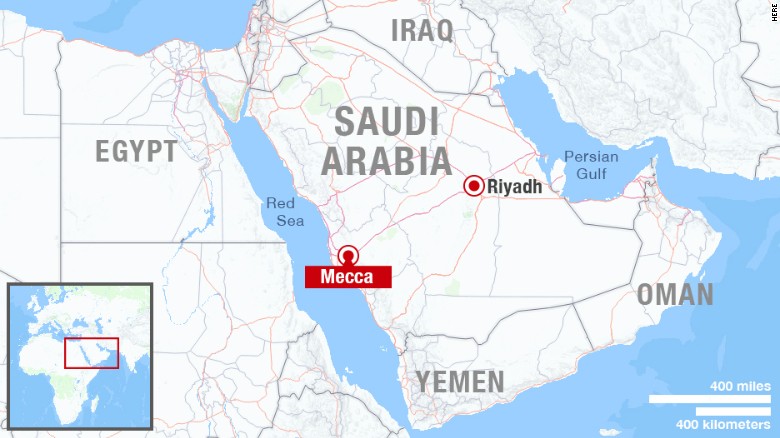 Nations scrambled to account for their pilgrims after the crash.

The Egyptian health ministry said 12 of its nationals were injured while India said it received reports that nine of its pilgrims were wounded.

Pakistan's foreign ministry said that 22 of its nationals were hospitalized in Saudi Arabia with severe injuries. Pakistani embassy officials are headed to Mecca from Riyadh to find out if there were any fatalities.

Saudi officials have not released a breakdown of the nationalities of the casualties.

No stranger to tragedies

Tragedy has hit Mecca before, often because of the throngs of people there for the Hajj.

In 2006, a stampede killed at least 363 people. As with other incidents, it happened during a religious ritual in which the pilgrims stone a symbolic devil.

Islam requires every Muslim who is physically and financially able to make the journey to Mecca at least once in a lifetime.

Hajj occurs two months and 10 days after Ramadan ends, during the Islamic month of Dhul-Hijjah.

Nearly 800,000 pilgrims had arrived in Saudi Arabia by this week for Hajj, authorities said.

An overnight fire at a hospital in southern Saudi Arabia has killed at least 25 people and injured more than 100 others, officials say.