Europehungaryillegal migratio
UN Secretary General Ban Ki-moon has said he is "shocked" after Hungarian police fired tear gas and water cannon to force migrants back from its border.

Mr Ban said such treatment of asylum seekers was "unacceptable".

Hundreds were involved in clashes at the Hungary-Serbia border on Wednesday, trying to breach a razor-wire fence.

More than 5,000 migrants have entered Croatia so far - avoiding Hungary - police say, and another 7,266 entered Germany on Wednesday.

German police said this was more than double the number that crossed the previous day, adding that most were picked up on the border with Austria.

Germany is the final goal of many migrants, as the European Union remains divided over how to deal with the crisis.

Hungary defended its action, saying that 20 police officers were injured as migrants tried to break through a gate, and a spokesman accused migrants of using children as "human shields".

Hungary closed its entire border with Serbia on Tuesday after making it illegal to enter the country or damage the border fence. The country's courts have started fast-track trials of arrested migrants.

More than 200,000 people have already crossed into Hungary this year to enter the EU's Schengen zone, which normally allows people to travel between member countries without restrictions.

Many are now heading for the Croatian border. Croatian police said 5,650 had crossed into the country.

Interior Minister Ranko Ostojic told national TV that the police were currently in control of the situation but if migrants continued to arrive in large numbers the authorities would have to think about taking a different approach.

On Wednesday officials said Croatia would allow migrants to travel to northern Europe.

Several hundred left the border by train, but thousands more have gathered to wait for further trains.

On Wednesday, there were chaotic scenes near the Hungarian town of Horgos, with fires burning and police vehicles and ambulances arriving on the Serbian side of the border, across from massed ranks of riot police on the other side.

Some migrants threw missiles, including stones and water bottles.

The firing of tear gas and water cannon created a stampede of migrants away from the border.

Several people received treatment from the Serbian ambulance service, some suffering the effects of tear gas.

Migrant Amir Hassan, from Iraq, said: "We fled wars and violence and did not expect such brutality and inhumane treatment in Europe."

Serbia has said it will send additional police to its border with Hungary. 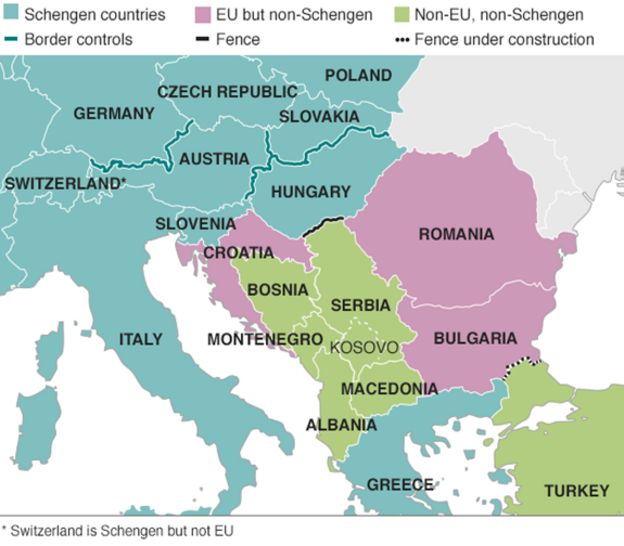 The euro edged back towards the previous day's five-month high on Tuesday after posting its biggest one-day rise since June, on growing confidence that the market-friendly Emmanuel Macron would beat far-right rival Marine Le Pen to become the next French president.

The euro hit its weakest in more than six months against the yen on Monday as investors sought safety in gold and low-risk government debt after Friday's attacks in Paris.

Refugees Break Through Police Lines and March on Hungary Highway

Hundreds of migrants have climbed over police fencing and begun to walk to Budapest. The move follows frustration over the long registration procedures and their treatment in the interim.

Austria said on Sunday it planned to end emergency measures that have allowed thousands of refugees stranded in Hungary into Austria and Germany since Saturday and move step by step "towards normality".

Hungary's leader says the migrant crisis facing Europe is a "German problem" since Germany is where those arriving in the EU "would like to go".

Hundreds of Migrants Protest at Budapest Station, Want to go to Germany

Hundreds of migrants protested in front of Budapest's Eastern railway station on Wednesday, shouting "Freedom, freedom" and demanding to be let onto trains bound for Germany but the station remained closed to them.