Pro-independence leaders in Catalonia have vowed to press ahead with plans to break away from Spain, despite a decision by the Constitutional Court to suspend the secession process.

Catalan Vice-President Neus Munte said it was the political will of the regional government to carry on with plans for independence in 18 months.

Spain's government earlier appealed to the Constitutional Court to intervene.

The court warned Catalan leaders they needed to comply with the order.

"If they fail to comply with the suspension, they may commit disobedience," read the ruling by the Madrid-based high court.

Catalonia's regional parliament on Monday passed a motion to start the secession process, stating an aim of independence within 18 months, and giving 30 days to start legislation on a Catalan constitution, treasury and social security system.

Prime Minister Mariano Rajoy earlier on Wednesday announced he had taken the case to the Constitutional Court. He called the motion a "blatant disregard for the state's institutions" and accused the pro-secessionists of "trying to do away with democracy".

"We're talking about the defence of an entire country. They are trying to liquidate the unity of a nation with more than five centuries of history," he said.

In a judgement that had been expected, the court's 11-judge panel agreed to hear the government's lawsuit against the Catalan move, meaning the motion is automatically suspended for a number of months while legal hearings are held.

The panel also agreed to Madrid's request that the judges "personally" notify acting Catalan President Artur Mas, his cabinet and the president of the regional assembly, Carme Forcadell, of the consequences should they decide not to abide by the court's ruling.

The pro-secession parties had fully expected their move to be declared illegal and as part of the motion had argued that the court lacks legitimacy.

Speaking at a news conference after the court ruling, Ms Munte said: "The political will of the government of Catalonia is to go ahead with the content of the resolution."

One of the Catalan independence leaders, Oriol Junqueras, tweeted: "The will of the Catalan people cannot be suspended. We are committed to continue with our democratic mandate."

Opinion polls suggest a majority of Catalans favour a referendum on independence, but are evenly divided over whether to secede.

Catalan nationalist parties secured a majority of seats in September's elections but fell short of winning half the vote. They said before the vote that they considered it a de facto referendum on independence from Spain.

Two big separatist parties make up the "Together for Yes" ("Junts pel Si") coalition but they needed the help of the far-left CUP (Popular Unity) party to secure an absolute majority in the Catalan parliament.

Artur Mas, who has spearheaded the drive for secession, has been trying to win re-election as Catalonia's president but has failed to secure the approval of the far-left party. The CUP has called for another Together for Yes candidate, Raul Romeva, to take over the leadership role.

Several parties oppose secession in Catalonia, including the Catalan Socialists and Citizens (Ciudadanos), a centre-right party which was born in the north-eastern region but has attracted increasing popularity across Spain.

Its leader, Albert Rivera, said earlier this week: "To those Catalans who want independence: the solution is not to break up the country, it is to reform it."

The rise in tensions between Madrid and Catalonia comes just weeks before Spaniards vote in the general election, on 20 December. It is not yet clear who will win the election but every party will want wealthy Catalonia to remain a part of Spain, observers say. 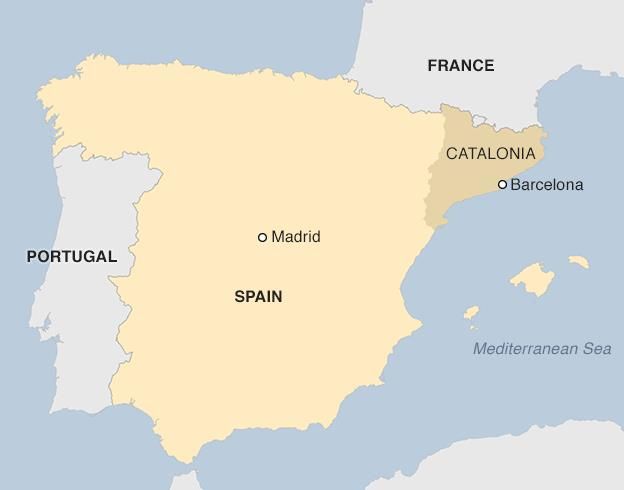 Metro, roads disrupted in Catalonia pro-independence protest
Metro stations were closed in Barcelona, pickets blocked roads and state workers walked out on Tuesday in protests across Catalonia over a Spanish police crackdown on a banned independence referendum.

At least 73 dead as quake rocks central Italy
At least 73 people were reported killed and dozens more were missing or feared dead Wednesday after a magnitude-6.2 earthquake and a series of aftershocks struck several towns in central Italy, toppling scores of buildings, according to Italy’s civil protection agency.