Apple Just Revealed the Future of Its Retail Stores

In downtown San Francisco, situated across the street from the city's iconic Union Square Park, Apple's newest vision for retail is close to being realized.

The numerous figures are meant to impress. They illustrate both the scale of the store and the absurd lengths Apple is willing to go to design real-world retail destinations that inspire awe. As the new West Coast flagship store, this location, designed in partnership with UK firm Fosters and Partners, certainly checks those boxes. Speaking today at a press preview of the location, Apple's retail VP Angela Ahrendts says the new outlet sets the standard for the future of Apple retail. The company wants its stores to be integrated into the community, as a kind of town square for anyone and everyone. "The over-arching vision of the future of Apple retail ... is what do we want Apple's role in the community to be," Ahrendts says. "The store becomes one with the community."

Apple stores may not generate anywhere near the revenue of the company's online counterpart. Yet for the last 15 years, they have acted as Apple's real-world footprint, a way to set apart how it communicates with customers and leaves its mark on cities around the world. From New York's 5th Avenue glass cube to the iconic Norman Foster-designed Istanbul Apple Store, the company uses these retail outlets to become part of the urban landscape and show off its dedication to forward-thinking design. They're Apple's way of moving from smartphones and laptop screens to the physical spaces we spend time in. "We think of this as our largest product," Ahrendts says.

To further emphasize this point, Apple has introduced a suite of changes, all of which will be coming to future flagship stores, to how it organizes its retail setup. The Genius Bar, where can make an appointment to get hands-on customer service, is now the Genius Grove, accented by literal trees and open spaces. The company is also introducing what it calls "windows." Located in "the avenue," these are displays designed to change with the seasons and cycle through interactive themes, like iPhone photography, Apple Music, and iOS apps. Apple is hiring what it's calling creative pros to stand at these stations and offer advice and tips depending on the theme.

The board room, another new addition, is a faux conference setup Apple designed for small businesses and startups to come and get advice from app developers and other entrepreneurs. The 6K video screen, located on the second floor, is officially called the forum. It will feature creative sessions with local experts dedicated to art and music, photography, gaming, and other Mac and iOS-centric topics. Apple says it also plans to debut new Apple Music exclusives on the screen as well.

And then there's the windows. The entire, 42-foot street-facing wall is comprised mostly of glass, separated only by tall silver beams. At the press of a button, the doors can separate and turn the Apple Store into an open-faced mall of sorts. In the minds of Apple's designers — including Jony Ive, who was deeply involved in the store's construction — the removal of the glass makes the store an extension of the city itself.

"We have a deep commitment to the cities we work in, and are aware of the importance that architecture plays in the community," Ive, Apple’s chief design officer, said in a statement. "It all starts with the storefront — taking transparency to a whole new level — where the building blends the inside and the outside, breaking down barriers and making it more egalitarian and accessible." The outdoors plaza, which Apple says it's gifting to the city of San Francisco, is a new fixture the company says will be coming to other flagship stores around the world. Apple plans to hold a regular weekend series featuring local artists who will perform and then give talks about their craft.

There's no doubt this location, and the others that adopt its new features, will shift how customers think of Apple retail. Whether the company can become an artistic centerpiece for communities will still depend on how sincere it is about bringing in local talent and using its space for more than just marketing. But as it has in the past, Apple appears intent on making sure its stores are destinations distinct from the act of buying a new iPhone. "This is more than just a store," Ahrendts says. "We want people to say, 'Hey, meet me at Apple.'" 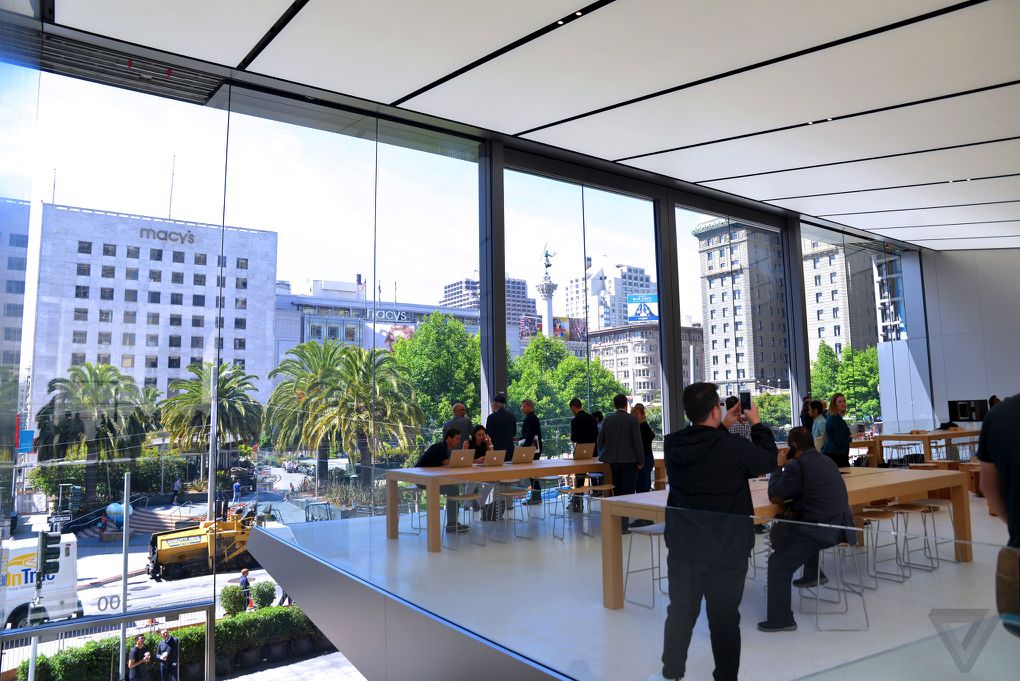 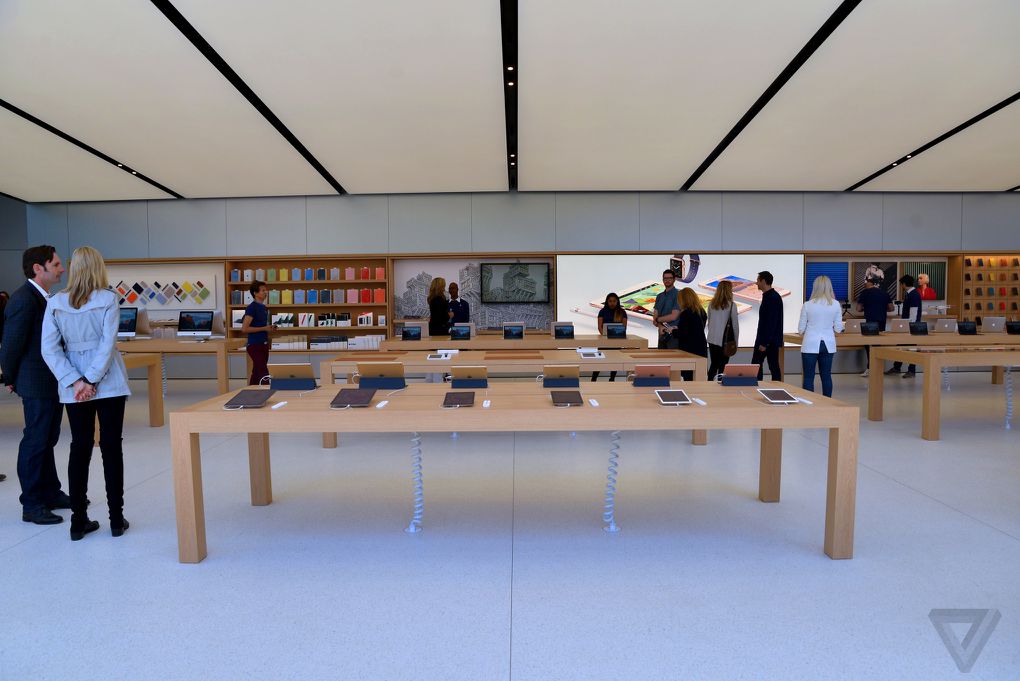 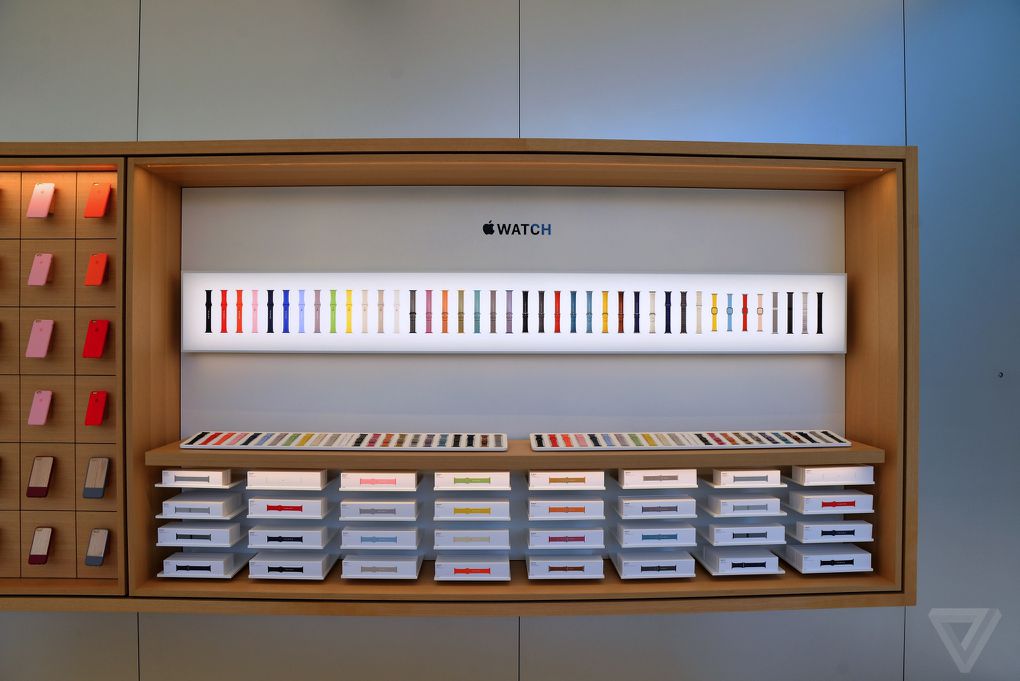 Text by The Verge
We also reccomend

Apple Wins Ruling In New York iPhone Hacking Order
A federal magistrate judge on Monday denied the United States government’s request that Apple extract data from an iPhone in a drug case in New York, giving the company’s pro-privacy stance a boost as it battles law enforcement officials over opening up the device in other cases.

Apple iPhone 6 Photos Leaked, Samsung Group May Need to Worry
It was long rumored that the new Apple iPhone will feature a larger 4.7 inch display but there was no way of knowing for sure as the iPhone 6 looks and specifications had been a well-kept industry secret. Until now, that is.

Apple Chief Tim Cook: 'I'm Proud to Be Gay'
Apple chief executive Tim Cook has publicly acknowledged his sexuality, saying that he is "proud to be gay".

Don’t Set Your iPhone Back to 1970, No Matter What
AN IPHONE BUG has arisen, as they do from time to time, that will render your device completely unusable. In this case if you set its clock to January 1, 1970, it’s brick city
Tags:
appleretailUS