indiaNarendra Modi
Indian Prime Minister Narendra Modi took on critics who accuse him of failing to pursue “big bang” liberalization measures to revamp his country’s economy, saying he has set a path for accelerated growth that India’s states now need to help navigate.

In an interview in his residence compound Wednesday, on the eve of his second anniversary in office, Mr. Modi said he had opened up more of the economy to foreign investment and made changes to curb corruption, fill gaps in rural infrastructure and make it easier to do business.

“I have actually undertaken the maximum reforms,” Mr. Modi said. But, he added, “I have an enormous task ahead for myself.”

In a visit to Washington early next month, Mr. Modi will deliver his message that India—the world’s fastest-growing major economy—is ready for a more prominent role on the world stage. He is to meet President Barack Obama and address a joint session of the U.S. Congress.

India traditionally has been a nonaligned country reluctant to play a prominent role in global affairs. But over the past decade, it has formed ever-stronger links with the U.S. “Today, unlike before, India is not standing in a corner,” Mr. Modi said.

The election victory of Mr. Modi and his Bharatiya Janata Party in 2014 stirred hopes of a fundamental reset for an economy that had long failed to keep pace with the industrialization and development of its East Asian neighbors.

Two years later, while Mr. Modi has pursued a series of incremental, and not always glamorous, changes aimed at re-energizing a struggling economy, he hasn’t emerged as the rapid liberalizer that some investors had hoped.

Mr. Modi last year dropped legislation that would have made it easier to acquire farmland for industry and infrastructure—a measure that Finance Minister Arun Jaitley declared would “determine a very large part of the progress India makes.”

The difficulty of obtaining land is widely cited by government officials and investors as a critical problem that has held back development of industry and badly needed infrastructure. But protests by opposition parties, which portrayed the move as anti-poor, and rural voters made BJP politicians nervous and they retreated.

On Wednesday, Mr. Modi said that efforts to amend the law at the federal level were “over now,” and said it was up to individual states to pursue changes.

The prime minister also said he would look to states to further liberalize the country’s rigid labor laws, another area seen as crucial and contentious. Few of them, including states controlled by the BJP, have made much headway. 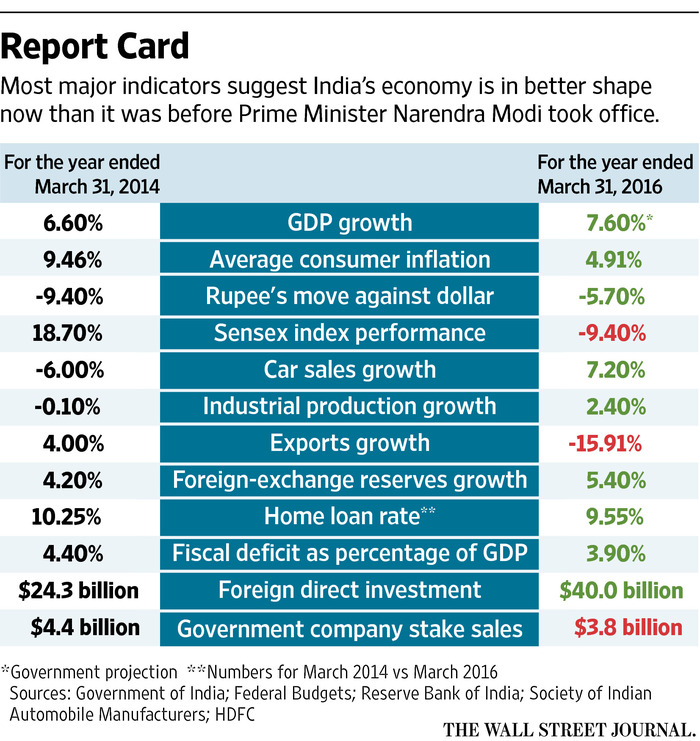 Across a range of policies, Mr. Modi often touts a middle way. For instance, the prime minister expressed reluctance to sell state-owned enterprises, saying they play an important role in the economy. But he pointed to progress in divesting minority stakes in them and to increasing the participation of private companies in sectors once dominated by the state.

“In any developing country in the world, both the public sector and the private sector have a very important role to play. You can’t suddenly get rid of the public sector, nor should you,” he said.

Similarly, on social welfare, Mr. Modi has worked to make subsidies more targeted and reduce corruption in their delivery, rather than drastically changing benefits systems.

India’s economy has rebounded, expanding 7.6% in the year that ended March 31, after the country’s statisticians revised the way they calculate gross domestic product. The government’s budget deficit has narrowed significantly and inflation is down, helped by lower oil prices.

Narendra Modi took office as prime minister of India, the world's largest democracy, two years ago, pledging to improve the nation's fortunes. Here are five ways India has changed since then.

Loosened restrictions on foreign investment in businesses from insurance to defense, and Mr. Modi’s impassioned sales pitches on trips around the world, have helped prompt a sharp uptick in foreign direct investment, which rose 29% to $40 billion in the latest fiscal year.

“When I came to the government, I used to sit down with all the experts and ask them to define for me what is the ‘big bang’ for them,” Mr. Modi said. “Nobody could tell me.”

Mr. Modi said that many of the changes he has put in place would have been regarded in previous administrations as difficult to implement, but now that he has done them, to his critics they no longer qualify as “big bang.”

One measure that would clearly provide a major impetus to the economy is a long-pending goods and services tax, known as the GST, which would replace a web of varying state taxes with a more business-friendly national levy.

But Mr. Modi has been unable to steer the required legislation through a gridlocked upper house of Parliament, where his BJP is in the minority. The government’s chief economic adviser said it would be reintroduced in the next session of Parliament in July.

Mr. Modi said he expects the legislation to pass this year.

The U.S. wants India to become economically and militarily strong enough to serve as a credible counterweight to a rising China, which is remaking the balance of power in Asia, and defense cooperation between the U.S. and India has deepened.

India has joined Washington in its calls for freedom of navigation, especially in the South China Sea, where China’s assertion of its territorial claims has unnerved neighbors. But on Wednesday the prime minister played down any friction with China, pointing to increasing trade and diplomatic exchanges between the two nations.

In the “relationship between China and the U.S., there are areas where they have substantial differences but there are also areas where they work closely,” Mr. Modi said. “This is the new way. If we want to ensure the success of this interdependent world, I think countries need to cooperate, but at the same time we also need to ensure that there is respect for international norms and international rules.”

While some other world leaders, including British Prime Minister David Cameron, have condemned U.S. presidential hopeful Donald Trump for his proposal to temporarily ban Muslims from the U.S., Mr. Modi declined to comment.

“These are issues of debate in the election. A government shouldn’t respond to that,” he said. “As a part of the election debate many things will be said there, who ate what, who drank what, how can I respond to everything?”

India has more than 170 million Muslims, who account for 14% of the country’s population.

Indian Prime Minister Narendra Modi prepares this week to address global business and political leaders in Davos, Switzerland, as his country passes France and the U.K. to become the world’s fifth-largest economy, underscoring the South Asian nation’s drive for recognition as a great power.

You don’t have to step out of the house to see the panic among Indians in the aftermath of country’s big demonetization push. Just go to your smartphone’s app store.

Narendra Modi Struggles to Fulfill His Plan to Rejuvenate India

After a Year of Outsize Expectations, Narendra Modi Adjusts His Plan for India

tanding before India on the first anniversary of his swearing-in, Prime Minister Narendra Modi on Monday gave a speech that was notable for the subjects it avoided: Large-scale job creation. Manufacturing. Urbanization.