Microsoft founder Bill Gates has launched a campaign to help extremely poor families in sub-Saharan Africa by giving them chickens.

The billionaire and philanthropist says raising and selling the birds can be efficient to tackle extreme poverty.

He has promised to donate 100,000 chickens, and the project's page has already been shared thousands of times.

The UN estimates that 41% of people in sub-Saharan Africa live in extreme poverty. 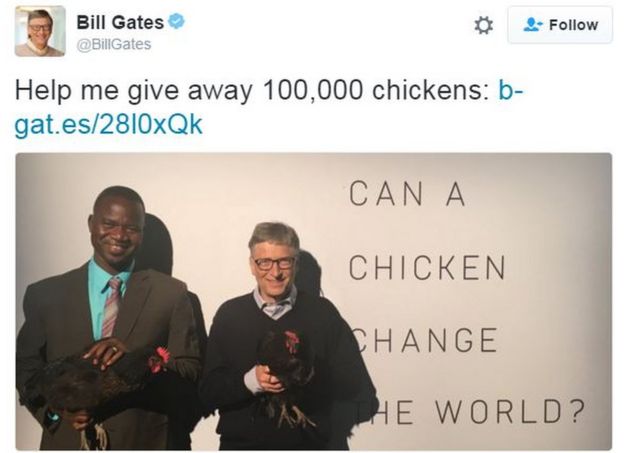 "These chickens are multiplying on an ongoing basis so there's no investment that has a return percentage anything like being able to breed chickens," he said at the launch of the campaign in New York.

You can't fault the sentiment.

Giving away 100,000 chickens in an effort to alleviate poverty is a noble gesture in itself. But the plan throws up a few questions.

As the chicken population increases, where is the feed going to come from? Will more arable land have to be given over to growing chicken feed?

Also, with more chickens on the market, simple demand/supply economics suggests the average price of a chicken would fall.

There's also the issue of dumping.

The US, the European Union and Brazil are accused of selling chickens into African markets at prices way below what local farmers can afford to sell them for.

But all this doesn't mean that Mr Gates' plan shouldn't be tried. If there's even a small chance of success it needs to be done.

Nay-sayers and cynics may flap and cluck about such a plan, but at least when it comes to helping Africa's poor, Bill Gates has once again proved that he isn't chicken.

What else has Bill Gates done?

Robots that take people's jobs should pay taxes, says Bill Gates
ill Gates has called for a tax on robots to make up for lost taxes from workers whose jobs are destroyed by automation.

Oxfam: Eight men are as rich as half the world
The gap between the super-rich and the poorest half of the world's population is starker than previously thought, with just eight men, including Bill Gates and Michael Bloomberg, owning as much wealth as 3.6 billion people, according to an analysis by Oxfam released Monday.
Tags:
Bill GatescharityPovertysub-Saharan Africa