The flight from Paris to Cairo plunged into the Mediterranean Sea on 19 May, killing all 66 people on board.

Automated electronic messages sent by the plane had shown that smoke detectors went off in a toilet and in the avionics area below the cockpit, minutes before the plane disappeared.

The recorded data are consistent with those messages, investigators said.

The voice and flight data recorders, known as black boxes, were recovered from a depth of about 3,000m (9,800ft) in the Mediterranean.

The second black box, the cockpit recorder, is still being repaired in Paris.

The Egyptian investigation committee also said that part of the front section of the aircraft's wreckage "showed sign of high temperature damage" and soot.

No distress call was made from the plane prior to the crash. The cause remains unknown. 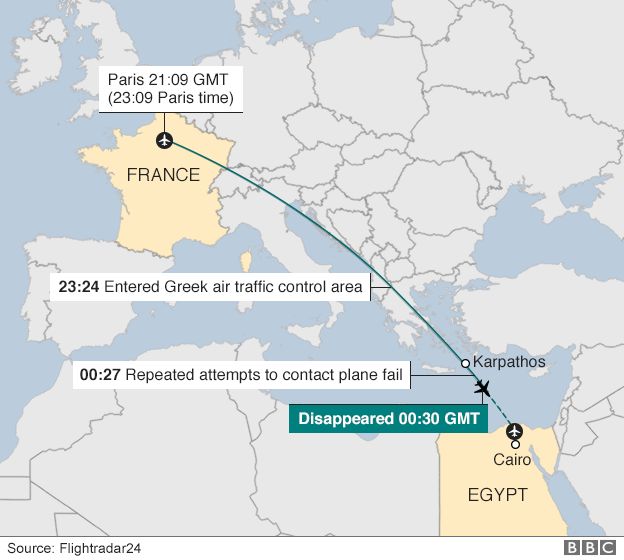 An Emirates flight from India with 300 people on board crash landed at Dubai's main airport on Wednesday, sending black smoke billowing into the air and halting all traffic at the Middle East's busiest airport. Authorities said all passengers were evacuated safely.

Egypt said Thursday it has recovered the cockpit voice recorder from the submerged wreckage of EgyptAir Flight 804, a major breakthrough in the investigation that could help resolve the mystery of why the jetliner plunged into the Mediterranean last month and killed all 66 people aboard.

Wreckage of the EgyptAir flight that went missing over the Mediterranean last month has been found, Egyptian investigators say.

The Egyptian military found the personal belongings of passengers and other debris from an EgyptAir jet floating in the Mediterranean, Cairo said on Friday, confirming that the plane had plunged into the sea with 66 people on board.

Nepal: Plane Goes Missing With 21 on Board