Taxpayers in France are footing the bill, which is €9,895 for a month's work with family benefits and residence allowance thrown in on top. The staggering figure is only €5,000 a month less than Hollande himself is paid to run the whole country, according to a French news source.

By the end of President Francois Hollande’s first term his barber will earn nearly $660,000.

French newspaper Canard Enchaîné published the hairdresser's contract, in which he is referred to as Oliver B.

The five-year contract would mean by the end of his tenure, Mr B will have pocketed around €600,000.

The contract, pictured below, reads: 'Mr B. commits to maintaining the utmost secrecy, during and after the completion of his contract, on the work he has done and the information he has had access to.'

The French newspaper claim the hairdresser is a regular travel companion to the president and Mr B's lawyer Sarah Levy told a French news source the bumper salary was to reflect her client's workload.

'He is available to the president around the clock, 24 hours a day, and is never replaced by anyone else. He missed the birth of his own children, their broken arms, their operations,' she said.
Mr B coiffures Francois Hollande's hair every morning, and also does the president's hair before public appearances.

The story has prompted French citizens to poke fun at their head of state by offering up hair loss suggestions ranging from a garish mullet to a Donald Trump-inspired make-over. 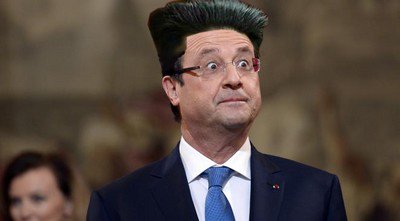 Burkini ban: Corsica mayor prohibits Islamic swimsuit after beach brawl on French island
A mayor on the French island of Corsica has become the third nationwide to announce a ban on burkinis, following weekend clashes allegedly sparked by a row over the full-body Islamic swimsuit.

Michel Lee Shim vs. Paul Foo Kune
The main protagonists behind the pipe case or in the judicial scandal that erupted during the week: Lee Shim and Paul Foo Kune. Both countries are expected early this week. They should discuss this case of alleged corruption with the CCID.

Higher Education: Five Universities Not Allowed To Operate In Mauritius According To UGC
The University Grants Commission (UGC) offers a replica of size five Indian universities affiliate operating in Mauritius. These are EIILM, JSS Academy, the Arya Sabha, Global Business and Mauras. "These universities can not run races in Mauritius," says the UGC.

N.S.A. Said to Tap Google and Yahoo Abroad
The National Security Agency and its British counterpart have apparently tapped the fiber-optic cables connecting Google’s and Yahoo’s overseas servers and are copying vast amounts of email and other information, according to accounts of documents leaked by the former agency contractor Edward J. Snowden.
Tags:
Francescandal