Hawaiimarsnasascience
A team of six people have completed a Mars simulation in Hawaii, where they lived in near isolation for a year.

Since 29 August 2015, the group lived in close quarters in a dome, without fresh air, fresh food or privacy.

Experts estimate that a human mission to the Red Planet could take between one and three years.

The Nasa-funded study run by the University of Hawaii is the longest of its kind since a Russian mission that lasted 520 days.

Having survived their year in isolation, the crew members said they were confident a mission to Mars could succeed.

"I can give you my personal impression which is that a mission to Mars in the close future is realistic," Cyprien Verseux, a crew member from France, told journalists. "I think the technological and psychological obstacles can be overcome." 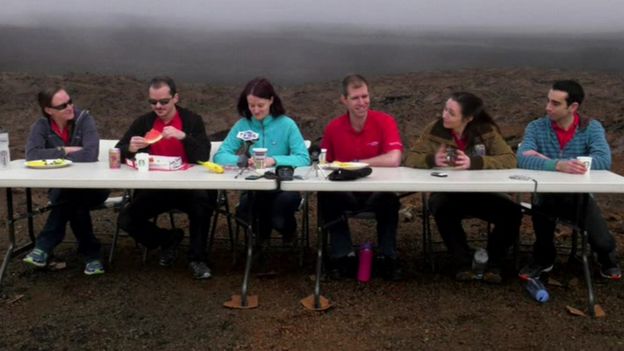 But mission commander Carmel Johnston said the lack of privacy over the past year had been difficult.

"It is kind of like having roommates that just are always there and you can never escape them so I'm sure some people can imagine what that is like and if you can't then just imagine never being able to get away from anybody," she said.

Tristan Bassingthwaighte, a doctor of architecture at the University of Hawaii, praised research done into the human element of space travel.

"The research going on up here is just super vital when it comes to picking crews, figuring out how people are going to actually work on different kinds of missions, and sort of the human factors element of space travel, colonisation, whatever it is you are actually looking at," he said.

The team consisted of a French astro-biologist, a German physicist and four Americans - a pilot, an architect, a journalist and a soil scientist.

The experiment dealt with the human element of exploration.

Whilst conducting research, the six had to live with limited resources, wear a space-suit when outside the dome, and work to avoid personal conflicts. 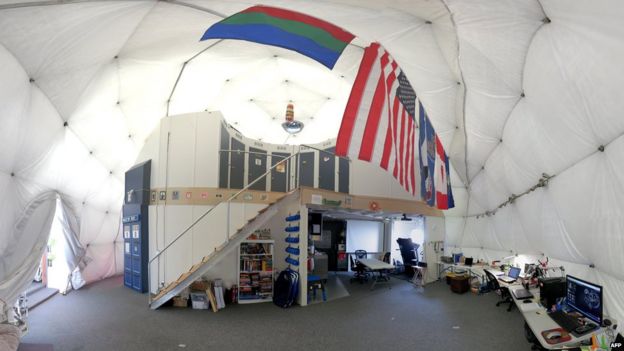 They each had a small sleeping cot and a desk inside their rooms. Provisions included powdered cheese and canned tuna.

NASA has discovered seven planets with Earth-like qualities orbiting a nearby star making them among the strongest candidates in the continued search for extraterrestrial life among known exoplanets, or planets that exist outside of our own solar system.

NASA says it has received a signal from 540 million miles across the solar system, confirming its Juno spacecraft has successfully started orbiting Jupiter, the largest planet in our solar system.

NASA has confirmed the existence of flowing liquid salty water on Mars, fueling the possibility of life on the Red Planet.

SpaceX's Failed Mission: What We Know

SpaceX's latest attempt to bring supplies to the International Space Station failed after its vessel, Dragon, exploded shortly after it launched in Florida Sunday morning.

Landing on a Comet, a Mission Aims to Unlock the Mysteries of Earth

In a technological feat that gives scientists their first opportunity to dig into a remnant of the early solar system, the European Space Agency’s Rosetta mission successfully placed a small spacecraft on the surface of a speeding comet on Wednesday.

An unmanned Antares rocket exploded seconds after liftoff from a commercial launch pad on Virginia's eastern seaboard on Tuesday, marking the first accident since NASA turned to private operators to deliver cargo to the International Space Station.