galaxygalaxy noterecallssamsung
Nearly two weeks after Samsung recalled the Galaxy Note 7 due to the risk of explosion, the device is still being used just as frequently by its owners.

This is according to data from Apteligent, a mobile analytics company that claims "usage rate of the phone among existing users has been almost the exact same since the day of the recall."

It seems not even exploding batteries can tear users away from their smartphones, but the apparent reticence of users to get rid of their faulty devices is not being helped by Samsung's mismanagement of the recall process. Swapping 2.5 million smartphones is certainly no easy task, but the South Korean firm has not helped the situation by issuing confusing information to consumers. The longer the situation goes on, the more damage it does to the company's brand.

Looking through Samsung's statements on the issues over the past fortnight, it's easy to see why consumers might be unsure of the best course of action. The initial recall on September 2nd said the company would "voluntarily replace [users'] current device with a new one over the coming weeks," but didn't mention whether it was safe to continue using the device. A week later owners were advised not only to exchange their device "now," but to also power it off completely. 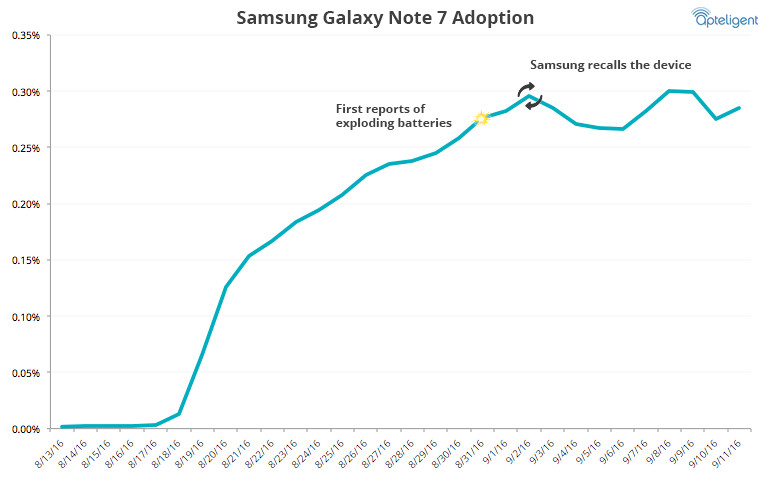 In the same release Samsung said that exchanging a faulty Note 7 for a new device would only happen "pending [...] approval" from the Consumer Product Safety Commission (CPSC), but did not give a timeline for this approval process or what the delay might be. The company also said that owners could exchange their Note 7 for an (unaffected) Galaxy S7 or S7 Edge and receive "a refund of the price difference." Alternately, they could talk to "select carriers and retail outlets" (which were not listed in the release) to get a replacement device or a loaner smartphone.

The Wall Street Journal reports that Samsung was also late in coordinating with the CPSC about the problem, with the federal agency only issuing advice to consumers to stop using the Note 7 a week after the September 2nd statement. The CPSC has also yet to issue an official recall, with the delay reportedly caused by confusion over the exact nature of the fault and how it can be dealt with. In South Korea, for example, Samsung has published a software update that will limit the Note 7's battery to 60 percent charge, but this band-aid has yet to be made available in other countries.

The lack of coordination with the CPSC is also affecting carriers' ability to help with the recall. The WSJ reports that while Samsung has sent an unknown number of Note 7 units to mobile operators, they aren't allowed to distribute them until they receive approval from the CPSC. Samsung, meanwhile, is saying it still needs more time to fully analyze the fault.

Looking at this confusion, it's no surprise that many Note 7 owners are simply sticking with their devices and accepting the risk of explosion, fire, or worse. The prospect of wasting time setting up a new device or being given a much slower smartphone as a temporary exchange won't help either. Ultimately, it's to the benefit of tech companies that smartphones have become such an essential part of everyday life, but it also means it's vital for them to take responsibility when things go wrong. Samsung, so far, has failed to do so.

Text by The Verge

Samsung Electronics Co Ltd on Friday said it expected to take a hit to its operating profit of about US$3 billion over the next two quarters due to the discontinuation of its fire-prone Galaxy Note 7 smartphone.

Samsung to Note 7 owners: Here's an extra $100 for your phone

The Consumer Product Safety Commission issues an official recall notice, and Samsung throws in a $100 credit to encourage people to turn in their phones.

As the Note 7 dies will Google inherit the Android kingdom?

Samsung just officially ended the Note 7, barely two months after it launched. The full implications for Samsung are yet to be seen, but it's undeniably a huge blow to its mobile reputation.

The Galaxy Note 7 is dead

Samsung has announced it's ending production of the Galaxy Note 7 around the world, pulling the plug on the phone after a months-long controversy over its defective, dangerous batteries.

Samsung Electronics Co Ltd suspended production of its flagship Galaxy Note 7 smartphones, a source said on Monday, after reports of fires in replacement devices added to the tech giant's worst ever recall crisis.