Brexit: UK sets out plans to replace all EU laws

brexituk
Thousands of EU laws on everything from workers' rights to the environment are to be transferred into UK law as the country gears up for Brexit.

It would also end the jurisdiction of the European Court of Justice.

But Labour warned it was being done without proper Parliamentary scrutiny.

It comes a day after Prime Minister Theresa May triggered Article 50, starting the process which will officially take Britain out of the EU in March 2019.

In a statement to MPs, David Davis said the repeal bill would allow businesses to continue operating on the day after UK leaves the EU "knowing the rules have not changed overnight".

He said it would also mean that workers' rights, environmental protection and consumer rights currently enshrined in EU laws would continue as UK laws - although Parliament would be free to change them later.

The repeal bill will also "end the supremacy" of EU law in the UK, "delivering" on the result of last year's referendum, he added.

"Our laws will then be made in London, Edinburgh, Cardiff and Belfast and interpreted not by judges in Luxembourg but by judges across the United Kingdom," he told MPs.

Mr Davis said the repeal bill would not give the European Court of Justice a "future role" in the interpretation of UK laws, and UK courts will not be obliged to consider cases decided by the ECJ after Brexit.

But UK courts will be allowed to refer to ECJ case law "as it exists on the day we leave the EU" and it would have the same status as Supreme Court decisions, which can be overturned by subsequent rulings.

Mr Davis addressed concerns about the UK government's plans to change up to 1,000 of what had been EU laws without debating them in Parliament - dubbed "Henry VIII" powers by critics.

Any laws changed in this way would be time limited, he said, and any problems "we have missed will be put right", he told MPs.

Labour campaigned for Remain in last year's referendum but has said it respects the Brexit vote and says it will get behind the government if it protects workers' rights and ensures access to the EU free market in exit talks.

Lib Dem chief whip Tom Brake said: "If needed, we will grind the government's agenda to a standstill, unless proper and rigorous safeguards are given over the Great Repeal Bill. The ball is now in the prime minister's court."

The SNP's Europe spokesman Stephen Gethins said: "It strikes me that the government has pushed the big red button marked Brexit with their fingers crossed and very little idea of what comes next."

The government's white paper is entitled The Great Repeal Bill but it will be given a less dramatic name when it comes before Parliament because UK legislation must be described in a factual manner and anything that sounds like a slogan is banned.

Mr Davis earlier hit back at claims the UK was trying to "blackmail" the EU by raising security issues ahead of Brexit talks.

In her letter on Wednesday triggering Article 50 of the Lisbon Treaty, Theresa May suggested cooperation with the EU on the fight against crime and terror was at risk if Britain did not agree an overall Brexit deal within the two year time limit.

The prime minister's words sparked an angry reaction from some EU officials who said security was too important to be used as a bargaining chip in trade negotiations.

But Mr Davis told BBC Radio 4's Today programme "this is not a threat".

"This is a statement of the fact that this will be harmful for both of us... if we don't get a deal. It's an argument for having a deal."

He added: "We're after a fully comprehensive deal that covers trade, covers security, covers all the aspects of our existing relationship and tries to preserve as much of the benefits for everybody as we can."

Mr Davis, who will be Britain's chief negotiator in Brussels, said the rights of British expats would the first priority in Brexit talks.

The UK also wanted "to deal with the Northern Ireland border situation early as well", he added.

He said the "fear" that the EU would punish Britain for leaving, in order to deter other countries from going down the same route, "has reduced" although it had not disappeared altogether.

But he admitted that Britain was in dispute with EU officials over its demand for parallel talks on the terms of Britain's exit and a deal on trade.

The EU wants to sort out an exit deal - including how much the UK might have to pay to cover its "existing obligations" - before turning to a future trade arrangement but Mr Davis said Britain wanted to "look at the whole package together".

Over the past 44 years, thousands of rules and directives have been incorporated into British law from Brussels.

The prime minister has vowed to "consult fully on which powers should reside in Westminster and which should be devolved to Scotland, Wales and Northern Ireland".

She has said that the process will lead to a "significant increase in the decision-making power of each devolved administration".

The Scottish Parliament will get its own vote on the repeal bill and the UK government is working on the basis that it will need the consent of MSPs to get it through. 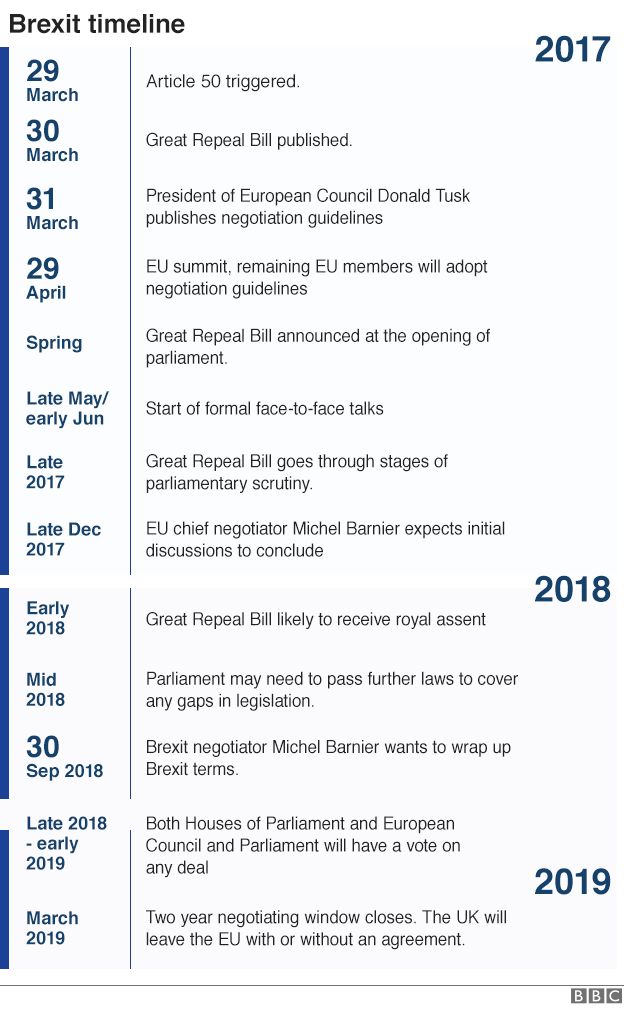 Theresa May has insisted the jurisdiction of the European Court of Justice in the UK will come to an end with Brexit.

Europe's most senior official has criticised the UK's offer to EU nationals after Brexit, claiming it could "worsen the situation" for them.

The UK has woken up to a surprise election result, after Prime Minister Theresa May's election gamble backfired.

The European Union warned Britain on Wednesday that pulling out of the bloc will be a painful -- and costly -- process with real consequences.

Theresa May to seek general election on 8 June

UK Prime Minister Theresa May has announced plans to call a snap general election on 8 June.

Theresa May has said the UK "cannot possibly" remain within the European single market, as staying in it would mean "not leaving the EU at all".