AirlinesscandalUnited AirlinesUS
Another day, another public relations disaster for United Airlines. America's third biggest carrier is being slammed online for violently dragging a passenger - a 69-year-old Asian man, believed to be a doctor - off an overbooked flight.

United Airlines Passenger Is Dragged From an Overbooked Flight

The disturbing scene captured on cellphone videos by United Airlines passengers on Sunday went beyond the typical nightmares of travelers on an overbooked flight.

An unidentified man who refused to be bumped from a plane screamed as a security officer wrestled him out of his seat and dragged him down the aisle by his arms. His glasses slid down his face, and his shirt rose above his midriff as uniformed officers followed.

This comes just weeks after the company, whose slogan is "Fly the Friendly Skies", was ridiculed for refusing to allow two teenage girls to board a flight because they were wearing leggings.

Chief executive Oscar Munoz added more fuel to the fire with his response, which didn't mention the use of force. "This is an upsetting event to all of us here at United. I apologize for having to re-accommodate these customers," he said in a statement.

But Mr Munoz also sent an email to employees calling the passenger, who was pictured with a bloodied face, "disruptive and belligerent". 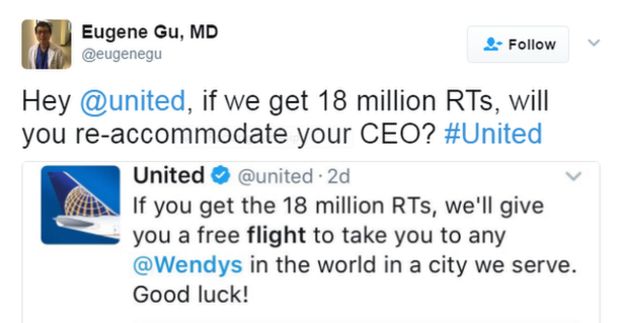 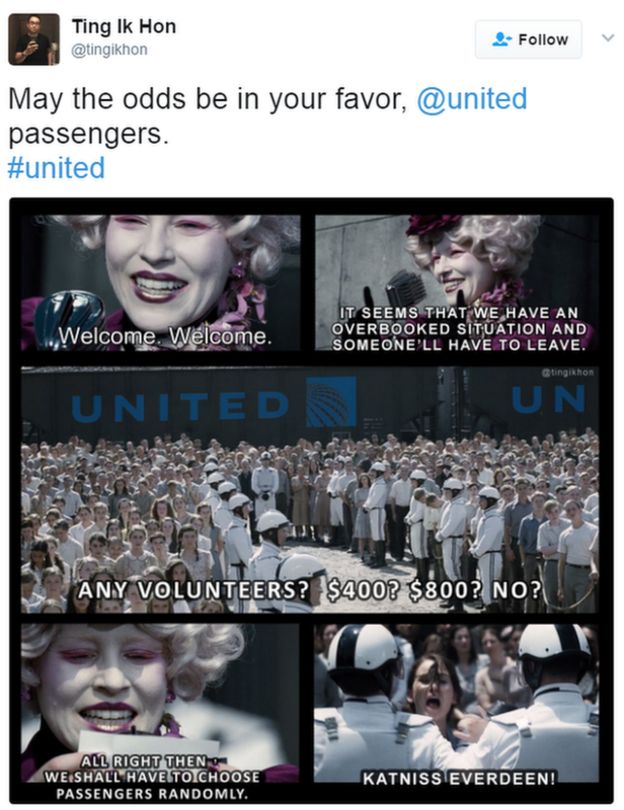 Delta Airlines has cancelled thousands of flights since Wednesday because of severe weather. It's not the first time.

Delta chief executive Ed Bastian was forced to apologise after thousands of flights were delayed and cancelled due to a computer bug and power failure last August.

In February, Sikh-American actor Waris Ahluwalia was barred from boarding an Aeromexico flight because he refused to remove his turban during a security check. The airline later apologised.

And Southwest Airlines flew into a PR storm in 2010 after US filmmaker Kevin Smith was kicked off a flight after being told he was too big to fly. He ended his boycott of the airline six years later.

So how could United have handled the situation better?

John Bailey is a specialist in crisis communications and has handled public relations for many of the aviation industry's biggest players, including Malaysia Airlines following the disappearance of MH370.

"Any airline which allows its employees the discretion to take this kind of heavy-handed action against a paying customer is asking for trouble," he says.

"Every other passenger on that aircraft was a potential citizen journalist. What's astonishing is that United responded so poorly to an absolutely predictable reputational risk.

"But businesses generally are struggling to adapt to the new communications landscape. Research suggests that it takes companies an average of 21 hours to issue meaningful external communications in a crisis situation, leaving them open to 'trial by Twitter'." 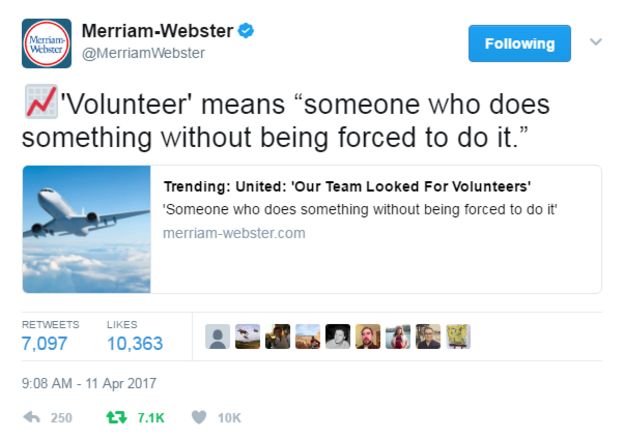 Wes Finley, a US marketer working at Facebook, said the United video went viral so quickly because "everyone could relate to the frustration the doctor felt at being involuntarily booted".

"Last week's widespread cancellations by Delta also left a lot of people with a hostile attitude to airline travel," he adds.

"From the brutality of the man's removal, to the CEO's response, which contradicted itself and was essentially a non-apology - it's truly difficult to see what United Airlines' communications strategy is hoping to achieve, or whether they have one at all.

"It is also a reminder for brands that issuing a timely statement that acknowledges the error and shows remorse, while staying consistent both internally and externally is essential.

"Assuming that an internal letter to employees in a company as large as United Airlines will stay private was a big mistake. Their casual disregard for their customers does seem to stress an opportunity for other brands to step into the market."

Ironically, United's CEO Oscar Munoz, who took over in September, was named PR communicator of the year by a trade publication last month. PR Week called him "a smart, dedicated, and excellent leader who understands the value of communications".

The award was made before the overbooking and leggings incidents. One would assume he is unlikely to win any more such accolades anytime soon.

United's Facebook page apology has drawn thousands of angry comments, including calls for the passenger to sue.

US authorities are also looking into the matter, with the Department of Transportation saying it "remains committed to protecting the rights of consumers".

But will all the online outrage about United's behaviour and response, which has led to a hashtag of #boycottUnited, actually damage the airline's bottom line? 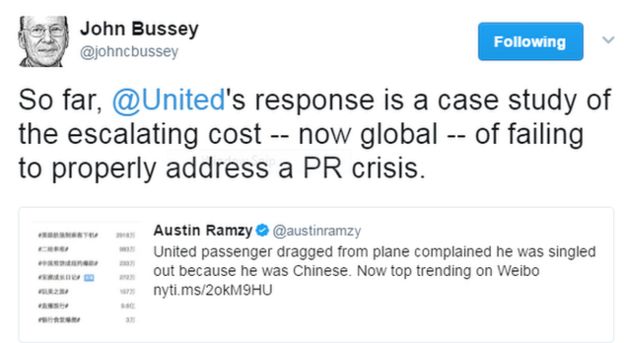 Well, its reputation has undeniably taken a severe blow. The story has gone viral around the world, including on Chinese social media site Weibo.

But pundits say it is hard to put a monetary value on reputational damage. Look at Samsung, for example. The tech giant has just reported a stellar profit forecastdespite facing corruption allegations and the embarrassment of exploding phones.

Aviation analysts also believe demand for its flights are likely to be unaffected by the incident.

United Airlines Reaches Settlement With Passenger Who Was Dragged Off Plane

David Dao, the doctor who was seen being dragged off a United Airlines jet this month in videos that sparked widespread outrage, has reached a settlement with the airline for an undisclosed amount, his lawyers said on Thursday.

Trump recorded having extremely lewd conversation about women in 2005

Donald Trump bragged in vulgar terms about kissing, groping and trying to have sex with women during a 2005 conversation caught on a hot microphone, saying that “when you’re a star, they let you do it,” according to a video obtained by The Washington Post.

US Olympic swimmers in Rio de Janeiro invented a story about a robbery in an effort to disguise a dispute over a damaged petrol station door, police sources have told the BBC.

The 10 Most Important Excerpts From the CIA Torture Report

A 4chan user claims to have released nude photos of several female celebrities in a major hacking.

Los Angeles Mayor Eric Garcetti said he will continue to press Clippers owner Donald Sterling to give up his ownership of the NBA team, but said it may take a "protracted fight" before the 80-year-old billionaire agrees to sell.