Novichok attack: Russia 'has no reason' to investigate suspects

The Kremlin has said Russia is not investigating the two men that Britain has named as suspects in the nerve agent attack on a former Russian spy.

Britain announced charges in absentia against two alleged Russian agents on Wednesday, and Theresa May has accused the Russian government of orchestrating the March attack on Sergei Skripal and his daughter Yulia in Salisbury.

Dmitry Peskov, Vladimir Putin’s spokesman, said on Thursday that the prime minister’s accusations were “unacceptable” and that “no one in the Russian leadership” has anything to do with the poisoning.

Peskov said Russia “has no reasons” to investigate the two individuals – Alexander Petrov and Ruslan Boshirov – because Britain had not asked for legal assistance with the case.

“Neither the highest level of Russia’s leadership, nor lower ranks, nor any official representatives had or have anything to do with the events in Salisbury,” said Peskov. “Even the suggestion that they did so is unacceptable. Russia was not involved.”

May told the House of Commons on Wednesday that the attempted murder of Skripal, a former Russian military intelligence officer, and his daughterwas probably approved at the highest levels of the Russian government. Ben Wallace, the British security minister, said on Thursday that Putin was “ultimately responsible”.

Peskov said Russia had not received any official request from Britain for assistance in identifying the two suspected Russian GRU military intelligence officers that Scotland Yard believes carried out the attack – the first use of chemical weapons in Europe since the end of the second world war. “For us to be able to do something in this direction, we need to receive a request,” Peskov said. “This is usual international practice.”

Earlier Russia said its request for the British embassy in Moscow to provide the fingerprint records of the two men had been met with “an unconditional refusal”.

Moscow said Laurie Bristow, the British ambassador to Russia, was summoned to the foreign ministry shortly after May’s statement.

Maria Zakharova, the Russian foreign ministry spokeswoman, told state television that Russian nationals would have had to provide fingerprints to receive a British visa.

She called the British refusal to allow Russia to study the alleged GRU officers’ fingerprints records “a gross rudeness”. The UK had refused to share evidence through official channels, she said, and had staged an “absurd and funny provocation”.

Zakharova claimed Moscow was still open to cooperating with London in the investigation into the attack in Salisbury. The British embassy said it would not comment at this point on what was a private discussion at the foreign ministry.

She described British accusations that Russia was behind the poisoning as “a hellish carousel that has no end or beginning”. She accused British authorities of doctoring CCTV images that the Metropolitan police say show the two suspectsarriving on Friday 2 March at Gatwick airport. Police say the two men used aliases to travel to Britain. 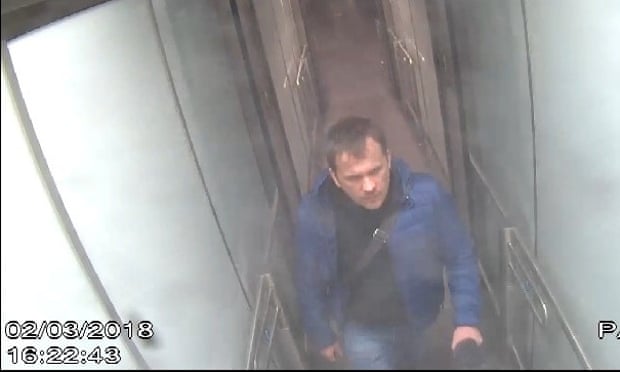 “The same place, the same corridor, and the timestamp on the footage is identical to the second,” Zakharova said. “Accordingly, either the date and the exact time were overlaid on the image, or these are GRU agents who have learned to walk synchronously while appearing separately in two different photos. You know, this is god-level trolling.” 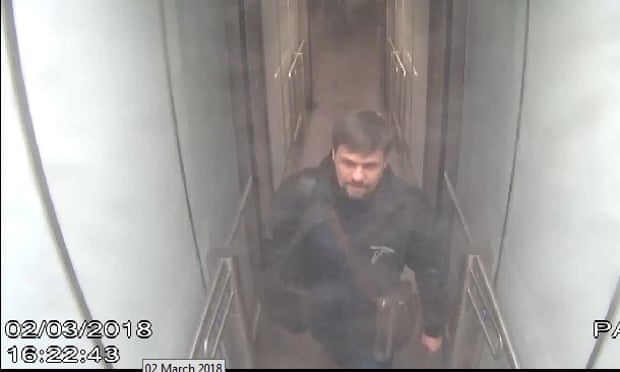 On Thursday Scotland Yard said the images of the two suspects at Gatwick were taken from two different cameras covering separate lanes. The photos were recorded at the point passengers exit from international arrivals, a spokesperson said. Gatwick airport has several, nearly identical gate corridors that people arriving in Britain must pass through. The Scotland Yard response was also cited by Russia’s state-controlled RIA Novosti news agency.

Leonid Slutsky, the head of the Russian parliament’s international relations committee, lashed out at May’s allegations that Moscow had dispatched would-be assassins to Salisbury.

“Britain is continuing a large-scale anti-Russian provocation,” he said. “This is absolute nonsense. Once again there is no real evidence of Russia’s involvement, only ungrounded accusations.”

On Wednesday, Estonia said it had detained two of its nationals on suspicion of spying for Russia. One worked at the country’s defence forces’ headquarters. The men are suspected of passing Estonian and foreign classified information to GRU officers.

The Russian currency hit a historical low Wednesday as it went through 80 to the U.S dollar for the first time since the 1998 currency crisis. The ruble’s extended slide has occurred in sync with the decline in the price of oil, Russia’s chief export, reducing the Kremlin’s spending power and causing problems for President Vladimir Putin.