Congoplane crash
At least 27 people were killed, including some on the ground, when a small plane crashed into a densely populated neighborhood in the city of Goma in eastern Democratic Republic of Congo on Sunday, a rescue official said.

The propeller plane, which was operated by local company Busy Bee, crashed shortly after take-off en route to the city of Beni, about 250 km (155 miles) to the north, officials said.

The company said the 19-seater Dornier 228-200 had 16 passengers and two crew members on board.

There was no word yet on what might have caused the accident.

Joseph Makundi, the coordinator of rescue services in Goma, told Reuters that 27 bodies had been recovered from the rubble, including those of several people hit by falling debris.

“I was at a restaurant with my family when I saw the plane spinning three times in the air and emitting a lot of smoke,” said Djemo Medar, an eyewitness in Goma’s Mapendo neighborhood. “After that we saw the plane crash into this house,” he said pointing to a nearby building.

“We know the pilot. His name is Didier. He was shouting, ‘Help me, Help me.’ But we had no way to get to him because the fire was so powerful,” Medar said.

At the crash site, residents threw water from buckets and cooking pots onto the smoldering wreckage. The rear section of the plane rested sideways, propped up by a wall, videos posted on social media showed.

Police arrested one man for stealing cash from the rubble and fired warning shots to disperse people who had started looting, he said.

Air accidents are relatively frequent in Congo because of lax safety standards and poor maintenance. All Congolese commercial carriers, including Busy Bee, are banned from operating in the European Union.

A cargo plane departing from the same airport and carrying staff members of President Felix Tshisekedi crashed an hour after take-off last month, killing all eight people on board.. 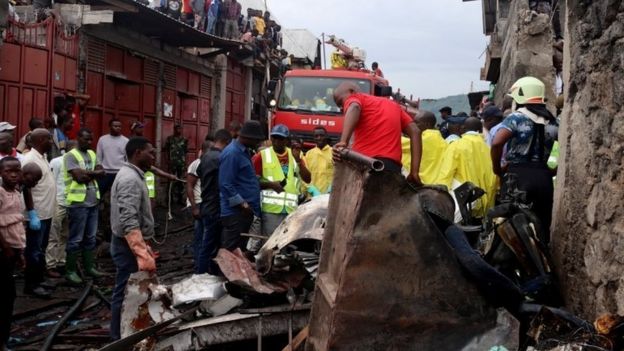 A former vice president of the Democratic Republic of Congo, Jean-Pierre Bemba, was sentenced on Tuesday to 18 years in prison for crimes against humanity and war crimes committed by militiamen under his command during a four-month rampage of looting, rape and murder in the Central African Republic.

Voters in Congo Republic have overwhemingly backed a change in the constitution that will allow President Denis Sassou Nguesso to run for a third consecutive term, the results of a referendum showed on Tuesday.

The Democratic Republic of Congo is reporting new Ebola cases in a northern town, sparking fears that the deadly virus is expanding far beyond West Africa.

Economic Zone: An Agreement Signed Between Mauritius and Congo

Establish special economic zones in the Congo. This is the objective of Mauritius and the Congolese government. It is in this context that the Board of Investment (BOI) and the Ministry for the Presidency of the Republic for Special Economic Zones of the Republic of Congo have signed on Thursday a memorandum of understanding at the hotel Labourdonnais in Port Louis.

The current battle in the eastern Democratic Republic of Congo have been 130 deaths in 24 hours, said Monday the Kinshasa government, the United Nations called ready to use "military force" to halt a rebel advance.