A hundred extras found in preview the passenger terminal of the new terminal Sir Seewoosagur Ramgoolam, Tuesday, July 30. They participated in a series of tests before the scheduled opening in early September.

The new terminal at Sir Seewoosagur Ramgoolam, up to 4.5 million visitors per year, received its first passengers, Tuesday, July 30, through a series of operational tests conducted by Airport Terminal Operations Limited (ATOL). One hundred students, faculty and cadresde the Sir Gaetan Duval Hotel School lent themselves to the game. 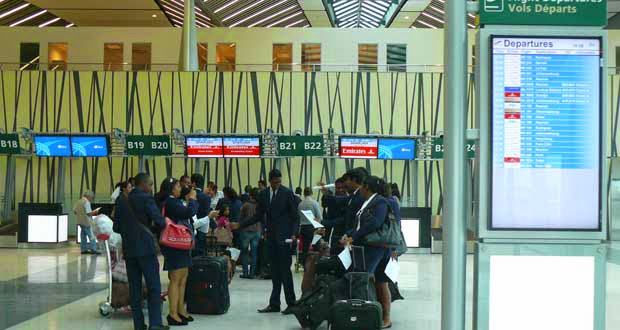 They participated in a step by step simulation starting on Reunion, South Africa, Dubai and London, taking fast benchmarks, despite the vastness of the concourse.

"The terminal is very modern and everything is very well signposted. There is no risk of losing, "said Henriot trouvéJonathan one of the" first passengers. " "Students have told me that they feel comfortable and are impressed by the architecture of the terminal," says Deva Thancanamootoo, Deputy CEO of ATOL.

The new terminal, include 52 check-in counters at the beginning, eight ports of embarkation and six carousels arrival to ensure greater flow of luggage. Further tests are planned in the coming days with the participation of airlines.