asiaBusinessratingstechnology
Businesses are being tested throughout the region.

Three years of slowing growth, gyrating currencies and stock prices, and stagnation in the export markets of the U.S. and Europe all present challenges. Companies that are not only surviving but also shining in these times make up our ninth annual roster of Asia-Pacific’s best 50 big listed companies.

Some 20 Chinese companies make the list, down slightly from 23 last year. The mainland’s real estate sector is suffering, but the three property developers from last year’s Fab 50–China Vanke , Longfor Properties and Poly Real Estate Group–managed to find new markets and put together another winning year.
India produced 12 entries, up from 11 last year. We take a closer look at 2 of these–Asian Paints , here and Tata Consultancy Services , here. Three Indian drug companies grace this year’s list–Sun Pharmaceutical Industries and Dr. Reddy’s, which are returnees, and Lupin, a newcomer–showing the country’s pharma clout. One Indian company, HDFC Bank, has now made the list seven times, more than any other Fab 50 company this year.
Hong Kong put four companies on the list, the next highest number, and all four are newcomers: Wharf (Holdings), which started in 1886, and three casino companies–SJM Holdings , Galaxy Entertainment and Melco Crown Entertainment demonstrating the impact of Macau’s booming gambling industry.
Eighteen companies are debuting, including three from the Philippines–Alliance Global Group, Ayala and Jollibee Foods. Every country is represented except Japan, which also failed to boast a Fab 50 company in 2011. Two long-running Fab 50 companies didn’t answer the bell this year: Hong Kong’s Li & Fung and Noble Group had made the list seven times.
Click here for the full list of Asia’s Fab 50 Companies
In terms of industry, technology companies once again dominated our list this year with nine representatives, down from 11 firms last year.  The consumer durables industry has the second most representatives with seven companies followed by real estate with five members.  An oil and company firm made the list for the first time since 2009.
Our Billionaires list is littered with executives and founders of these Asia Fab 50 companies, including Peter Woo, Zhang Shiping and Tsai Eng-Meng. A few of the billionaires are the wealthiest people in their respective countries. See our recently released 2013 Philippines Rich List to find the Philippines’ 50 wealthiest people. Andrew Tan (Alliance Global), doubled his wealth to $4.6 billion and is the third-richest person on the list. Jaime Zobel de Ayala, the sixth richest ($3.1 billion), is Chairman emeritus of Ayala Corp., Philippines’ oldest conglomerate.

How do we pick these companies? We started with 1,220 that had at least $3 billion in annual revenue or market capitalization. We looked at each company’s track record for revenue, profits, return on capital and share-price movements, and then we sized up the outlook. If it had too much debt or the government owned at least half the shares, it was out.

These companies did not make the cut this year, but look out for them next year. 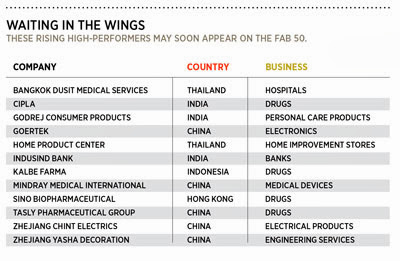 These are high performing Asian arms of Western multinationals.

Mauritius is the only African country among the top 40 economies worldwide for doing business, according to the Forbes ninth annual survey of the Best Countries for Business 2014 released in December 2014.

Cost savings… elasticity…. scalability…. load “bursting”…. storage on demand… These are the advertised benefits of cloud computing, and they certainly help make for a solid business case for using either third-party services or a virtualized data center.

5 Remedies To Protect Yourself Against The Pessimism Bug

According to a recent TIME Magazine poll, the percentage of Americans who identify themselves as “optimists” has plummeted from 79 percent in 2004 to 50 percent today.