Tens of thousands of Indonesians have fled their homes after a volcano erupted in east Java.

Mount Kelud spewed ash and debris over a large area, including the city of Surabaya, about 130km (80 miles) away.

Officials said three people died after their houses collapsed under the weight of ash.

Airports in Surabaya, Yogyakarta and Solo shut down because of low visibility. There are also fears that debris could damage aircraft engines.

Yogyakarta airport manager Andi Wirson said the runway was covered in a 5cm-thick layer of ash.

Officials raised an alert on Thursday about an hour before the volcano erupted.

They urged people living in 36 villages within 10km of the volcano to evacuate.

Officials said two people died when their homes caved in under the weight of gravel and ash.

A 70-year-old man was killed when a wall collapsed while he was waiting to be evacuated.

Some of the evacuees tried to visit their houses on Friday morning to gather their possessions, but were forced to turn back by the stream of volcanic ash and rocks from the volcano.

"The whole place was shaking - it was like we were on a ship in high seas," one resident told AFP new agency.

"We fled and could see lava in the distance flowing into a river."

The volcano spewed ash and gravel that flew as far as 200km away, officials said.

The BBC's Alice Budisatrijo in Jakarta says thick dust in villages close the volcano makes it dangerous for pedestrians and vehicles to be on the road.

Mount Kelud, which had been rumbling for several weeks, erupted on Thursday evening.

Officials said on Friday that the eruption was gradually subsiding.

Experts say the volcano tends to quieten down after a large eruption, and more big eruptions are unlikely.

The volcano last erupted in 1990, killing dozens of people. A powerful eruption in 1919 killed around 5,000 people.

Indonesia lies across a series of geological fault-lines and is prone to frequent earthquakes and volcanic eruptions.

There are about 130 active volcanoes in Indonesia.

Earlier this month, Mount Sinabung on the island of Sumatra erupted, killing at least 14 people. 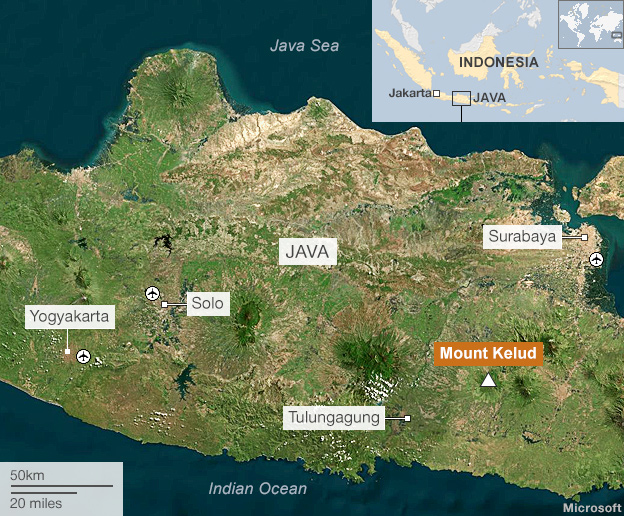 Bali volcano: Residents living in evacuation zone urged to leave now
Bali residents living next to a smoldering volcano are being urged to evacuate as soon as possible, amid warnings from emergency agencies of another larger eruption.

Spying Row: Indonesian President Susilo Bambang Yudhoyono Accuses Tony Abbott of Taking Claims too Lightly
The president of Indonesia has lashed out at Tony Abbott in a series of angry tweets, accusing the Australian Prime Minister of taking the spying scandal too lightly.

Malaysia, Indonesia to Let 'Boat People' Come Ashore Temporarily
Malaysia and Indonesia said on Wednesday they would offer shelter to 7,000 "boat people" adrift at sea in rickety boats but made clear their assistance was temporary and they would take no more.

Japanese Volcano Kills One, Over 30 Seriously Injured
A Japanese volcano popular with hikers erupted on Saturday, killing one woman and seriously injuring more than 30 people, officials and media said.