Oil Slick Hints Malaysian Jet May Have Crashed at Sea

A 12-mile-long oil slick spotted between Malaysia and Vietnam on Saturday afternoon is thought to be the first sign that a missing Malaysia Airlines flight with 239 people aboard went down in the waters between southernmost Vietnam and northern Malaysia, according to Vietnam’s director of civil aviation.

“An AN26 aircraft of the Vietnam Navy has discovered an oil slick about 20 kilometers in the search area, which is suspected of being a crashed Boeing aircraft,” Lai Xuan Thanh, the director of the Civil Aviation Administration of Vietnam said. “We have announced that information to Singapore and Malaysia and we continue the search.”

Mr. Thanh said the oil on the surface of the water was somewhat closer to Vietnam than Malaysia, at the mouth of the shallow Gulf of Thailand. The last coordinates automatically transmitted by the aircraft were from on the Malaysian side near the midpoint between the two countries, when the plane appeared to be in stable flight at 35,000 feet.

Malaysia’s Deputy Minister of Transport, Aziz bin Kaprawi, said authorities had not received any distress signals from the aircraft. a Boeing 777-200 flight that vanished after taking off from Kuala Lumpur early Saturday morning, bound for Beijing, where it was to arrive at 6:30 a.m.

In a development that raised fears of foul play, investigators said they were looking into reports that two men — one Italian, the other Austrian — whose names were identical to those listed on the plane’s passenger manifest, had reported their passports stolen.

The Italian citizen, Luigi Maraldi, told news media in his country that his passport was stolen while he was in Asia, that he is currently in Bangkok and that he is not the Luigi Maraldi listed on the plane’s manifest. The Austrian Foreign Ministry said, according to news accounts, that the one of its citizens, Christian Kozel, 30, reported that his passport was stolen two years ago in Thailand.

A senior American intelligence official said on Saturday that federal law enforcement and intelligence agencies were aware of the reports of the stolen passports and were investigating the matter. But so far, they had no leads.

“At this time, we have not identified this as an act of terrorism,” said the official, who spoke on condition of anonymity because of the ongoing inquiry. “While the stolen passports are interesting, they don’t necessarily say to us that this was a terrorism act. But we will continue to track this very aggressively.”

Malaysia Airlines chief executive officer, Ahmad Jauhari Yahya, told reporters at a briefing late Saturday at Kuala Lumpur International Airport, that the authorities were aware of the reports and were “working with all the embassies.”

“As far as we are concerned right now it’s just a report,” Mr. Yahya said, adding, “We are not ruling out anything.”

The director general of Malaysia’s Department of Civil Aviation, Azharuddin Abdul Rahman, said authorities were reviewing security footage from the airport. “We have relooked at the CCTV, we have relooked at all the recordings pertaining to the baggages of the passengers on board the aircraft. And so far we are satisfied.”

Fredrik Lindahl, the chief executive of Flightradar24, an online aircraft tracking service, said that the missing planehad been equipped with a transponder that regularly transmitted its position, as calculated by GPS. The last recorded position of Malaysia Airlines Flight MH370 was 150 kilometers, or 93 miles, northeast of Kuala Terengganu, a port on the northeast coast of peninsular Malaysia, he wrote in an email. 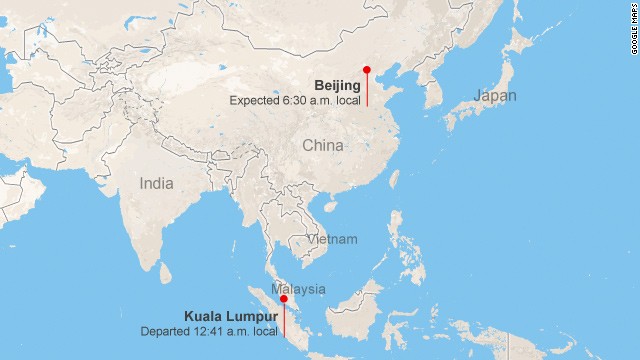 That position is a little less than halfway across the entrance of the Gulf of Thailand from northern Malaysia toward southernmost Vietnam.

Lt. Col. Pham Hong Soi, the head of the propaganda department of the Vietnam Navy for the region near the crash site, said that one rescue vessel had already been ordered to sea and two more had been made ready for departure.

Malaysia’s prime minister, Najib Razak, said in a statement that 15 aircraft and nine ships were searching for the missing plane. Without saying where his government suspected that the plane might have disappeared, he added, “Our priority now is to widen the search area and provide support to relatives of those missing.”

The United States Seventh Fleet said in a Twitter message that it was sending a destroyer, the Pinckney, and a P-3C maritime surveillance aircraft to join the search for the place.

In addition, the Chinese State Oceanic Administration said it had sent a coast guard ship to the area where the plane may have gone down. “It is traveling at full speed to the waters, and is expected to reach there on the afternoon of the 9th,” said a statement on the administration’s website.

Malaysia Airlines said that the plane had 227 passengers aboard, including two infants, and an all-Malaysian crew of 12. The passengers included 154 citizens from China or Taiwan, 38 Malaysians, seven Indonesians, six Australians, five Indians, four French and three Americans, as well as two citizens each from New Zealand, Ukraine and Canada and one each from Russia, Italy, the Netherlands and Austria.

The airline said that it was notifying the next of kin of the passengers and crew that the plane was missing. Hundreds of family members gathered in rooms set aside for them at a Beijing hotel.

Boeing said in a statement that it was assembling a team of technical experts to advise the national authorities investigating the disappearance of the aircraft.

That timeline seemed to suggest that the plane stayed in the air for two hours — long enough to fly not only across the Gulf of Thailand but also far north across Vietnam. But Mr. Lindahl of Flightradar 24 said that the last radar contact had been at 1:19 a.m., less than 40 minutes after the flight began.

And Malaysia’s Deputy Minister of Transport, Aziz bin Kaprawi, said authorities had not received any distress signals from the aircraft.

Arnold Barnett, a longtime Massachusetts Institute of Technology specialist in aviation safety statistics, said that before the disappearance of the plane, Malaysia Airlines had suffered two fatal crashes, in 1977 and 1995. Based on his estimate that Malaysia Airlines operates roughly 120,000 flights a year, he calculated that the airline’s safety record was consistent with other fairly prosperous, middle-income countries but had not yet reached the better safety record of airlines based in the world’s richest countries.

Malaysia, near the Equator, is a popular winter vacation destination for affluent residents of chilly, smoggy Beijing.

The list of Chinese passengers onboard the missing flight included names of artists who attended a meeting in Kuala Lumpur, said the Beijing News newspaper. Other reports said the missing included members of a returning delegation of Buddhists.

If the plane is confirmed to have crashed into the sea, the disaster would add to a difficult week for China and its government. Last Saturday, a group of assailants used knives and daggers to kill 29 people and injure over 140 at a train station in Kunming, a city in southwest China.

China’s growing wealth has brought a steep rise in the number of its citizens traveling overseas, especially throughout Asia, and the government has sometimes faced allegations, especially from Internet users, that officials failed to adequately help victims of emergencies abroad and their families. This time, President Xi Jinping of China and other senior officials swiftly issued statements to show they were closely following developments.

Mr. Xi and China’s prime minister, Li Keqiang, ordered “all-out efforts” to search for the aircraft and prepare to help those who were aboard and their families.

Flight 370 Search: 'It Could Take Months, It Could Take Years'
Many have pointed to lessons learned -- and heeded -- from the disappearance of Malaysia Airlines Flight 370.

Four Flew With False ID Aboard Malaysia Airlines Plane That Vanished Over South China Sea
BEIJING — Emergency teams expanded their search early Sunday for a Malaysia Airlines flight that is presumed to have crashed in the Gulf of Thailand off Vietnam with 239 people aboard, including up to four that the Malaysian government said may have boarded with false documents, according to reports.
Tags:
accidentsAirlinesmalaysiamalaysia airlines