An Australian-led operation on Friday directed five aircraft to a revised area about 1,550 miles from the Western Australian capital of Perth to search for two objects spotted on satellite images. One, at about 79 feet, is larger than a shipping container.

"This is the first tangible breakthrough in what has been an utterly baffling mystery," Australian Prime Minister Tony Abbott said a day earlier. Still, Australian maritime authorities cautioned that their search may also be fruitless and the debris could be unrelated to the missing plane.

On Friday afternoon, maritime authorities said no physical debris had yet been spotted by search aircraft, and officials said they were looking to acquire more satellite imagery to help with the search. They cautioned that multiple searches of the same area may be required.

The area—described by Australia's defense minister as among the most isolated in the world—is regularly battered by high winds, strong currents and changeable weather. Three PC-3 Orion aircraft from Australia and New Zealand, along with a U.S. Poseidon P-8 aircraft, participated in the search Thursday. But it was hampered by thick cloud cover with "poor" visibility, Australian authorities said.

Authorities said weather conditions at the search site were better on Friday, and allowed searchers to conduct visual scans of the area, instead of relying mostly on radar as they had a day earlier.

Aviation experts said that if the debris is found and confirmed to be from the missing plane, authorities will face an even-more daunting task: finding the rest of the wreckage and solving a disappearance that has been one of the biggest mysteries in modern aviation.

"It is going to be a needle in a haystack search," said Admiral Christopher Barrie, a former commander of Australia's military. "These things are not going to be detectable by radar or any other means other than a visual search."

Debris could have drifted over an area of about 39 square miles in the time since the aircraft may have gone down, further complicating the search, said David Griffin, a physical oceanographer specializing in eddies, fronts and currents at Australia's national science agency.

He said that ocean winds in this part of the world will tend to carry debris toward the west or north, while turbulent currents can quickly scatter items. "We don't know what has been found or if this is scattered debris or a single item," Mr. Griffin said. "But certainly items could be going in different directions."

The satellite images were taken on Sunday by DigitalGlobe Inc., a U.S. commercial satellite-imaging company, which passed them along to the Australian military's satellite intelligence office. After evaluating them, the office transferred the images to the Australian Maritime Safety Authority, which set in motion the Indian Ocean search.

"We're using every tool we can," said Andrea Hayward-Maher, spokeswoman for the maritime authority, defending the delay.

On Friday, the five planes were set to resume searching a Minnesota-sized area of the Indian Ocean that is about a 3.5-hour flight from the Australian mainland.

Given the distance, the aircraft are able to remain in flight over the area only for about 2 hours as they fly back and forth over the ocean—like mowing a lawn—with a crew of 13, including six airborne electronics and search officers.

The aircraft are flying at around 1,000 to 2,000 feet, using everything from binoculars to powerful onboard infrared cameras capable of spotting objects up to 22 miles away. They are also equipped with digital radars and Magnetic Anomaly Detector booms extending from the tails, able to home in on large metal objects.

DigitalGlobe, meanwhile, ramped up efforts to scan nearby seas for other potential leads, collecting imagery over a wide area that includes the waters around the debris.

Australian authorities said a second merchant ship was en route to the zone, which will join a Norwegian merchant ship that happened to be nearby and was enlisted in the search. An Australian Navy ship is also headed to the search area and is due to arrive on Saturday, officials said.

The Boeing 777-200 jet carrying 227 passengers and 12 crew vanished abruptly in the early hours of March 8 on a flight from Kuala Lumpur to Beijing, disappearing from civilian radar over the Gulf of Thailand as responsibility was being handed from Malaysian ground control to Vietnam.

Vietnam and Malaysia spent days searching for the aircraft in the Gulf of Thailand as families waited anxiously for word of their loved ones in Beijing and Kuala Lumpur. False leads plagued the searches, with aerial discoveries of what was thought to be a door, a tail section and a life raft all turning out to be debris.

Malaysian officials meanwhile suspected that a blip seen on their military radar over the Strait of Malacca—hundreds of miles from where the airliner had disappeared from civilian radar—might be the plane, and the search was extended to the west of the Malay peninsula and over land.

The areas were ultimately extended to a northern corridor stretching into Central Asia and a southern one extending to the southern Indian Ocean as evidence emerged that the plane flew for four hours after the Malaysians last had sight of it.

"We are in a most isolated part of the world. In fact, it probably doesn't get—if I can be so bold as to say—more isolated," he said. "Let's not build expectations, we're doing our best." 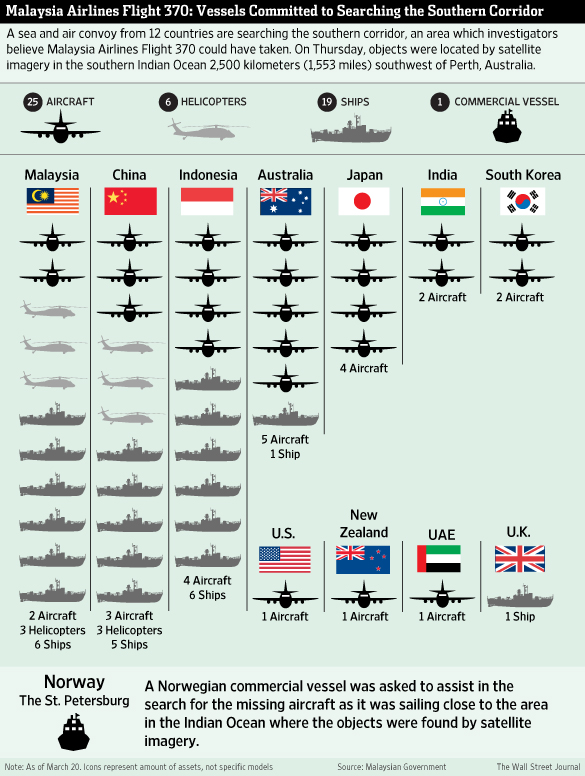 Malaysia Jet Most Likely on Autopilot When It Crashed, Australia Says

Malaysia Airlines (MASM.KL) Flight MH370 was most likely on autopilot when it crashed into the Indian Ocean further south than previously thought, Australian officials said on Thursday, as they charted the next phase of a so far fruitless search.

A ship searching for the missing Malaysian Airlines jet has detected two more underwater signals that may be emanating from the aircraft's black boxes, and the Australian official in charge of the search expressed hope Wednesday that the plane's wreckage will soon be found.

An Australian navy vessel picked up two extended signals from deep underwater in the past 24 hours, in what authorities said was the best lead yet in a monthlong search for missing Malaysia Airlines Flight 370

Search teams were investigating reports of three possible ‘pings’ on Sunday, as a senior Malaysian official claimed Flight MH370 may have been ‘purposely’ steered around Indonesian airspace in order to avoid radar detection as it flew to the southern Indian Ocean

Many have pointed to lessons learned -- and heeded -- from the disappearance of Malaysia Airlines Flight 370.

'Every Little Thing' Under Scrutiny in Malaysia Airlines Probe

Absent any explanation supported by evidence for what may have happened to Malaysia Airlines Flight 370, the inspector general of Malaysian police said Wednesday that authorities were redoubling their efforts -- but he pleaded for patience.