A suspected Russian-made surface-to-air missile downed a Malaysia Airlines jet in a separatist-controlled corner of eastern Ukraine on Thursday, prompting the Ukrainian government to denounce an “act of terror” that killed all 298 people on board.

U.S. intelligence officials confirmed, but could not identify the origins of, the missile strike that led to the deadliest downing of a civilian passenger plane in recent decades. One Ukrainian government official, however, said the Boeing 777 traveling from Amsterdam to Kuala Lumpur appeared to have been hit by an advanced Russian-made missile system that recently came into the hands of the pro-Moscow separatists waging a bloody uprising in the east. 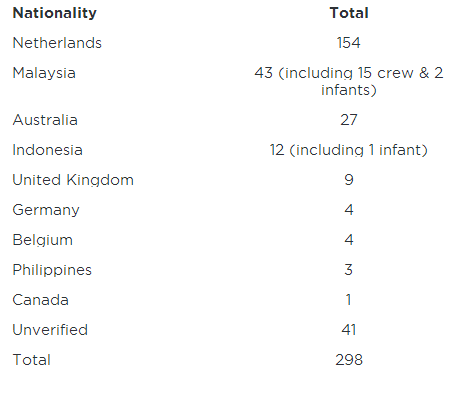 The Ukrainians appeared to point the finger at either Russia or pro-Russian separatists. In a late-night news conference, Valentyn Nalyvaichenko, chief of Ukraine’s Security Service, said his government had obtained intercepts of phone calls between members of Russia’s main intelligence directorate and pro-Russian separatists in which they allegedly discussed shooting down the airplane, according to the Kiev Post.

Images capturing what appeared to be the explosion showed a massive cloud of smoke in the air as the plane was hit about 4:21 p.m. local time. Blurred lines of debris rained down on the ground. Rescue workers plied water over the smoldering remains, which landed in a rural patch of eastern Ukraine where the crash site appeared to be a ghastly scene of twisted metal and bodies splayed out in an ashen tableau.

In Amsterdam, an audible gasp went up at the news conference Thursday night at Schiphol airport when it was announced that 154 Dutch passengers had been on board Malaysia Airlines Flight 17. The airline’s senior vice president, Huib Gorter, read out a list of passenger nationalities that included 27 Australians as the next-largest group. The airplane’s 15 crew members were Malaysian, as were 28 passengers. The nationalities of 41 passengers had not been established at the time.

Australian Foreign Minister Julie Bishop said “a number of passengers” were traveling to the 20th annual International AIDS Conference in Melbourne beginning Sunday, and some of the world’s foremost researchers were thought to have been on the flight. The dramatic loss of yet another Malaysia Airlines flight, after the mysterious disappearance of the same carrier’s Flight 370 in March, sparked a familiar chain of tragedy across the globe, with distraught family members shuttled to impromptu emergency centers in Asia and Europe.

A recording provided by the Ukraine Security Service purportedly captured separatists and Russians conferring about the attack. The Post could not independently verify the authenticity of the recording or the individuals identified in it. One voice on the tape — identified by the Ukrainian intelligence agency as Igor Bezler, one of the leaders in the pro-Russian separatist movement in eastern Ukraine — says a phrase in Russian that can be translated either as “we have just shot down a plane” or “they have just downed the plane.”

The attack — denied by some rebel leaders who insisted they did not have the capabilities to stage such a strike — appeared to propel to a pivotal new phase a crisis that has been brewing for months. Ukrainian authorities, belatedly given permission by the rebels to enter the crash site late Thursday, combed through the wreckage scattered near the city of Grabovo.

“We have managed to identify 30 corpses,” said Konstantin Batozsky, an adviser to Donetsk regional governor Serhiy Taruta. “They are scattered in a range of four kilometers [2.5 miles] around. It’s absolutely horrible.”

“We will collect all the parts from the airplane and move them to a secure place” away from the rebels, Batozsky said. “We should definitely move them.”

Malaysian Prime Minister Najib Razak demanded a full, independent investigation and said the United States had offered its assistance. A number of world leaders called for an international investigation, with Britain proposing a United Nations-led probe.

“This is a tragic day in what has already been a tragic year for Malaysia,” Razak said.

The investigation, however, may be hampered by the whereabouts of the plane’s black boxes. Earlier in the day, the rebels claimed to have found them and were preparing to ship them to Moscow for analysis. In televised comments, Russian President Vladimir Putin put the blame for the Malaysia Airlines crash squarely on Ukraine.

“Certainly the state over whose territory this happened bears responsibility for this terrible tragedy,” Putin said at a meeting with advisers, at which a moment of silence for the victims was televised. “This tragedy would not have happened if there was peace in this land.”

Putin said the Russian government would do everything in its power to get an “objective picture” of what happened.

President Obama said his administration is “working to determine whether there were American citizens on board” the plane.

Obama said U.S. national security officials are in close contact with the Ukrainian government. “The United States will offer any assistance we can to help determine what happened and why,” he said. Vice President Biden called Ukrainian President Petro Poroshenko to extend that offer, the White House said.

Hours later, a U.S. official said U.S. intelligence agencies had confirmed that a surface-to-air missile brought down the plane. The official, who was not authorized to speak on the record about an early intelligence assessment, said government analysts were scrambling to determine who fired the missile.

“This is a contested area,” the official said. “It’s going to take time to get some information on the intentions of whoever was involved.”

The Federal Aviation Administration issued a notice Thursday night prohibiting any U.S. flight operations in the airspace over eastern Ukraine until further notice.

The restriction expands an FAA order issued in April barring U.S. flights from operating over the Crimean region and near the Black Sea “due to the continuing potential for instability.” The April notice did not cover the airspace where the Malaysia Airlines jet was shot down.

In recent months, the rebels have shot down numerous Ukrainian military aircraft using short-range surface-to-air missiles. Experts said such rockets could probably not reach a plane flying at 33,000 feet, as Flight 17 was said to be. But Ukrainian authorities have said the rebels recently obtained Russian-made Buk surface-to-air missiles — a complex system using ground radar to guide a missile to its target and which, experts said, requires expertise and training to operate.

“We are sure that those who are guilty in this tragedy will be held responsible,” Poroshenko said in a statement. A spokesman for Poroshenko later said: “We call it neither an incident, nor a disaster, but a terrorist act.”

European nations have been more reluctant than the United States to impose tougher sanctions on Russia over its role in the Ukrainian crisis. But analysts said the missile attack — if proven to be the act of pro-Russian rebels — could spur European nations to action.

“If it is proven that the rebels did this, Putin will have to find a way to distance himself from them, remove [Russia’s] intelligence services from the ground and find a way to have a cease-fire,” said Robin Niblett, director of the London-based think tank Chatham House.

In response to a question, Gorter, the Malaysia Airlines senior vice president, said that eastern Ukraine was not regarded as a war zone in air-traffic terms. “Had it been, then we would not have been able to fly over it,” he said.

Ukrainian military aircraft — including two over the past two days — have been shot down in eastern Ukraine. Yet commercial aircraft have routinely flown over the conflict zone, although at heights thought sufficient to avoid risk.

Nevertheless, Brian Flynn, a spokesman for Eurocontrol, a regional aviation authority, said Ukrainian aviation authorities had raised the closed airspace zone in the area from 26,000 to 32,000 feet on Monday after military aircraft were shot down.

Flynn said it is up to the Ukrainian government to decide whether and how to restrict airspace, with Eurocontrol responsible for helping to implement those decisions.

Before the crash, 300 commercial aircraft a day were flying through eastern Ukrainian airspace, most on long-haul flights between Europe and Southeast Asia. Flynn said such flights typically cruise at between 33,000 and 37,000 feet.

Flynn said that airlines can elect to avoid an area even if it’s not closed but that he did not think any had chosen to do so in eastern Ukraine. “I’m not aware of any airlines that were specifically avoiding that area,” he said.

The last big civilian plane disaster over Ukrainian airspace was in 2001, when a missile brought down a chartered plane carrying 78 people traveling from Tel Aviv to the Siberian city of Novosibirsk near Ukraine’s border with Georgia. In that incident, the Ukrainian army mistakenly fired the missile at the plane during a military exercise.

Photo of the tragedy

Malaysia Airlines Passenger Plane Crashes in Ukraine
MALAYSIAN Airlines passenger plane with 295 people has crashed in Ukraine today. The Boeing 777 went down near the Russian border according to an aviation industry source.

Malaysia Airlines Jet Crashes in Ukraine
A Malaysia Airlines Boeing 777 en route from Amsterdam to Kuala Lumpur with 295 people aboard crashed Thursday in Ukraine near the Russian border after reportedly being hit by a missile, according to an adviser to Ukraine's interior ministry.

Ukraine Says Russian Officer Pushed the Button to Shoot Down MH17
Vitaly Nayda, Ukraine's director of informational security, told CNN on Tuesday that he is certain a Russian officer personally pushed the button to shoot down Malaysia Airlines Flight 17. Moscow has denied claims that it pulled the trigger.
Tags:
accidentsAirlinesmalaysia airlinesterrorismukraine