africaebolaliberia
As the number of new infections and deaths rise in the Ebola outbreak, fear and suspicion is rising, too, making it more difficult for health care workers to get the sick into hospitals, even as increasingly angry crowds are calling for more government action.

The growing chaos caused by this current Ebola outbreak, which is already the worst on record with more than 1,300 infected and 700 dead in three countries in West Africa, was witnessed by ABC News in Clara Town, a low income community in the Bushrod Island area of Monrovia.

On UN Drive, a car with police in riot gear slowly crossed the Gabriel Tucker bridge to go onto Bushrod Island.

Some minutes later, those officers were standing on a median looking at a group of mostly young men holding homemade signs that read, "Govt please come to our aid in Clara Town"

The men explained that community members had called the Health Ministry to come pick up the body of a man who had been dead in his home since Thursday. Late Friday or early Saturday, a woman had died in the same neighborhood, and she was also still in her home. Both were suspected Ebola deaths, and the protesters were saying that the government should remove them.

A man in the crowd said that since they called the government on Thursday, workers had come to examine the scene, but they had not returned. He said that if the government did not respond to the request of community members to remove the bodies, there would be serious consequences.

"From Monday, the entire Clara Town will be right here. No car will go into town, trust us," he said.

UN Drive is a hub of activity, and it is the main road that leads from many different parts of Bushrod Island into central Monrovia.

Fred D. Weah, a young man who seemed to be a leader of the group, led chants about the youth of Clara Town protecting their neighborhood and not being afraid of the police. The protesters chanted about not wanting any brutality, but said they would return it if it was inflicted upon them.

As the chants got louder and the group got bigger, the riot police crossed the street and asked the protesters to move back from the road and onto the sidewalk. Some of them yelled at the police, but the people moved back onto the sidewalk.

A protester said that he and the others were standing on the road because Liberian President Ellen Johnson Sirleaf had driven that way and they wanted to draw attention to what was happening in Clara Town.

When they heard that an ambulance had arrived in Clara Town, the group moved down UN Drive and turned onto a dirt road. The women in the Clara Town market looked on as protesters and journalists walked down the road towards the neighborhood where the two people had died.

Dozens of people stood on both sides of an ambulance, watching as two health care workers put on protective suits.

They painstakingly checked and rechecked their suits and their disinfecting equipment, and they left the group, spraying the dirt as they walked the narrow path between houses. They passed a small concrete house with a yellow wooden window, and stopped to recheck their gear at a forest green home on the left. A young man said that those were the homes of the dead.

The health care workers joined three men waiting outside of the house and as the men stood back, the workers knocked on the red metal door. Someone opened the door and the workers spoke to the person.

After some time, the people in the house closed the door and the workers turned away.

As the health care workers were walking away, a man in a white shirt with blue stripes told someone on the phone that the health workers could not do anything to make the sick people leave the home, and that of course they would be afraid to attempt to forcibly remove them.

"They said they are afraid, they'll not feed them. That's the rumor coming," said Ezekiel Kumeh, the man in the striped shirt. "People say they're not feeding them, they're not eating, you know? So they say if they go there they will die from hunger."

Many health care workers and aid workers have said one cause for the rapid spread of the Ebola virus is the public's general mistrust of the government. Among the rumors about this disease:

Because of the fear and mistrust about Ebola, well-meaning government and aid workers have said they have been attacked on trips to collect potential Ebola victims from their communities. Though rumors make it difficult and dangerous for aid workers to do their jobs, one of them has even been repeated among health care professionals.

A nurse who wanted to remain nameless said she has heard from other nurses that some staffers avoided an Ebola patient in a local hospital and he starved to death. This would be difficult to confirm, but the rumor that nurses will leave people to die has spread widely.

Back in Clara Town, the health care workers stood near the red metal gate and convinced Kumeh that Ebola patients in the treatment centers receive three meals a day, so he said he would go back and talk to the people in the house, his sister, brother, and a family friend.

He went back to the house and tried to get the people inside to open up.

Nobody opened the door and when Kumeh finally asked if they would be OK and if he should leave, he paused, heard an answer, and then said, "Isaac, I want to hear your voice."

A male voice responded in muffled tones and Kumeh replied, "No, they say they're carrying you all to the hospital."

The person inside the house then said, "No."

With a metal door blocking his way, Kumeh eventually gave up and yelled, "All right, the people are going."

Approximately 20 meters from the house, Kumeh said, "They're in there and for me I can't even go there."

"There's a boundary between they and I so there's nothing I can do," he said. "It's not easy. Lost mother, lost a cousin, and then brother and sister are almost at the point of death and they're refusing to go seek medication. ... We're just going to leave it with God, there's nothing we can do more than this."

He pursed his lips and looked at the ground.

Near the open area in front of the homes that held the dead bodies, a small crowd of people had gathered to find out what was going on. The health workers and Kumeh explained what had happened.

"This is government business," an elderly man said. "If they stay here they will make plenty people sick."

On Tuesday, at the second meeting of the Ebola Task force that was created by President Sirleaf last weekend, people raised concerns about the slow retrieval of bodies of people who may have died from Ebola. On Saturday, it was evident that the collection of bodies is still a problem.

When people saw that the health workers had returned to the ambulance empty-handed, the scene quickly descended into chaos. Medical workers looked on as young men placed tables in front of their truck and told them that they would not allow them to leave.

The crowd had grown, and though most of the people at the scene were quiet onlookers, there was a group of angry young men who all seemed to be insisting that something happen.

"This car will not leave here without carrying anybody," one man said.

The men insisted that the health care workers either take the bodies, or the sick, but they would not be permitted to leave Clara Town empty-handed.

The men who had stood on UN Drive and said they wanted a peaceful protest could do little to stop the angry group from blocking the path of the ambulance.

The health care workers occasionally tried reason with the crowd, and at other times they just sat and looked on, unable to drive away. These government workers were now bearing the brunt of a community's anger at a government they felt wasn't doing enough to protect them from a deadly disease.

On Tuesday, President Sirleaf asked that people avoid gathering in large groups, as that is a way the Ebola virus could potentially spread. But Satuday evening in Clara Town, in response to what they deemed the government's slow removal of bodies, the people did just that.

A man yelled repeatedly at a health care worker, "You're protected more than me."

Later, the same worker tried to talk to another man and told him, "Your patient locked the door, how do you expect us to enter?"

The man replied that he should have called the police.

Later, the worker argued, "There's an iron gate there, you're not expecting us to burst the door."

As the light began to fade in Clara Town, the worker expressed frustration about the fact that this incident was preventing him from doing his job.

"We've got so many cases all over, they're calling us," he said.

This type of situation can have a multiplying effect, as delays such as this one could cause health care workers to miss other appointments and cause other community members to become incensed and react in ways similar to the people of Clara Town.

Amidst the noise, the health worker said he had called the Ministry of Health and that they were sending a vehicle to pick up the two bodies. 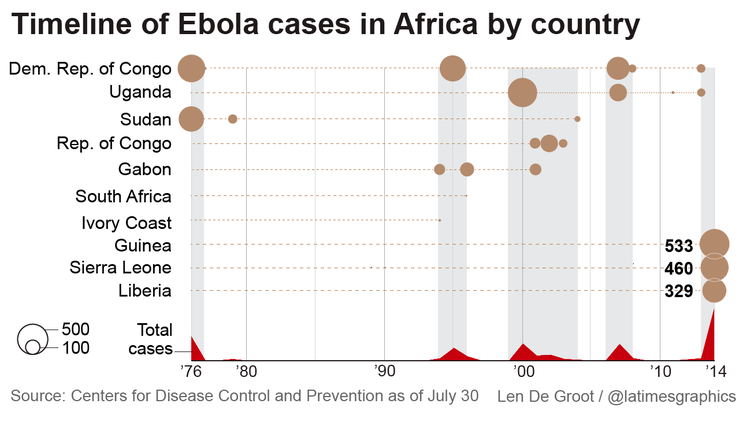 A 33-year-old American working in Liberia as a freelance cameraman for NBC News has been infected with Ebola and will be flown back to the US, the network says.

The epidemic reveals the nation's "persistent and profound institutional weaknesses"

Seventeen suspected Ebola patients are "missing" in Liberia after a health centre in the capital was attacked, the government says.

Liberian officials fear Ebola could soon spread through the capital’s largest slum after residents raided a quarantine center for suspected patients and took items including bloody sheets and mattresses.

The World Health Organization on Thursday swiftly sought to quell fears that international air travel could become a conduit for spreading the deadly Ebola virus from Africa around the globe, emphasizing that such a risk was low.

The deadliest Ebola outbreak in history continues to plague West Africa as leaders scramble to stop the virus from spreading.