Kiev and its Western backers accused Moscow of sending Russian troops and armor to fight alongside rebels in eastern Ukraine, dimming hopes for a diplomatic solution to the crisis and prompting the U.S. and Europe to threaten new sanctions.

Ukrainian President Petro Poroshenko convened an emergency meeting of his security chiefs Thursday and vowed that "Ukraine can defend itself."

He dispatched troops to meet the Russian-backed advance as his government ordered the reinstatement of a draft this fall—though it pledged not to send conscripts into the war zone.

But while officials in Kiev called on Western capitals for support, including military aid, the initial reaction from the U.S. and Europe included expressions of frustration with the Kremlin but no immediate action.

President Barack Obama ruled out a U.S. military response but said that the escalating incursion into Ukraine would bring more costs for Moscow.

"It is not in the cards for us to see a military confrontation between Russia and the United States in this region," he said at a White House news conference.

In an apparent sign of defiance, Russian President Vladimir Putin issued an appeal to the separatists early Friday, hailing their successes on the battlefield and calling on them to open corridors to allow encircled Ukrainian troops to escape. He demanded Kiev end its military operation immediately.

His appeal used the word "Novorossiya," a czarist-era term for lands including much of what is now southern and eastern Ukraine that has been taken up by the separatists. Mr. Putin first used the term publicly in the spring, but he had since dropped it from official statements until Friday.

Mr. Obama didn't detail any new consequences that the Kremlin might face, but the White House said later that he had discussed the situation with German Chancellor Angela Merkel and agreed that it was necessary to consider additional economic sanctions on Russia.

"We want a diplomatic solution; we won't let up in this," Ms. Merkel said earlier in Berlin. "But we must observe that things in recent days have become more difficult and have deteriorated."

The White House also said Mr. Obama would host Mr. Poroshenko in mid-September to show the U.S. commitment to stand with Ukraine.

In Brussels, diplomats said a summit of European leaders set for Saturday could lay the groundwork for widening economic sanctions, but that there doesn't appear to be support for sweeping new measures.

Mr. Obama also said further actions would be discussed at a North Atlantic Treaty Organization summit next week in the U.K.

Russia's latest moves suggested that the sanctions so far weren't enough to serve as a deterrence, despite helping to push its economy into recession. The Russian benchmark Micex equity index fell 2% on the tensions, while the ruble weakened to the lowest level against the dollar in nearly six months.

A senior NATO official said Thursday that more than 1,000 Russian troops were fighting alongside the separatists in eastern Ukraine, by far the largest such force ever reported by the alliance. But he stopped short of calling it an invasion, saying it represented an "incursion" apparently aimed at preventing Kiev's forces from defeating the rebels. This and other evidence shows "a severe escalation in the situation" over the past two weeks, said Brig. Gen. Nico Tak, head of NATO's crisis-management center. NATO planned to hold an emergency meeting on Friday at the request of Ukraine.

At a U.N. Security Council meeting, Russian Ambassador Vitaly Churkin did not deny there were Russians fighting in Ukraine, but said they were volunteers. "No one is hiding that," he said.

Mr. Obama called the moves a continuation what Russia has done for months.

"Russia determined that it had to be a little more overt in what it had already been doing, but it's not really a shift," the president said.

A Ukrainian diplomat at the United Nations, Oleksandr Pavlichenko, urged the West to act urgently. "How many more red lines are to be crossed before this challenge is addressed?" he said.

Earlier in the day, a rebel leader in Ukraine also said for the first time that Russian active-duty military members were fighting in Ukraine, although he said they were in the country for short stints, while on vacation.

"I'll say openly that fighting among us are active military who prefer not to spend a vacation on the beach," Alexander Zakharchenko, prime minister of the self-declared Donetsk Peoples' Republic, said on Russian state television. "They are among us brothers who are fighting for their freedom."

Ukrainian officials said Russian forces had seized the coastal town of Novoazovsk and several villages near the border this week.

"Columns of heavy armor, a large quantity of arms, and troops of Russian regular army units crossed through a part of the border not under control," Mr. Poroshenko said before the meeting with his security chiefs, according to his website. 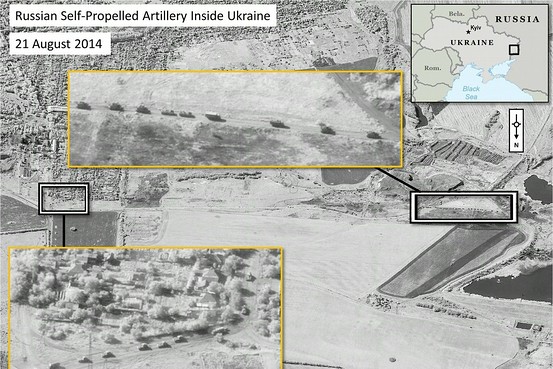 But he called for Ukrainians to remain calm. "The situation is of course extraordinarily difficult…but it is controllable, controllable enough that we must not give in to panic," he said.

Ukraine's National Security and Defense Council approved the reinstatement of conscription and said it would seek the status of a special ally outside NATO from the U.S., although it wasn't clear if Washington or the other members would back that.

Western leaders have for months said a Russian invasion of eastern Ukraine would prompt harsher economic sanctions and international isolation on Russia. But President Obama has also made clear that the U.S. and its allies won't intervene militarily to stop Russian forces.

Kiev's military, underequipped and heavily reliant on poorly trained volunteer units, would be no match for a major force from Russia.

If threats of more Western sanctions failed to deter Moscow, Kiev would likely be forced to agree to a cease-fire that left the separatists—and their sponsors in Russia—in control of a substantial part of Ukraine.

That would be a dramatic setback for Mr. Poroshenko's pro-Western government and a severe blow to Ukraine's already-shrinking economy, as well as a threat to his ambitions for closer ties with the European Union and U.S.

Western nations have grown increasingly alarmed. Speaking before French ambassadors in Paris, President François Hollande said any incursion by Russian troops inside Ukraine would be "intolerable" and warned that Moscow would expose itself to a new round of sanctions if it didn't respect the sovereignty of its western neighbor.

"Russia cannot simultaneously aspire to be a world power in the 21st century and not play by the rules," the French president said.

But it is unclear how big an appetite European countries have for more sanctions on Russia, a major trading partner, with economies on the continent already slowing.

The EU had hoped that diplomatic efforts, which led to a meeting in Minsk, Belarus, on Tuesday between Messrs. Poroshenko and Putin, would lead to a negotiated settlement. But the latest developments made that prospect seem remote.

After falling back before the advance in the southeast, Ukrainian troops are now digging in near the strategically important port city of Mariupol, which had been one of the first Kiev reclaimed from rebels earlier this year. The Russian news agency Interfax cited pro-Russian rebels as saying they will be taking the city "in the coming days."

Ukraine's security council said the assault on Novoazovsk on Wednesday was preceded by missile fire from across the Russian border, followed by the incursion of "two columns of Russian military equipment."

The council said Russian forces had taken control of Novoazovsk and surrounding villages, as well as villages further north, toward Donetsk.

At the main roadblock on the road east from Mariupol, a few dozen pro-Kiev soldiers and volunteers armed with rifles stood at the post of concrete blocks with two armored vehicles. They were digging trenches, but several despaired at what they said was lack of support, with no artillery or tanks to bolster their defensive position.

"What can we do with rifles against tanks?" asked one bearded fighter in his 20s.

Russian forces in Ukraine seized Europe's biggest nuclear power plant on Friday in what Washington called a reckless assault that risked catastrophe, although a blaze in a training building was extinguished and officials said the facility was now safe.

Russian forces have launched a military assault on neighbouring Ukraine, crossing its borders and bombing military targets near big cities.

A senior official in Kiev has accused Russia of invading Ukraine after Russian humanitarian aid lorries crossed the border without permission.