crisisRussiaukraine
A senior official in Kiev has accused Russia of invading Ukraine after Russian humanitarian aid lorries crossed the border without permission.

Russia began sending in its lorries, stranded at the border for more than a week, after formally accusing Ukraine of unreasonable obstruction. 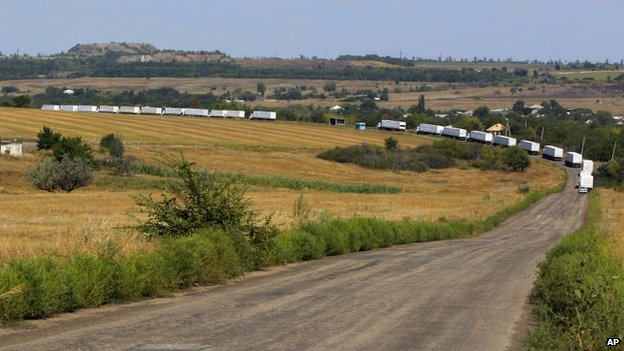 The aid is destined for civilians in the east Ukraine war zone.

Reports suggest the lorries are being escorted by rebel fighters.

The International Committee of the Red Cross (ICRC) said it was not part of the convoy "in any way".

Russia's foreign ministry has warned Ukraine not to take any action against the convoy, without specifying the consequences.

Ukraine fears that the aid convoy of at least 260 lorries, which arrived at the border more than a week ago, is part of a broader Russian intervention in eastern Ukraine.

Russia denies accusations that it arms and trains the rebels in the rebellion in Luhansk and the neighbouring region of Donetsk, where four months of fighting have left more than 2,000 people dead and caused more than 330,000 people to flee their homes.

The rebel-held city of Luhansk has been without running water, power and phone communications for 20 days as government forces hold it under siege.

"We are saying that this is a direct invasion," said Mr Nalyvaychenko in Kiev. "Under the cynical guise of the Red Cross these are military vehicles."

However, he added that Ukraine would not use any force against the convoy as it wished to avoid "provocations".

Another, unnamed Ukrainian government official told BBC News in Kiev: "All responsibility lies with the Russian side - not with the terrorists, but specifically the Russian side, because this is their decision."

As many as 90 lorries have entered Ukrainian territory, moving out of the no-man's land between the Russian and Ukrainian border posts.

Reporters at the scene saw rebel fighters in front of the convoy as it passed over the border in a rebel-held sector near the Russian town of Kamensk-Shakhtinsky. 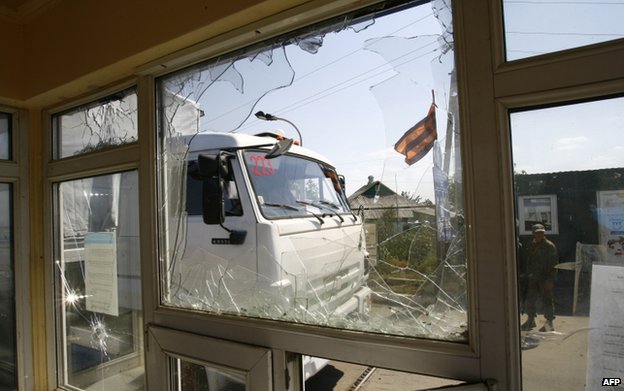 It is normally a drive of about two hours from the lorries' camp to the city of Luhansk.

However, it is unclear if the convoy will be able to use the motorway there because of continuing combat between rebels and government forces.

An ICRC spokesperson in Moscow said it had concluded that it had not "received the necessary security guarantees from the fighting parties to allow us to escort the convoy at this time".

"We understand that the convoy is now moving, however the ICRC is not part of that convoy in any way," the spokesperson added.

The Russian branch of the ICRC said earlier it was ready to take part in the relief operation and was contacting its international colleagues.

"Our humanitarian aid convoy is starting to move towards Luhansk," the Russian foreign ministry said in a statement

"We are warning against any attempts to sabotage this purely humanitarian mission, which was prepared a long time ago, in an atmosphere of full transparency and in co-operation with the Ukrainian side and the ICRC," the Russian foreign ministry said.

Delays in Ukrainian clearance for the convoy had "become unbearable", it said.

"All excuses for blocking the delivery of aid to people in the area where this humanitarian catastrophe is happening have been exhausted," it added.

"The Russian side has decided to act. Our convoy carrying humanitarian aid is beginning to move towards Luhansk."

Foreign journalists were allowed to look into the Russian lorries earlier and found they contained humanitarian supplies such as baby food and cereals.

In a statement on its website, Luhansk's official council reported on Friday that the dire situation in the city remained unchanged with no halt in the bombardment.

Russian forces in Ukraine seized Europe's biggest nuclear power plant on Friday in what Washington called a reckless assault that risked catastrophe, although a blaze in a training building was extinguished and officials said the facility was now safe.

Russian forces have launched a military assault on neighbouring Ukraine, crossing its borders and bombing military targets near big cities.