Sepp Blatter to Resign as Fifa President Amid Corruption Scandal

Sepp Blatter to resign as Fifa president amid corruption scandal

Sepp Blatter is to resign as president of world football's governing body Fifa as reports emerge he is under investigation in the United States.

The Swiss was re-elected last week, despite seven top Fifa officials being arrested in a massive corruption probe.

Announcing his shock exit, the 79-year-old Blatter, who has been in power for 17 years, said: "My mandate does not appear to be supported by everybody."

He plans to carry on his duties until a replacement can be elected.

Why stand down now?

Fifa has been dogged by corruption allegations for years now but it was rocked to its core last week by the arrests of seven Fifa officials on charges of racketeering, wire fraud and money laundering.

The charges are part of a US prosecution that indicted a total of 14 people from around the globe.

Further allegations emerged on Tuesday that increased the pressure.

Reports also claimed Fifa general secretary Jerome Valcke was responsible for an alleged payment of a $10m (£6m) bribe in relation to South Africa's bid to host the 2010 World Cup.

The 54-year-old Frenchman denies any wrongdoing.

A separate criminal investigation by Swiss authorities into how the 2018 and 2022 World Cups were allocated is also under way.

"He wanted to bring Fifa and football back together but that ignored the huge weight of the allegations that stood against the organisation," said Conway.

"In the end, Blatter's position became untenable and we will perhaps know more in the weeks ahead about what exactly tipped him over the edge."

Who wants to be the next Fifa president?

Prince Ali bin al-Hussein was beaten by Blatter in last week's election as the Swiss earned a fifth term in office.

The Jordanian has indicated he is willing to step into the role, insisting he is "always there to serve football".

He added: "I think that's the most important thing and to do so much work to fix this organisation in a proper way."

The 59-year-old Frenchman did not want to stand against Blatter but this could be his opportunity to make his move.

Former France international David Ginola has also confirmed he intends to stand but his chances of success are slim.

England lost out to Russia in the bidding for the 2018 World Cup.

Simon Johnson, who led England's bid, told BBC Radio 5 live: "I want the full facts around the bidding to be known and published. I want there to be openness and transparency.

"If everybody won it because of a fair fight and everything was fair and objective and transparent, then good.

"If it was found there was improper behaviour in any way by any of the winning bidders, then Fifa must have a look at whether they should re-open the process."

Johnson said he still thinks the 2018 tournament will go ahead.

"The preliminary draw for the Russia World Cup is a few weeks away and it's too late to change that," he said.

However, he felt Qataris may be worried about losing the 2022 competition, a sentiment echoed by Dyke.

"If I was in Qatar now, I would not be very confident," said Dyke.

"We would urge Mr Dyke to let the legal process take its course and concentrate on delivering his promise to build an England team capable of winning the 2022 Fifa World Cup in Qatar," he said.

Interpol Issues Alerts for 6, a Day After Sepp Blatter Resigns

Interpol issued wanted person alerts on Wednesday for two former senior FIFA officials and four corporate executives, one day after Sepp Blatter’s surprising announcement that he would resign as the head of soccer’s governing body. 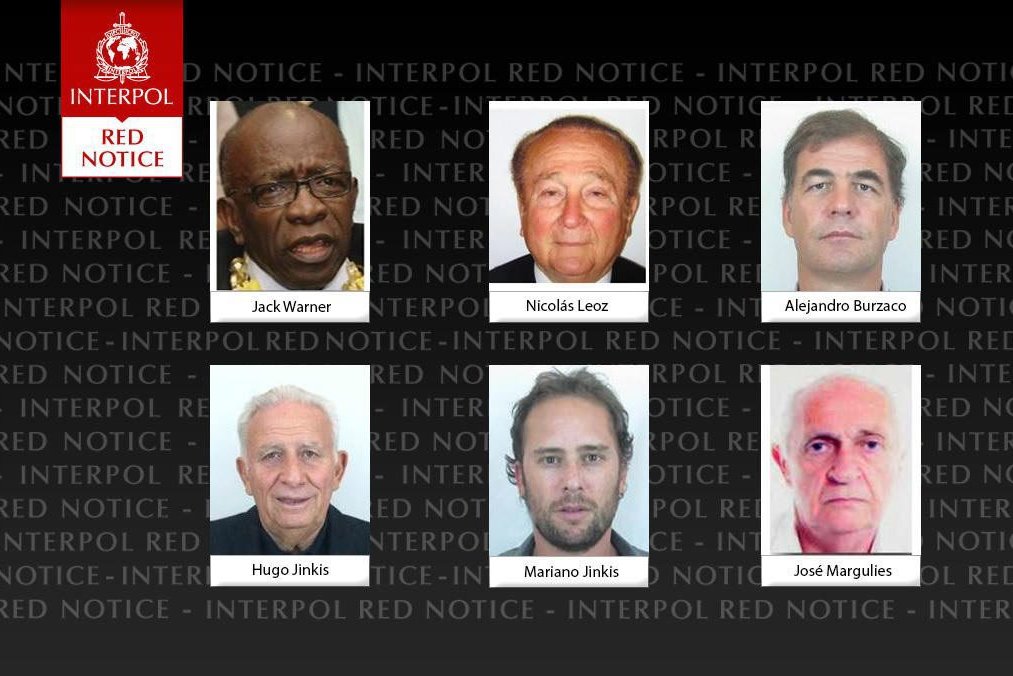 Mr. Blatter, who led FIFA for 17 years and was seen as a towering and influential figure in global sports, resigned on Tuesday. The announcement came just four days after he was re-elected as FIFA president, as law enforcement officials in the United States confirmed that he was the subject of the federal corruption investigation that has ensnared the organization.

Mr. Blatter was defiant after winning his fifth term, declaring “I forgive but I don’t forget,” raising the question of what led to his about-face. One answer may come today, when a judge in New York is expected to order the release the transcript of a 2013 hearing in which Chuck Blazer, a former member of FIFA’s executive committee who is now cooperating with the American authorities, pleaded guilty to corruption charges.

The Interpol alerts, so-called red notices, issued at the request of the United States, include the former FIFA vice president Jack Warner, who is from Trinidad and Tobago and is accused of accepting bribes in connection with the awarding of the 2010 World Cup to South Africa; Nicolás Leoz, a Paraguayan citizen and former FIFA executive committee member; Alejandro Burzaco, an Argentine who controls a sports marketing business based in Argentina; Hugo and Mariano Jinkis, Argentines who own a sports marketing business; and José Margulies, a Brazilian citizen who owns broadcasting businesses.

Publishing head shots of the six men on its website, Interpol said they were wanted “for charges including racketeering, conspiracy and corruption.”

Red notices are issued by Interpol to inform member nations that an arrest warrant has been issued for an individual, and that Interpol is seeking “the location and arrest of wanted persons with a view to extradition or similar lawful action.” But, crucially, red notices are not international arrest warrants, and Interpol does not have the power to compel other countries to arrest the subject of a red notice.

Mr. Blatter, a tenacious leader who has managed to distance himself from scandal in the past, appeared to yield to mounting pressure on Tuesday, when he announced his resignation. Speaking in French in front of a sparse audience at FIFA headquarters in Zurich, he said he would resign, although that process will take months.

Mr. Blatter showed up for work on Wednesday at FIFA headquarters, and a briefing was held for 350 staff members, a BBC reporter said on Twitter.

On Wednesday, Mr. Blatter’s daughter, Corinne Blatter-Andenmatten, told the Swiss daily newspaper Blick that her father’s resignation was not prompted by the corruption accusations. “His decision has nothing, absolutely nothing, to do with the allegations going around,” she told the paper.

As FIFA officials pledged to clean up the way the organization is run, Qatar sought to rebut a blog post on the website of The Washington Post alleging that 1,200 migrant workers were estimated to have died while working in construction for the 2022 World Cup. “This is completely untrue. In fact, after almost five million work-hours on World Cup construction sites, not a single worker’s life has been lost,” the Government Communications Office was quoted as saying by the state-run Qatar News Agency.

Qatar, which has fought calls for it to be stripped of the 2022 World Cup over concerns about the bidding process, has also faced widespread criticism for the safety and treatment of migrant workers building the stadiums needed for the tournament. The Qatari government has since said that it wants to prevent abuses, and has introduced a system of oversight intended to ensure that workers’ salaries are paid, but a report by Amnesty International released last month said that Qatar was failing to live up to its promises.

UEFA, European soccer’s governing body, has postponed a meeting in Berlin that was set for this weekend that was originally intended to discuss how to respond to Mr. Blatter’s re-election as president of FIFA. UEFA’s president, Michel Platini, said in a statement that the investigation underway in the United States was “unpredictable” and that it was better to wait and assess the situation following Mr. Blatter’s announcement that he would resign.

Hyundai Motor Company, the South Korean carmaker, on Wednesday became the latest FIFA sponsor to welcome Mr. Blatter’s announcement. Hyundai and Kia Motors Corporation, joint sponsors of the 2018 World Cup in Russia, said it was a “positive first step” and would allow an overhaul of how FIFA was administered.

The comments came after Visa said it expected FIFA to “rebuild a culture with strong ethical practices,” and Coca-Cola called Mr. Blatter’s announcement a “positive step for the good of sport, football and its fans.”

Speculation continued to swirl about who would replace Mr. Blatter as president of FIFA, with Mr. Platini quickly emerging as a likely candidate. Mr. Platini once was so close to Mr. Blatter, 79, that he characterized him as an uncle, but he became one of his toughest critics and asked him on Friday to resign.

Mr. Platini, 59, was a star player and later a coach for the French national team, and he played a central role in organizing France’s 1998 World Cup. But FIFA members may prefer a fresher face.

Another contender is Prince Ali bin al-Hussein of Jordan, who ran a strong campaign against Mr. Blatter in last week’s election, losing to Blatter, 133 to 73 in the first ballot before conceding. He ran on a platform of rooting out corruption from the organization, and on Tuesday he told CNN that he would be “at the disposal” of anyone who wanted to bring about change at FIFA, including those who might have been “afraid to do so” before Mr. Blatter’s announcement.

On Wednesday, Frank Lowy, chairman of the Football Federation of Australia, issued an open letter about Mr. Blatter’s resignation and Australia’s failed bid to host the 2010 World Cup, suggesting that his organization had paid funds to FIFA that ended up in the hands of Mr. Warner.

Mr. Lowy said that the Australian federation had donated money to Concacaf, the umbrella federation for North and Central America, which had asked Australia to donate $4 million for a feasibility study for the development of a center of excellence in Trinidad and Tobago. Instead, he said, the association compromised and offered $500,000. He said that a Concacaf investigation subsequently found that Mr. Warner had committed fraud and misappropriated the funds.

“We ran a clean bid and we are proud of that but it wasn’t a level playing field and therefore we didn’t win it,” he wrote. “I will always be bitterly disappointed about the outcome.”

Sepp Blatter and Michel Platini, two of the most powerful figures in world of football, were barred from the sport for eight years on Monday morning after being found guilty of ethics violations.

Arvind Kejriwal's top bureaucrat Rajender Kumar has, among other charges, been accused of keeping 14 liquor bottles at home. He is being questioned again on corruption allegations, a day after raids on him had the Chief Minister calling Prime Minister Narendra Modi a "coward and psychopath" who was targeting his government.

Jérôme Valcke, the second-ranking official at FIFA, was placed on immediate leave and will be investigated for allegations of corruption involving the black-market sale of World Cup tickets, the association announced Thursday.