AirlinesIndonesiatrigana air
earchers struggled with rugged, forested terrain Monday, trying to reach debris believed to be from an Indonesian airliner. They gave up when bad weather made it impossible to proceed and planned to try again Tuesday.

Officials believe the debris is from a Trigana Air Service flight that apparently crashed Sunday with 54 people on board.

Officials deployed two ground teams to the site, which is at an altitude of 2,600 meters (8,500 feet), but suspended efforts to get there because of thick fog.

The teams are in the mountains waiting for better conditions and may have to spend the night there, said Tatang, a senior Papua police official who goes by one name.

Search officials are borrowing a helicopter from Freeport-McMoRan, a mining company, that can use hoists and long lines to lower members of the emergency response team to the scene. But officials said the bad weather also prevented the chopper from flying to the site Monday.

Report of crash from villagers

The plane lost contact with air traffic control on Sunday. There was no indication that a distress call was made from the plane, Indonesian Transportation Ministry spokesman J.A. Barata told CNN Indonesia.

There are many possible reasons for the apparent lack of a distress call, CNN aviation analyst Mary Schiavo said. It could indicate that crew members were too busy dealing with whatever situation arose to send one, or that they didn't realize they were in trouble, she said.

Villagers reported seeing a plane crash into a mountain, according to Indonesian aviation authorities. The site is about 14 kilometers (9 miles) from the airport where the plane was supposed to land.

The plane was carrying 44 adult passengers, five children and five crew members when it went missing just over half an hour into a short domestic flight between Jayapura, the provincial capital of Papua, and Oksibil, an inland town near the border with Papua New Guinea.

All those on board were Indonesian, authorities said. 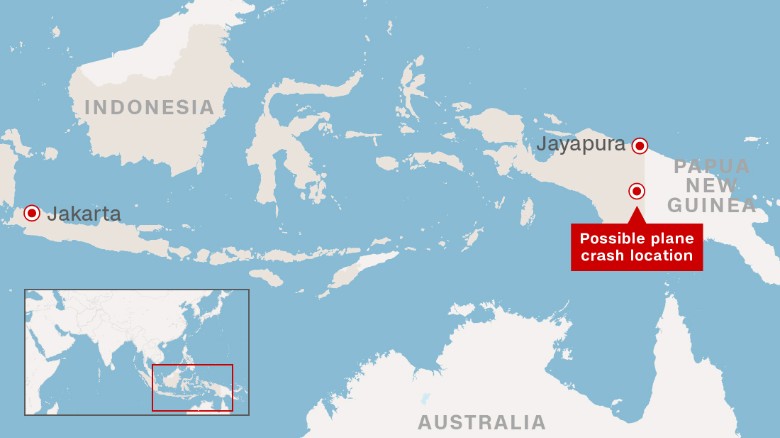 Weather patterns are unpredictable in the region, with a tropical climate, tall mountains and moisture coming in from the sea.

Papua has few roads connecting cities, towns and remote tribal villages. To get where they want to go, people either have to take a plane or a boat -- or walk, which can sometimes take months.

"This is a place where some people still hunt their food with bows and arrows while others buy it in supermarkets," the travel guide Lonely Planet says in its description of the province.

A big part of Trigana Air's business is ferrying people and cargo between different parts of Papua.

Before Sunday's crash, the airline had been involved in 19 serious safety incidents since 1992, according to Flightglobal, a website that tracks the global aviation industry.

Eight of the incidents resulted in the loss of the aircraft, and the 11 others involved major damage, Flightglobal said.

Trigana is one of a large number of airlines banned from operating in European airspace "because they are found to be unsafe and/or they are not sufficiently overseen by their authorities," according to the European Commission.

The loss of the ATR 42-300 turboprop aircraft is Indonesia's third air disaster in less than eight months.

In December, AirAsia Flight QZ8501 went down in the Java Sea while headed from Surabaya, Indonesia, to Singapore. All 162 people on board were killed.

And in June, an Indonesian military transport plane crashed soon after taking off from the city of Medan, killing at least 135 people.

Nearly 300 crocodiles were slaughtered in revenge killings by a mob in Indonesia over the weekend. The incident happened shortly after the funeral of a man in his 40s who himself was killed by a crocodile in the Indonesian state of West Papua.

Something has washed up on the shore of an Indonesian island. It's huge, it's floating — and it's rotting. A large 15m (49.2 ft) long sea creature was discovered off Hulung Beach, on Seram Island, Indonesia.

An erupting volcano in Indonesia has forced the cancellation of hundreds of flights in and out of the airport on the popular resort island of Bali.

The French first officer of an AirAsia passenger jet that crashed into the sea last month was at the controls just prior to the accident, Indonesia's lead investigator said on Thursday.

Indonesian navy divers retrieved the black box flight data recorder from the wreck of an AirAsia passenger jet on Monday, a major step towards investigators unraveling the cause of the crash that killed all 162 people on board.