The discovery that neutrinos switch between different "flavours" has won the 2015 Nobel Prize in physics.

Neutrinos are ubiquitous subatomic particles with almost no mass and which rarely interact with anything else, making them very difficult to study.

Takaaki Kajita and Arthur McDonald led two teams which made key observations of the particles inside big underground instruments in Japan and Canada.

They were named on Tuesday morning at a news conference in Stockholm, Sweden.

Goran Hansson, secretary general of the Royal Swedish Academy of Sciences, which decides on the award, declared: "This year's prize is about changes of identity among some of the most abundant inhabitants of the Universe."

Telephoning Prof McDonald from the conference, he said: "Good morning again - I'm the guy who woke you up about 45 minutes ago."

Prof McDonald was in Canada, where he is a professor of particle physics at Queen's University in Kingston. He said hearing the news was "a very daunting experience".

"Fortunately, I have many colleagues as well, who share this prize with me," he added. "[It's] a tremendous amount of work that they have done to accomplish this measurement.

"We have been able to add to the world's knowledge at a very fundamental level."

Prof Kajita, from the University of Tokyo, described the win as "kind of unbelievable". He said he thought his work was important because it had contradicted previous assumptions.

"I think the significance is - clearly there is physics that is beyond the Standard Model." 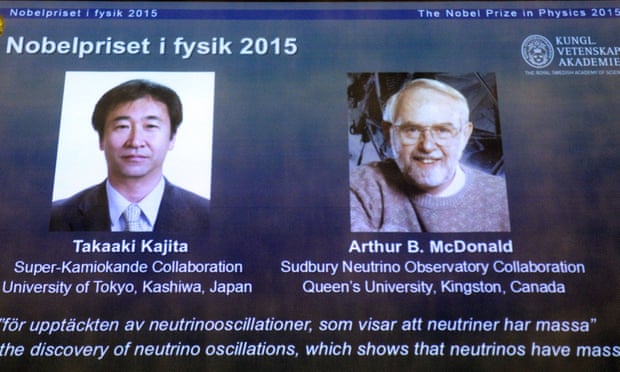 Nobel Prize for Chemistry: Lindahl, Modrich and Sancar Win for DNA Research
The Nobel prize in chemistry has been awarded to Tomas Lindahl, Paul Modrich and Aziz Sancar for their research into the mechanisms that cells use to repair DNA.

Tiny machines win chemistry Nobel prize
The 2016 Nobel Prize for Chemistry has been awarded for the development of the world's smallest machines.

Nobel Prize in Medicine Is Awarded to Three Who Discovered Brain’s ‘Inner GPS’
A British-American scientist and a pair of Norwegian researchers were awarded this year’s Nobel Prize in Physiology or Medicine on Monday for discovering “an inner GPS in the brain” that enables virtually all creatures to navigate their surroundings.
Tags:
Nobel Prizescience