medicineNobel Prizephysicsscience
2016 Nobel Prize in physics awarded to three men for revealing ‘the secrets of exotic matter’; The Nobel Prize in Medicine Goes to Your Body, Eating Itself 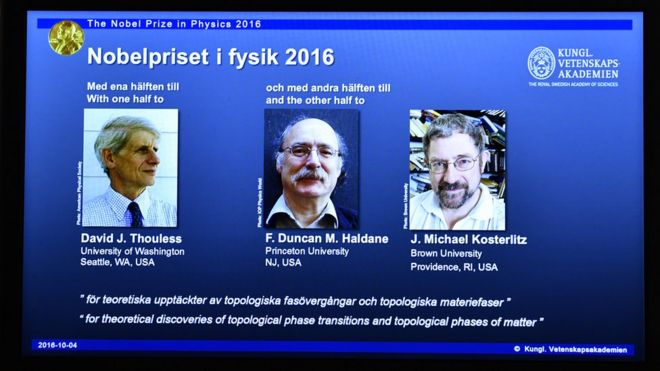 Most matter exists in the states we see every day: gases, liquids and solids. But at extremely low or high temperatures, matter can start to behave strangely. The three laureates have used advanced mathematical modeling to demonstrate some of the strange properties that can arise in unusual states of matter. In a cold layers of atoms so flat they can be considered two dimensional, you can find superconductors – materials where electrical current can flow through with no resistance from the particles therein – and superfluids, where vortexes can spin forever without slowing down for the same reason.

Using topology – the study of changes that occur step-wise, the properties that remain intact when an object is stretched, twisted or deformed, but not if it is torn apart – the three researchers helped reveal the stunningly strange behaviors of these exotic states of matter.

In the early 1970s, Michael Kosterlitz and David Thouless modeled the existence of superconductivity and suprafluidity in thin layers, overturning the prevailing theory that such configurations of matter could not exist. They demonstrated that superconductivity could occur at low temperatures and also explained the mechanism, phase transition, that makes superconductivity disappear at higher temperatures.

In the 1980s, Duncan Haldane discovered how topological concepts can be used to understand the properties of chains of small magnets found in some materials.

Haldane spoke to the press gathered in Stockholm for Tuesday's announcement, having been reached on the phone around 5:30 a.m. eastern time.

"I was, as everyone else is, very surprised," Haldane said. "And very gratified."

"It was a long time ago," he said of his own research, "But it’s only now that lots of tremendous new discoveries based on this original work have extended it in many ways."

Last year's Nobel Prize in physics was shared by Takaaki Kajita of the University of Tokyo and Arthur B. McDonald of Queen’s University in Canada. Kajita and McDonald were honored for their work on neutrinos, some of the subatomic particles that make up our universe. The two men contributed to research showing that neutrinos, once thought to be massless, indeed have mass.

The award, which was established by Swedish inventor Alfred Nobel in 1895, comes with a prize worth 8 million Swedish krona, or about $937,000. According to the Royal Swedish Academy, the prize is being split two ways – Thouless will receive half the 8 million krona, or around $464,000, because he made "crucial contributions" on multiple fronts. Haldane and Kosterlitz will split the remaining $464,000.

The Nobel Prize in Medicine Goes to Your Body, Eating Itself

THE 2016 NOBEL Prize for Physiology or Medicine goes to the discovery that … wait for it … your body is eating itself. Autophagy, fully described in the 1990s by Japanese biologist Yoshinori Ohsumi, is how cells recycle damaged, diseased, or worn-out bits of microscopic machinery into new, fully functional organic stuff. 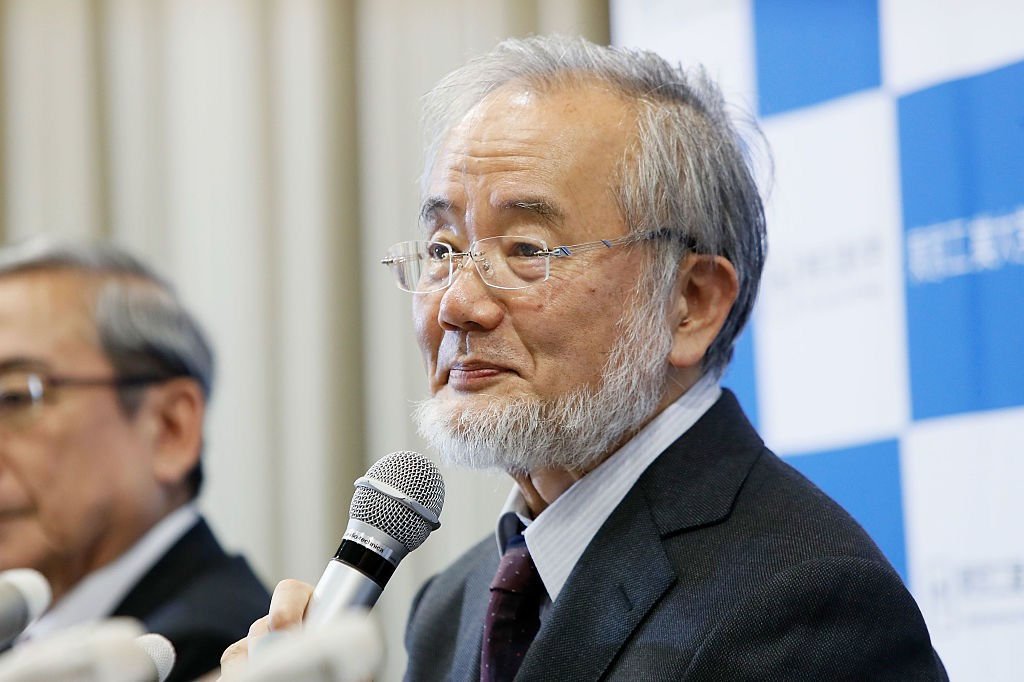 Autophagy is a crucial part of your health. Whether through physical trauma, infection, or just age, your cells are constantly getting damaged. Without this biological recycling process, your body would quickly clutter up with busted-down cellular parts. Diseases like Parkinson’s and some types of cancer are caused when autophagy breaks down. It’s also how humans survive starvation, because it allows the body to cannibalize itself for energy.

Biologists have known that cells recycle themselves for a while. But Ohsumi’s work in the 1990s—while he was a junior researcher at the University of Tokyo—identified the genes and metabolic pathways that trigger autophagy. His pioneering work opened up a whole new branch of biology looking into how bodies use (or fail to use) self-cannibalization to stay healthy.

In addition to international acclaim, Sweden’s Karolinksa Institute awarded Ohsumi nearly $1 million for his discovery on Monday, October 3. The institute will announce the Nobel Prize in Chemistry on October 5.

The 2016 Nobel Prize for Chemistry has been awarded for the development of the world's smallest machines.

The Nobel prize in chemistry has been awarded to Tomas Lindahl, Paul Modrich and Aziz Sancar for their research into the mechanisms that cells use to repair DNA.

The discovery that neutrinos switch between different "flavours" has won the 2015 Nobel Prize in physics.

The Nobel Prize for medicine has been jointly awarded this year to three scientists for their work on parasitic diseases.

Landing on a Comet, a Mission Aims to Unlock the Mysteries of Earth

In a technological feat that gives scientists their first opportunity to dig into a remnant of the early solar system, the European Space Agency’s Rosetta mission successfully placed a small spacecraft on the surface of a speeding comet on Wednesday.

Two Americans and a German won the Nobel Prize in chemistry this year for their work on optical microscopy that has opened up our understanding of molecules by allowing us to see how they work close up.