CyprusEgyptHijack
A man claiming to be wearing an explosive vest hijacked an EgyptAir plane on Tuesday, forcing it to land in Larnaca, on the southern coast of Cyprus, before he was arrested, according to the Cypriot government.

“It’s over,” the Cypriot Foreign Ministry announced at 2:41 p.m.

Most of the 56 passengers were released after the flight was diverted while en route to Cairo from Alexandria. But a tense standoff ensued for hours as the plane stayed on the tarmac, with the hijacker and seven or eight other people still on board. Then they were freed, and shortly afterward, the hijacker surrendered.

The hijacker, identified by Cypriot and Egyptian officials as Seif Eldin Mustafa, told the pilot that he was wearing a suicide belt and threatened to detonate it. His affiliation and motivation were unclear 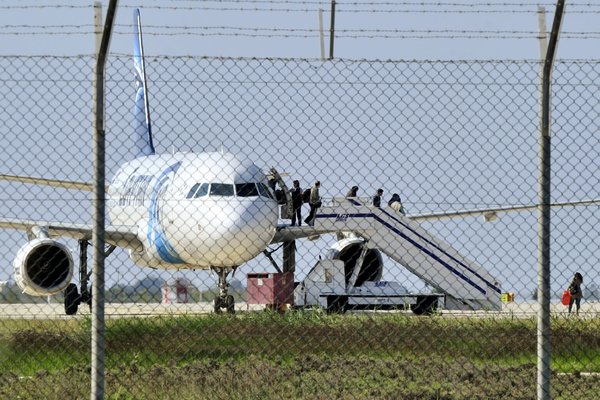 But some Cypriot state media reports said the man had given negotiators a letter demanding the release of prisoners from Egyptian jails, suggesting a political motivation.

Conflicting reports about the crisis from Egyptian officials — who for a time mistakenly identified another passenger as the hijacker — raised further questions about Egypt’s aviation security abilities, six months after a bomb brought down a Russian airliner in the Sinai Peninsula, killing all 224 people on board.

Citizens of at least eight countries, including the United States and Italy, had been on board.

The passenger who had been mistakenly identified as the hijacker, Ibrahim Samaha, a professor from the University of Alexandria, later called the BBC to say that he had been a victim.

“We had no idea what was going one,” Mr. Samaha said. “After a while we realized the altitude was getting higher, then we knew we were heading to Cyprus. At first the crew told us there was a problem with the plane and only later did we know it was hijacked.”

In a statement on its Facebook page, EgyptAir identified the flight as MS181 and said it left Borg el-Arab airport in Alexandria at 6.30 a.m, bound for Cairo. It was carrying 56 passengers, seven crew members and one EgyptAir security officer. (The airline had said earlier that there had been 81 people on the plane.)

The hostages remaining on the plane included two pilots, an attendant and the security officer, officials said. Some news outlets posted a picture of a man standing in the aisle of the plane, whom they identified as the hijacker.

Cypriot officials said the hijacker had initially demanded that the plane fly to Turkey but agreed to let it land in Cyprus after pilots told him they did not have enough fuel for a longer flight.

Hosni Hassan, a senior official at Borg el-Arab Airport, said by telephone that a majority of the passengers were Egyptian but that the passengers also included citizens from seven other countries, including Belgium, Greece, Italy and the United States.

The crisis had appeared to be coming to an early conclusion after the hijacker allowed 56 people to walk free from the plane. Video from the airport showed passengers walking down the stairs from the plane, an Airbus A320, and walking a short distance across the tarmac at Larnaca International Airport before boarding a bus. Many were walking calmly and carrying their luggage.

But six hours later, the hostage crisis appeared to be deepening amid reports that police at the Larnaca airport had moved back news crews at the airport and cleared nearby restaurants. Security forces took positions around the airport, and snipers were in place.

Aviation security in Egypt has been under sharp scrutiny since a Russian airliner crashed shortly after taking off from the Red Sea resort of Sharm el Sheikh on Oct. 31, killing all 224 on board.

A local affiliate of the Islamic State said it had brought down that plane with a bomb. Russia and Egypt attributed the crash to terrorism, although an Egyptian-led investigation has yet to publish its findings.

At least 235 people were killed and another 109 injured in an attack on a Sufi mosque in Egypt's North Sinai region on Friday, Egyptian state-run media reported, in what appears to be the deadliest terror attack on Egyptian soil.

Two trains collided in Egypt's coastal city of Alexandria on Friday killing 36 people and injuring more than 100 others, a health ministry spokesman said.

Egypt Gives Saudi Arabia 2 Islands in a Show of Gratitude

Since King Salman of Saudi Arabia arrived in Cairo on Thursday for a five-day visit, the leader of the oil-rich kingdom has lavished his Egyptian allies with promises of aid and investment.

The grinning man in that photo with the hijacker of an EgyptAir flight yesterday basically just did it for the "selfie of a lifetime."

Mubarak to Stand Trial Again over 2011 Killing of Protesters

Former Egyptian President Hosni Mubarak will face a second and final retrial over the killing of protesters during the 2011 uprising that ended his 30-year rule, a high court said on Thursday.