singapore
Singapore’s dollar slumped the most since August, dragging down other Asia-Pacific currencies, as surprise easing by the central bank fueled speculation other policy makers in the region will follow suit.

New Zealand’s dollar, Malaysia’s ringgit and Indonesia’s rupiah also weakened after the Monetary Authority of Singapore said it would seek a policy of zero appreciation against an undisclosed basket of currencies, returning to a neutral stance it adopted in the global financial crisis in 2008. Singapore’s central bank cited “a less favorable external environment” in its policy statement, adding to concern the outlook for global growth is worsening.

“Today’s decision by the Monetary Authority of Singapore has put downward pressure on currencies in the Asia-Pacific region," said Hirofumi Suzuki, an economist at the treasury department of Sumitomo Mitsui Banking Corp. in Singapore. “Some market participants fear a revival of a competitive currency devaluation." 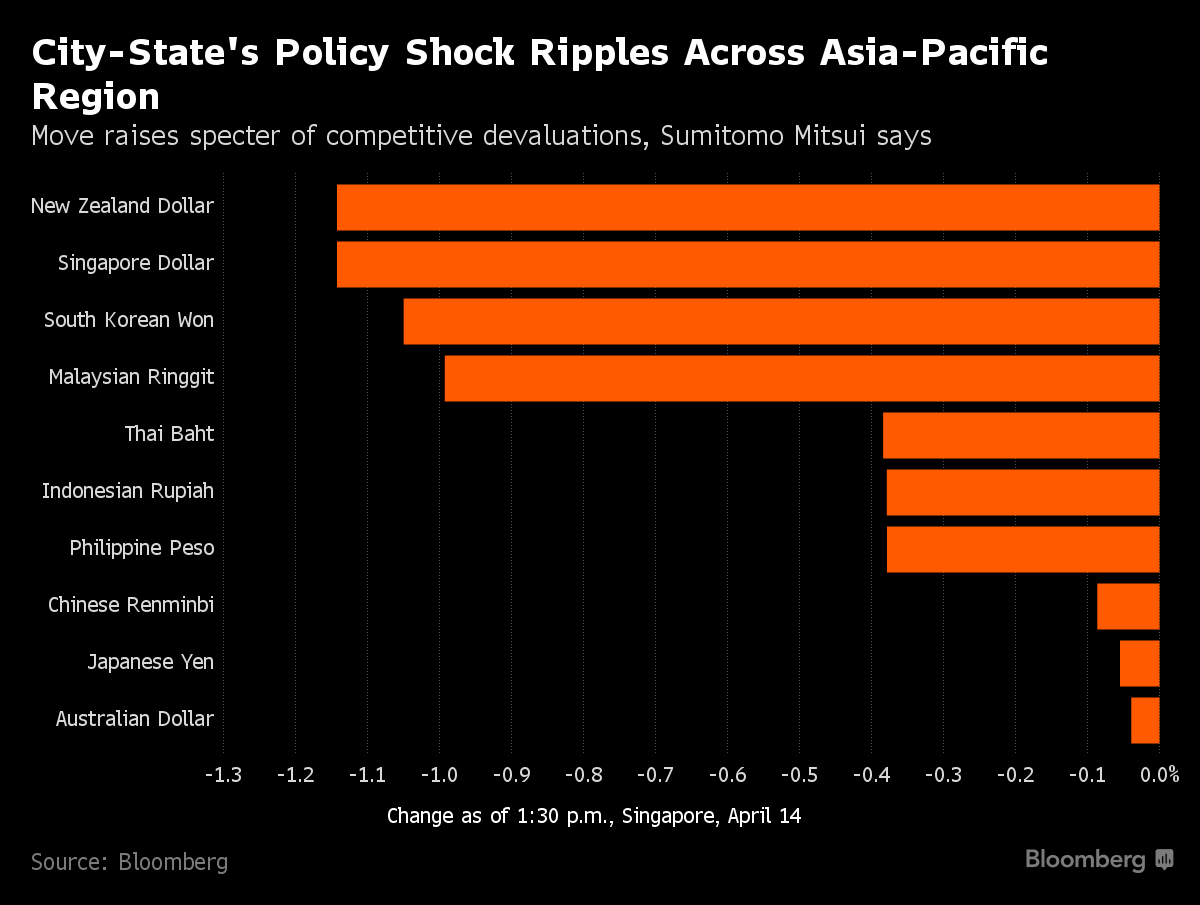 The Canadian dollar declined for a second day after the central bank said on Wednesday the currency’s rally since the middle of January has damped the outlook for the country’s non-resource exports. The loonie dropped 0.3 percent to C$1.2859 to the greenback.

The Monetary Authority of Singapore said in its statement the new stance wasn’t intended to weaken the local currency, rather it only removes the path for a modest and gradual appreciation against the trading basket that had been in place the past six years. Growth stagnated in the first quarter, with gross domestic product posting zero expansion on an annualized basis from the previous three months, the trade ministry said in a separate report Thursday.

“There’s been a deterioration of economic conditions since the last meeting,” said Philip Wee, senior currency economist at DBS Group Holdings Ltd. in Singapore, who correctly predicted that the MAS would ease policy. “If things have already worsened why wait for October to ease?"

This was the Singapore central bank’s second unexpected decision in less than 16 months. It made an emergency policy change in January last year to combat the threat of deflation following a slump in oil prices. Twelve of 18 economists surveyed by Bloomberg predicted the central bank would maintain policy Thursday, while the rest forecast it would ease.

“Although the MAS said that they have no intention to depreciate the domestic currency, I don’t see this as necessarily the end of the easing cycle,” said Khoon Goh, a senior foreign-exchange strategist at Australia & New Zealand Banking Group Ltd. in Singapore. “If downside growth and inflation risks remain, then the next easing move would be a re-centering in October.”

The co-founder of a Singapore church and five other leaders were convicted of multi-million dollar fraud on Wednesday for diverting money to support his wife's pop singing career, a rare fall from grace in the tightly regulated city-state.

Singapore has closed its schools after the pollution levels caused by the smoky smog enveloping the city hit dangerously high levels.

Singapore Turns 50, and Celebrates with Fanfare

Fireworks lit up Singapore's sky as crowds celebrated the city state's 50th anniversary on Sunday, an occasion of national pride the ruling party is expected to exploit by calling an election next month.

Police in Singapore have charged 24 Indian nationals with rioting after violent protests on Sunday night over the death of a migrant worker.