awardsjournalismPulitzer Prize
The Pulitzers are in their centennial year, and the winners announced on Monday reflected in part the changes sweeping the media landscape.

The Marshall Project, an online outlet founded 17 months ago, won the explanatory reporting prize for its harrowing account of a botched rape investigation, a collaboration with ProPublica, another digital news organization dedicated to investigative reporting. The New York Times won awards in two categories.

The A.P.’s investigation into the use of slave labor across the seafood industry in Southeast Asia traced how that very seafood was then sold across supermarkets and restaurants in the United States.

The Pulitzer committee credited the wire service for a series of articles that “freed 2,000 slaves, brought perpetrators to justice and inspired reforms.” It was the 52nd Pulitzer for The A.P. but its first victory in the prestigious public service award.

The Post identified 990 fatal shootings nationwide in 2015, far more than ever recorded by the federal government.

The database, built by The Post’s data journalists and graphic designers, was an interactive, searchable tool that provided insights on the shootings in real time.

The project included roughly 70 journalists from various departments at the paper, said Kimberly Kindy, one of the lead reporters who wrote articles that accompanied the database.

They also showed that the school board took no action as overwhelming numbers of children began failing and teacher turnover soared. The federal education secretary at the time, Arne Duncan, accused the district of “educational malpractice.” (Mr. LaForgia shared the Pulitzer for local reporting in 2014.) 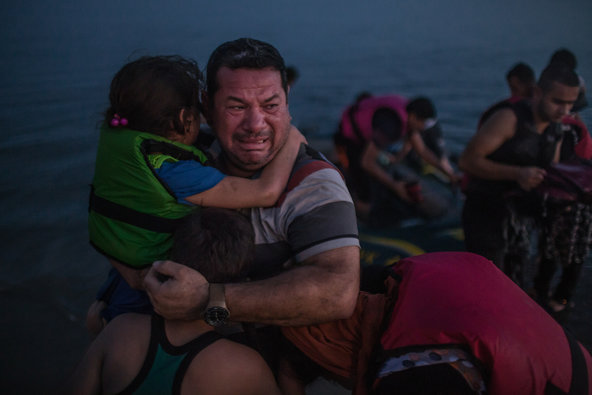 Both teams documented the huge scale of the migrant crisis as it swept across Europe and the individual pain of families finding their way in the turmoil.

The four Times photographers — Mr. Lima, 40; Mr. Ponomarev, 35; Mr. Hicks, 46; and Mr. Etter, 35 — logged thousands of miles. One photograph taken by Mr. Etter, of a father in tears as he hugged his daughter and son after enduring the voyage from Turkey, was shared widely on the Internet. 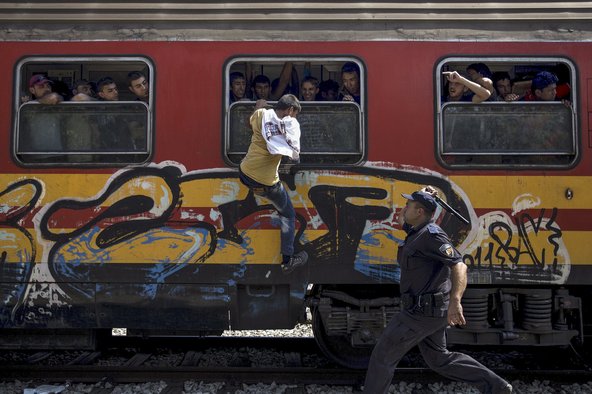 The eight Reuters photographers were cited for “gripping photographs, each with its own voice.” 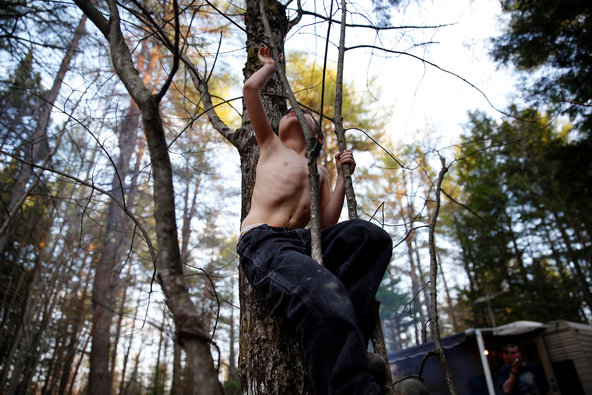 Ms. Rinaldi, 36, was recognized for her “raw and revealing” photographs of a 5-year-old boy struggling to regain his footing after nearly dying at the hands of his mother’s abusive boyfriend. She said she was grateful to the family in rural Maine who trusted her to document “a side of life that’s seldom seen, especially a boy who has gone through such trauma.” Ms. Rinaldi has won several local and national awards. Her project chronicling the opioid epidemic was also a finalist in this category.

The prize committee honored Ms. Schulz, 42, for her vivid investigation into the Cascadia subduction zone, a fault line that threatens to unleash “the worst natural disaster in the history of North America,” potentially ravaging vast portions of the Pacific Northwest with a huge earthquake and resultant tsunami. “It felt like the very rare piece where I knew what the stakes were, and they’re personal to me, and they’re personal to a lot of people — millions in the region,” she said.

Ms. Nussbaum, 50, the magazine’s television critic since 2011, was praised for a set of reviews and essays about subjects like Joan Rivers’s legacy, David Letterman’s last shows, Robert Durst and the end of “Mad Men” — all of them, the committee said in its citation, “written with an affection that never blunts the shrewdness of her analysis or the easy authority of her writing.”

In a series of reported columns, Ms. Stockman wrote about the legacy of busing in Boston, which began there in 1974, and about the complex problems of race relations that persist today, in that city and throughout the country.

Ms. Stockman, 41, said that in some ways she was guided by her own family history, as the daughter of a black mother from Mississippi and a white father from Pennsylvania. “I realized that two reasonable, good people could have very different views of the same facts,” she said.

Last month, Ms. Stockman joined The New York Times as a political reporter. Her first article for the paper was published on Monday, on the front page. 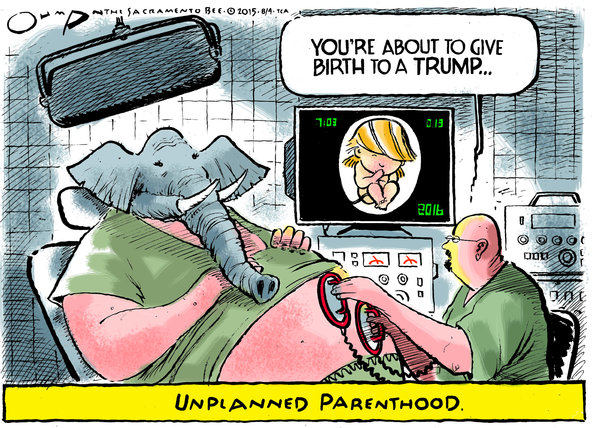 His favorite from his winning package, “Unplanned Parenthood,” shows the Republican elephant getting an ultrasound as an orange-haired figure appears on the screen and the technician says, “You’re about to give birth to a Trump.” 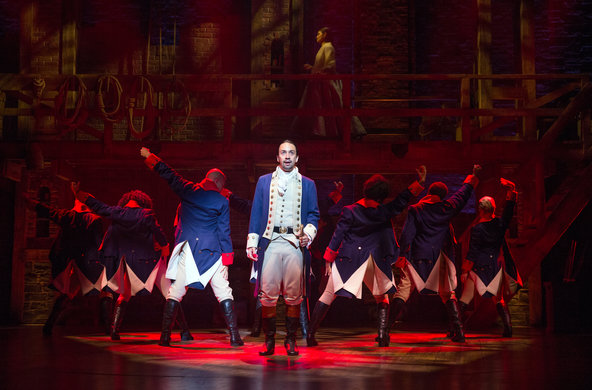 Mr. Miranda’s work, a musical about the life and death of Alexander Hamilton, is distinguished by its use of hip-hop music and a predominantly Hispanic and African-American cast to explore American’s revolutionary era. The show is an enormous commercial and critical success; Mr. Miranda, 36, wrote the music, book, and lyrics, and stars as the title character.

“This feels very strange and surreal indeed — I’m really overwhelmed,” hesaid in a telephone interview from a recording studio where he is working on music for a Disney movie. “‘Hamilton’ was written in my free time for many years,” he added. “I never thought that his alma mater would be giving me a Pulitzer.”

Mr. Warrick’s book explores how the United States’ flawed military strategy in Iraq helped fuel the rise of the terrorist group the Islamic State. Mr. Warrick, 55, who covers national security and the Middle East for The Washington Post, shared the prize for Public Service in 1996 while at The News & Observer in Raleigh, N.C.

“Between the World and Me,” by Ta-Nehisi Coates

“If the Oceans Were Ink: An Unlikely Friendship and a Journey to the Heart of the Quran,” by Carla Power

“Surfing only looks like a sport,” the jury wrote in its citation for Mr. Finnegan’s memoir of more than five decades on and off the waves, which it praised as taking readers “deep into unfamiliar worlds, some of them right under our noses.”

If surfing comes naturally to Mr. Finnegan, 63, a staff writer at The New Yorker, writing a memoir didn’t. “For a reporter, memoir is this weird genre,” he said. “The self-absorption of it was hard to justify. I’d work hard for a few months and get really sick of myself. It was a really big genre jump for me.”

Elizabeth Alexander, “The Light of the World: A Memoir”

T.J. Stiles, “Custer’s Trials: A Life on the Frontier of a New America” (moved by the board to the history category)

“Custer’s Trials: A Life on the Frontier of a New America” (Alfred A. Knopf)

Mr. Stiles, 51, was cited for a “magisterial” biography that “radically changes our view of the man and his turbulent times,” looking past a tidy narrative that ends at Little Bighorn to take in the vast panorama of America’s transformation in the 19th century.

In an interview, Mr. Stiles said he was drawn to the subject by the richly emotional documentation left by Custer and the people who lived most intimately with him, including his wife, Libby Bacon, and Eliza Brown, a self-emancipated black woman who worked as a cook in camp for Custer.

“The tensions of friendship across the color divide and the gender divide are central to the book,” he said.

Viet Thanh Nguyen, 45, won the Pulitzer Prize for fiction for his debut novel, “The Sympathizer,” which opens in 1975 in Saigon and is narrated by “the captain,” a Communist sympathizer who escapes to Los Angeles and spies on a South Vietnamese group he has infiltrated.

Part satire, part espionage thriller and part historical novel, “The Sympathizer” grew out of Mr. Nguyen’s desire to “write a novel that would allow me to explore the complexity of the Vietnam War, through all eyes;it’s meant to be entertaining and provocative.”

“Get in Trouble,” a short story collection by Kelly Link

Mr. Threadgill, the pathbreaking 72-year-old saxophonist, flutist and composer who has expanded the horizons of jazz, won for this 2015 recording featuring his quintet, Zooid, which the Pulitzer board described as “a highly original work in which notated music and improvisation mesh in a sonic tapestry that seems the very expression of modern American life.”

Carter Pann, “The Mechanics: Six From the Shop Floor”

Mr. Balakian’s seventh book of poems, like much of his previous work, is deeply rooted in thoughts about the Armenian genocide. The author, 64, traveled in 2009 to excavate the bones of victims in the Syrian desert. The title poem of “Ozone Journal”— a 55-section collage that moves between that 2009 experience and memories of life in 1980s Manhattan — is a sequel to an earlier work.

“Poetry in particular has a great capacity to absorb history,” he said. “It can make historical memory into a dynamic contemporary force, so that the past seems alive — is alive.”

The Times’s coverage of the mass shooting in San Bernardino, Calif., which killed 14 people, was a newsroomwide effort that resulted in a live-blog that was constantly being refreshed, and a main news story that was updated 22 times. After the attacks, the San Bernardino Fire Department said on Twitter, “Live updates on today’s events can be found on the L.A. Times website.” The Pulitzer committee credited The Times for “exceptional reporting, including both local and global perspectives.”

Mr. Miller of ProPublica; Mr. Armstrong of The Marshall Project

The Pulitzer committee cited Mr. Miller, 46, and Mr. Armstrong, 53, for their 12,000-word article, “An Unbelievable Story of Rape,” about a failed police investigation into a young woman’s allegations of rape. Mr. Miller and Mr. Armstrong began their work separately but realized during their reporting that they were both chasing the same story from different angles. Rather than compete with each other, they “joined hands to produce a bigger story,” Mr. Miller said.

Ms. Anton and Mr. Cormier of The Tampa Bay Times; Mr. Braga of The Sarasota Herald-Tribune

Ms. Anton, 51, Mr. Cormier, 37, and Mr. Braga, 55, were recognized for their series, “Insane. Invisible. In Danger,” which connected steep budget cuts with rising violence and neglect at Florida mental hospitals. The prize committee praised the series as a “stellar example of collaborative reporting by two news organizations” that “laid the blame at the door of state officials.”

Ms. Rubin was awarded the prize for reports illuminating the struggles endured by women in postwar Afghanistan. The committee highlighted an investigation into the death of Farkhunda Malikzada, 27, who was killed by a mob, and the failure of Afghanistan’s legal system in its aftermath. Ms. Rubin, 56, is The Times’s bureau chief in Paris.

“I always am curious what people who are usually invisible are thinking, and how they see the world,” she said. She thanked the many women who chose to speak with her. “I hope I’ve honored them in writing about them,” she said.

The staff of The New York Times