An American-born man who'd pledged allegiance to ISIS gunned down 50 people early Sunday at a gay nightclub in Orlando, the deadliest mass shooting in the United States and the nation's worst terror attack since 9/11, authorities said.

Mateen carried an assault rifle and a pistol into the packed Pulse club about 2 a.m. Sunday and started shooting, killing 50 people and wounding at least 53, police said.

After a standoff of about three hours, while people trapped inside the club desperately called and messaged friends and relatives, police crashed into the building with an armored vehicle and stun grenades and killed Mateen. 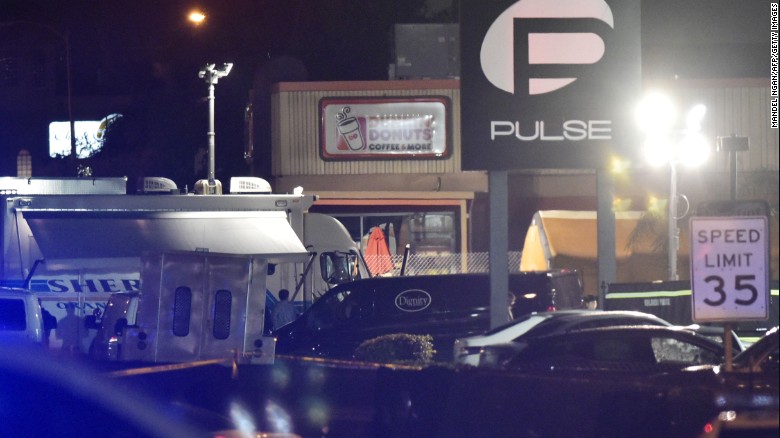 There has been no claim of responsibility for the attack on jihadi forums, but ISIS sympathizers have reacted by praising the attack on pro-Islamic State forums.

"We know enough to say this was an act of terror and act of hate," President Obama said in an address to the nation from the White House.

While the violence could have hit any American community, "This is an especially heartbreaking day for our friends who are lesbian, gay, bisexual or transgender," he said.

Omar Mir Seddique Mateen was born in 1986 in New York. Most recently he lived in Fort Pierce, about 120 miles southeast of Orlando. Fearing explosives, police evacuated about 200 people from the apartment complex where he lived while they looked through his residence for evidence.

Mateen's parents, who are from Afghanistan, said he'd expressed outrage after seeing two men kiss in Miami, but they didn't consider him particularly religious and didn't know of any connection he had to ISIS.

He was married in 2009 to a woman originally from Uzbekistan, according to the marriage license, but he filed documents to end the marriage in 2011.

Sitora Yusufiy, interviewed by CNN in Boulder, Colorado, said she and Mateen were together about four months, though it took a long time to complete the divorce because they lived in different parts of the country after separating.

Mateen was a normal husband at the beginning of their marriage but started abusing her after a few months, she said. She said Mateen was bipolar, although he was not formally diagnosed. She also said Mateen had a history with steroids. He was religious but she said she doesn't think his religion played in to the attack.

Mateen had worked since 2007 as a security officer at G4S Secure Solutions, one of the world's largest private security companies.

A message posted in Arabic on a dark web site associated with the ISIS news agency Amaq said "the armed attack that targeted a gay night club in the city of Orlando in the American state of Florida and that bore more than a 100 killed and wounded was carried out by an Islamic state fighter."

But CNN's Salma Abdelaziz, who translated the message and closely monitors ISIS messaging, cautioned about taking the message at face value.

She said the language is inconsistent with previous ISIS announcements and that the Arabic word for gay was used rather than an epithet normally used by ISIS. Also, there was no claim that the attack was directed, just an after-the-fact claim the gunman was an ISIS fighter, she said.

At a Sunday afternoon news briefing, FBI Assistant Special Agent Ronald Hopper said the agency was aware of Mateen. The FBI interviewed him in 2013 and 2014 after he expressed sympathy for a suicide bomber, Hopper said.

"Those interviews turned out to be inconclusive, so there was nothing to keep the investigation going," Hopper said.

It's not known if those weapons were used in the attack.

"He is not a prohibited person. They can legally walk into a gun dealership and acquire and purchase firearms. He did so. And he did so within the last week or so," Velinor said.

Scene inside the club

Pulse describes itself as "the hottest gay bar" in the heart of Orlando. Hours before the shooting, the club urged partygoers to attend its "Latin flavor" event Saturday night. The club is a vast, open space that was hosting more than 300 patrons late Saturday and into Sunday morning.

People inside the cavernous nightclub described a scene of panic made more confusing by the loud music and darkness.

"At first it sounded like it was part of the show because there was an event going on and we were all having a good time," clubgoer Andy Moss said. "But once people started screaming and shots just keep ringing out, you know that it's not a show anymore."

Christopher Hansen said he was getting a drink at the bar about 2 a.m. when he "just saw bodies going down." He heard gunshots, "just one after another after another."

The gunshots went on for so long that the shooting "could have lasted a whole song," he said.

When the shots erupted, Hansen hit the ground, crawling on his elbows and knees, before he spotted a man who had been shot.

"I took my bandana off and shoved it in the hole in his back," Hansen said, adding that he saw another woman who appeared to be shot in the arm.

Survivors provided CNN with dramatic accounts of how they avoided death. One person hiding in the bathroom covered herself with bodies to protect herself. Some entertainers hid in a dressing room when the shooting started and escaped the building by crawling out when police removed the air conditioning unit.

One of the bartenders said she hid under the glass bar. Police came in and said, "If you are alive, raise your hand." Then police got her and others out.

After the initial shooting, police surrounded the club while Mateen was inside with clubgoers hiding in bathrooms and other parts of the building. People inside the club were communicating on their phones with law enforcement from that time until around 5 a.m., when authorities used an armored vehicle to break down the door of the building.

Thirty-nine people and Mateen were pronounced dead at the scene, with two bodies found in the parking lot, Mayor Buddy Dyer said. Eleven people were taken to hospitals and pronounced dead there, he said.

The City of Orlando is posting names of the deceased on a website after next of kin are notified. The youngest person among the first seven named, Luis Omar Ocasio-Capo, was 20 years old.

Forty-three of the wounded people were patients on Sunday afternoon at Orlando Regional Medical Center, a hospital spokesperson said, with 26 operations being performed.

Before Sunday, the deadliest shootings in U.S. history were at Virginia Tech in 2007 and Sandy Hook Elementary School in 2012, with 32 and 27 killed. Fourteen people were killed December 2 in an attack in San Berardino, California.

National media attention was already focused on Orlando over the weekend because of Friday night's fatal shooting of Christina Grimmie while she signed autographs after a show. She was an up-and-coming singer who had appeared on NBC's "The Voice." Her shooter then killed himself. The Pulse shooting happened only a few miles from the Plaza Live theater, where Grimmie was killed.

Dyer, the mayor, called for the city to come together. "We need to support each other. We need to love each other. And we will not be defined by a hateful shooter," he said.

President Obama called for flags to be lowered to half staff and Florida Gov. Rick Scott called for a moment of silence across the nation at 6 p.m. Sunday. States of emergency were declared for the city of Orlando and for Orange County.

Also on Sunday, authorities in West Hollywood, California, arrested 20-year-old James Wesley Howell. They said they found an arsenal in his car that included, three assault rifles, high-capacity magazines, ammunition and a five-gallon bucket with chemicals that could be used to create an explosive device, officials said. At 5 a.m. PT, police got a call about a prowler and found Howell, who told authorities he was looking for a friend to attend the LA Pride festival.

There was no indication the arrest was related to the Orlando attack. 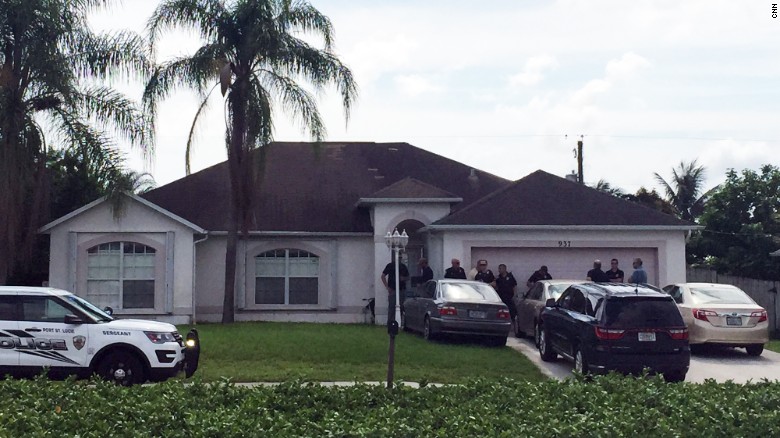 Eleven Orlando police officers and three sheriff's deputies who exchanged gunfire with the suspect will be temporarily relieved of duty pending an investigation.

'This is a hate crime'

The attacks were denounced on Sunday by numerous groups, including the Vatican, Afghan President Mohammad Ashraf Ghani and the Council on American-Islamic Relations.

"This is a hate crime, plain and simple," CAIR National Communications Director Ibrahim Hooper said. "We condemn it in the strongest possible terms."

Nadine Smith of Equality Florida said groups are planning vigils around the nation. "It has just been a devastating day but people are starting to rally," she said.

"Like everyone in the country, I am devastated about the horrific events that have taken place today. Pulse, and the men and women who work there, have been my family for nearly 15 years. From the beginning, Pulse has served as a place of love and acceptance for the LGBTQ community. I want to express my profound sadness and condolences to all who have lost loved ones. Please know that my grief and heart are with you."

Omar Mateen: Angry, Violent 'Bigot' Who Pledged Allegiance To ISIS
As the world mourns the 49 victims of the Orlando nightclub massacre, investigators are working to piece together a picture of the man responsible for the deadliest mass shooting in U.S. history.

US: Four Killed in Shooting at Fort Hood; Gunman Dead, Multiple Injuries
A shooting at the Fort Hood military installation in Texas left at least four people dead, including the gunman, and more than a dozen were injured, according to authorities.

U.S. Discloses Intelligence on Downing of Malaysian Jet
The Obama administration, detailing what it called evidence of Russian complicity in the downing of a Malaysian airliner, on Tuesday released satellite images and other sensitive intelligence that officials say show Moscow had trained and equipped rebels in Ukraine responsible for the attack.

US Senate Rejects Gun-Control Measures After Orlando Shooting
The U.S. Senate on Monday rejected four measures restricting gun sales after last week's massacre in an Orlando nightclub, dealing a bitter setback to advocates who have failed to get even modest gun curbs through Congress despite repeated mass shootings

US: Week of Severe Weather Leaves at Least 43 Dead Across Seven States
Blizzard conditions and flash flood warnings hit the already-ravaged residents of the heartland Monday after a string of severe storms left at least 43 people dead across seven states during the previous four days.
Tags:
accidentsorlando shootingterrorismUS