Franceterrorism
A priest has been killed in an attack by two armed men at his church near Rouen in northern France, police and French media have said.

French TV said shots had been heard after police arrived at the scene. Both hostage-takers are now dead.

The area has been cordoned off and police have told people to stay away.

At least one person is receiving medical treatment for injuries.

There was no immediate indication of the identity or motive of the hostage-takers, but France has been on high alert since the Bastille Day attack in Nice earlier this month, when an attacker ploughed a lorry into celebrating crowds, killing more than 80 people.

The BBC's Lucy Williamson in Paris says the French government has been under huge pressure to prevent further attacks.

President Francois Hollande and Interior Minister Bernard Cazeneuve are on their way to Saint-Etienne-du-Rouvray to be briefed by police. 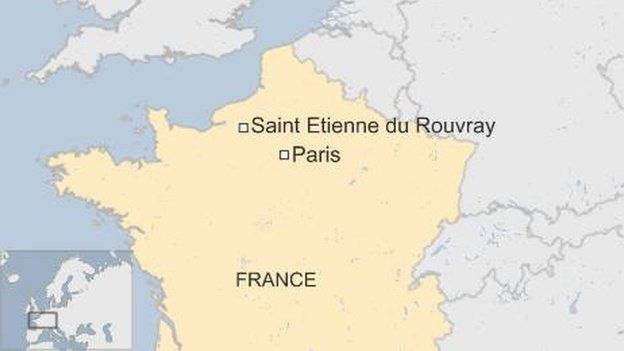 A "terrorist" gunman killed 80 people and wounded scores when he drove a heavy truck at high speed into a crowd that had watched Bastille Day fireworks in the French Riviera city of Nice late on Thursday, officials said.

Paris Attackers Were Versed in Atrocity, IS Video Shows

ISIS has released a gruesome new propaganda video that purports to show final messages from the Paris attackers.

The French authorities said on Wednesday that they had identified the third attacker at the Bataclan concert hall, where 90 people were killed during a coordinated series of assaults in and around Paris three weeks ago.

A hostage situation in the northern French town of Roubaix has ended, with the hostages now safe, local officials say.

Brussels remained under extremely heavy security Monday after police carried out raids around the Belgian capital amid warnings of possible terrorist attacks similar to those that killed 130 people in Paris 10 days ago.