accidentsNepal
Nepal – An overcrowded bus veered off a mountain highway in Nepal on Monday, killing at least 33 people and injuring 28 others, a government official said.

The injured people were brought by helicopter to Kathmandu and are being treated in two hospitals, Home Ministry official Chiranjivi Nepal said.

The bus veered off Arniko highway and rolled about 500 feet. Police were still trying to determine the cause. The highway is wide enough for two vehicles to pass but has sharp turns and no guard rails.

Parts of the bus, bodies and luggage were scattered on the forested slopes below the highway. Army and police rescuers were combing the slopes near Deurali village, 50 miles east of the capital.

Bus crashes are generally blamed on poorly maintained roads and vehicles in Nepal. Much of the crashes happen during the rainy monsoon season that begins in June and ends in September. 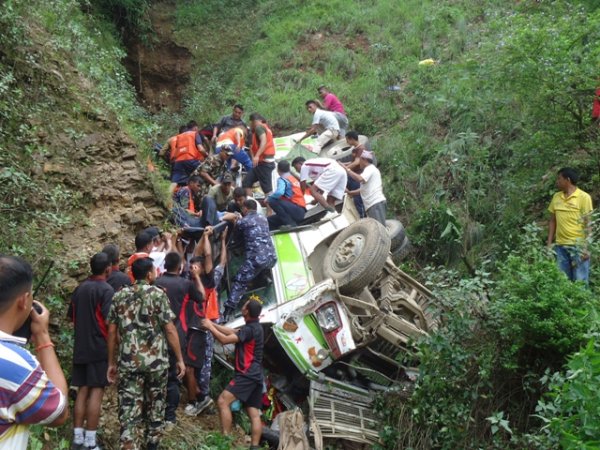 Pakistani hospitals on Monday struggled to treat scores of severely burned victims of a fuel tanker explosion that killed at least 146 people, as Prime Minister Nawaz Sharif flew back from an overseas trip to visit the injured.

Up to 20 students have been killed and several others injured after a huge tree fell on people near a popular waterfall in Kintampo, Ghana.

The death toll in the crash of a tour bus returning from a trip to cherry trees in Central Taiwan’s Wuling Farm rose to 33 Tuesday, while another accident involving a bus carrying visitors to/from the same scenic area did not cause any injuries.

Twelve school children and the driver of the bus they were travelling in were killed and about two dozen other children injured when their vehicle collided with a sand-laden truck amid dense fog in Etah district’s Aliganj on Thursday morning.

The scene unspooled as if in a horror film: As firefighters fought to control a blaze in one of Tehran’s most prominent high-rise buildings, the structure suddenly collapsed in a smoldering heap of wreckage reminiscent of the scene in New York on Sept. 11, 2001 — all while millions watched on Iranian state television.