The police and federal agents are searching for a 28-year-old man, described as a naturalized citizen of Afghan descent, Ahmad Khan Rahami, in connection with the bombing in Manhattan on Saturday night, sending an unprecedented cellphone alert to millions of residents.

“I want to be very clear that this individual could be armed and dangerous,” Mayor Bill de Blasio of New York said on Monday morning. “Anyone seeing him should call 911 immediately.”

Mr. de Blasio would not go into detail about why Mr. Rahami was wanted, but he said finding him was critical to the safety of the city.

“What we do know is we need to get this guy right away,” he said.

Gov. Andrew M. Cuomo, who said on Sunday that the attack did not appear to have a link to international terrorism, said new evidence might change that thinking.

“I would not be surprised if we did have a foreign connection to the act,” he said on CNN on Monday morning. 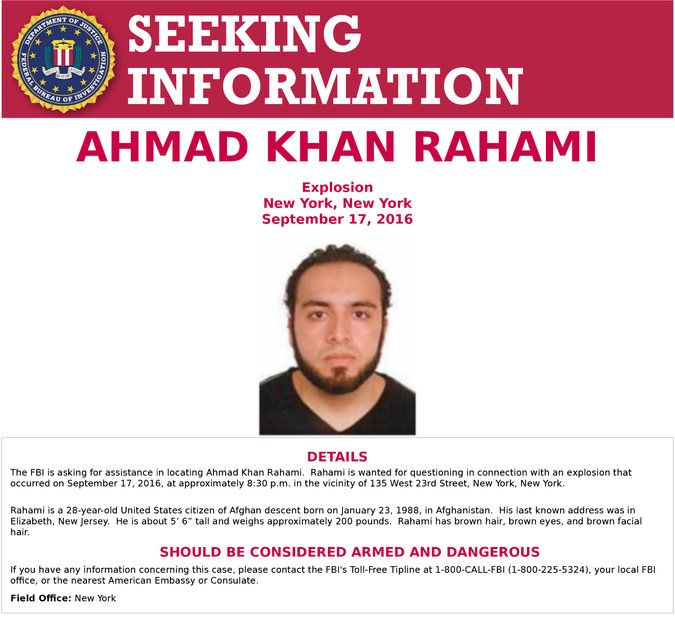 Mr. Rahami was born on Jan. 23, 1988, in Afghanistan. His last known address was in Elizabeth, N.J. He is described as about 5 feet 6 inches tall and about 200 pounds. Mr. Rahami has brown hair, brown eyes and brown facial hair.

A law enforcement official, who agreed to speak about the investigation only on the condition of anonymity, said they had evidence that Mr. Rahami was connected not just to the Manhattan explosion in the Chelsea neighborhood, but also to a bombing that took place earlier on Saturday on the Jersey Shore.

The city’s police commissioner, James O’Neill, directed the entire patrol force of the New York Police Department – 36,0000 officers – to step up their vigilance and be on the alert for Mr. Rahami.

Dozens of officers and federal agents were zeroing in on locations in New Jersey. At the same time, more than 1,000 officers from the city police force’s Critical Response Command and Emergency Service Unit were working to secure New York City landmarks, commuter hubs and other sensitive sites.

By midmorning on Monday, the police had handled dozens of calls for suspicious packages.

Hours before Mr. Rahami’s name was released, the police discovered five pipe bombs near a train station in Elizabeth, detonating one of them overnight as they sought to disarm them. Before dawn, agents conducted a series of raids in the New Jersey city.

Law enforcement officers closed and evacuated the La Bottega Dei Sapori Deli Grocery and Sonia’s Beauty, a salon to the left of the restaurant, as well as HR Computer and Communication Services Inc.

Mr. de Blasio said New Yorkers should be prepared to see a large increase in police presence across the city.

“In the coming hours we are going to be able to say a lot more about what happened here,” Mr. de Blasio said Monday during an interview on “Good Morning America.” “It is certainly leaning more in the direction that this was a specific act of terror.”

The law enforcement official said that while there was no direct evidence yet linking Mr. Rahami to the Islamic State or Al Qaeda, much about him remained unknown.

“We have a lot to connect him to the Seaside Heights device, to the 27th Street device, to the 23rd Street device,” the official added. “And in all likelihood the Elizabeth train station device — which is a half-mile from his residence. So, the ideology, the connection to international terrorism, we might flesh that out as we go through the results of search warrants, looking for computers, discs, things like this. Search warrants that we did Sunday night at the residence in Elizabeth.”

The main priority for the police at the moment is catching him.

“Here’s a guy who has been involved in what appears to be four bombings in rapid succession in recent days in crowded places,” the official said. “So we need to get him.”

The police were led to Mr. Rahami through surveillance videos from the Chelsea area.

Late on Sunday night, the police stopped a car on the Belt Parkway near the Verrazano-Narrows Bridge in Brooklyn and took in five people who were connected to Mr. Rahami for questioning.

There was increased police activity on both sides of the Hudson River overnight and throughout Monday morning, as the police responded to reports and chased down leads, including the tip that led to the discovery of the pipe bombs in Elizabeth.

After finding that the backpack contained “wires and a pipe,” the mayor said, the men dropped the item in the street and contacted the Elizabeth Police Department around 8:45 p.m. The police, in turn, called the Union County bomb squad, and the investigation was quickly turned over to the F.B.I. and the New Jersey State Police, Mr. Bollwage said.

The F.B.I. then sent in a pair of robots and determined that the backpack held five bombs, some of which were pipe bombs, the mayor said.

Around 12:30 a.m., the robots tried to clip a wire to disarm one bomb and accidentally detonated it, the mayor said. No injuries were reported.

Mr. Bollwage, speaking at a news conference on Monday morning, described how the Rahami family had issues with the city in the past, mainly surrounding the operation of their family restaurant, First American Fried Chicken.

Mr. Rahami’s father, Muhammad, opened the restaurant about a decade ago and employed his sons, the mayor said.

It was open 24 hours a day, but neighbors complained about rowdy crowds that would gather at the place, often after midnight.

Dean McDermott, who lives near the restaurant in Elizabeth, said he found patrons loitering in his yard and urinating in his driveway.

Responding to the complaints, the City Council passed an ordinance that would force the restaurant to close late at night, the mayor said.

“The City Council voted to shut it down at 10 p.m.,” he said. “They kept getting complaints from neighbors, it was a distress to people in the neighborhood.”

The Rahamis did not comply, according to neighbors.

On one occasion when the police came to force the restaurant to close, one of Mr. Rahami’s older brothers got in a fight with a police officer and was arrested. Before the case could be resolved, Mr. McDermott said, the son fled to his home country, Afghanistan.

The mayor confirmed that the Rahami family sued the mayor, the City Council, some 20 police officers, claiming that he had been discriminated against because of his race and ethnicity.

“It was neighbor complaints, it had nothing to do with his ethnicity or religion,” the mayor said. “It had to do with noise and people congregating on the streets.”

Islamic State Suspected After Suicide Bombers Kill 42 At Istanbul Airport
Turkey pointed the finger at Islamic State on Wednesday for a triple suicide bombing and gun attack that killed 42 people at Istanbul's main airport, and President Tayyip Erdogan called it a turning point in the global fight against terrorism.

Baghdad Bombing Kills At Least 200; ISIS Claims Responsibility
Nearly two days after a suicide truck bomb ripped through Baghdad, families are still hoping that rescuers searching through the rubble can locate the bodies of their loved ones.

Bomb Kills 71, Wounds 124 at Busy Nigeria Bus Station
At least 71 people were killed when a parked vehicle exploded at a bus station in the Nigerian capital, Abuja, on Monday morning, Nigerian officials said.

Suicide Bombings Hit 3 Cities in Saudi Arabia, One Near a Holy Site
Bombings rocked three cities across Saudi Arabia on Monday, including near the Prophet’s Mosque in the holy city of Medina, raising the specter of increasingly coordinated attacks by militants seeking to destabilize the monarchy.
Tags:
bombingterrorismUS