thailand
Thailand's King Bhumibol Adulyadej, the world's longest-reigning monarch, has died after 70 years as head of state, the palace says.

The 88-year-old king was widely revered but had been in poor health in recent years, making few public appearances.

He was seen as a stabilising figure in a country hit by cycles of political turmoil and multiple coups.

Crown Prince Maha Vajiralongkorn will be the new monarch, the prime minister has said.

In a televised address to the nation, Prayut Chan-ocha said Thailand would hold a one-year mourning period and that all entertainment functions must be "toned down" for a month.

Describing the king's death as "the most devastating moment for Thais", the prime minister said: "He is now in heaven and may be looking over Thai citizens from there."

In a later statement he urged vigilance, saying national security was a top priority.

"Everyone will need to be alert in every region and throughout the country to ensure safety", the Reuters agency reported him as saying.

The king's death comes as Thailand remains under military rule following a coup in 2014.

King Bhumibol was widely respected across Thailand, and thought of by many as semi-divine.

Hundreds of mourners have gathered outside the Bangkok hospital where he died, stricken with grief at the news.

Many held pictures of the king and wore yellow or pink clothing in his honour.

"How will Thailand live without you father?" cried one distressed man.

"I lost one of the most important people in my life. I feel like I haven't done enough for him," said another.

A palace official, speaking to crowds outside the hospital, said the body of the king would be moved to the Temple of the Emerald Buddha in Bangkok on Friday.

"His majesty has passed away at Siriraj Hospital peacefully," the palace statement said earlier, adding he had died at 15:52 (08:52 GMT).

Although the prime minister said Crown Prince Maha Vajiralongkorn would become the new monarch, he added that the official proclamation would be made at a later date.

He said the crown prince had confirmed that he would perform his duty as heir to the throne, but had asked for time to mourn his father's death.

The crown prince, who is 64, is much less well known to Thais and has not attained his father's widespread popularity. He spends much of his time overseas, especially in Germany.

Given the pivotal role the king has played in maintaining the balance of power in Thailand's volatile political environment, the succession will be a formidable challenge for the government, says the BBC's Jonathan Head in Bangkok. 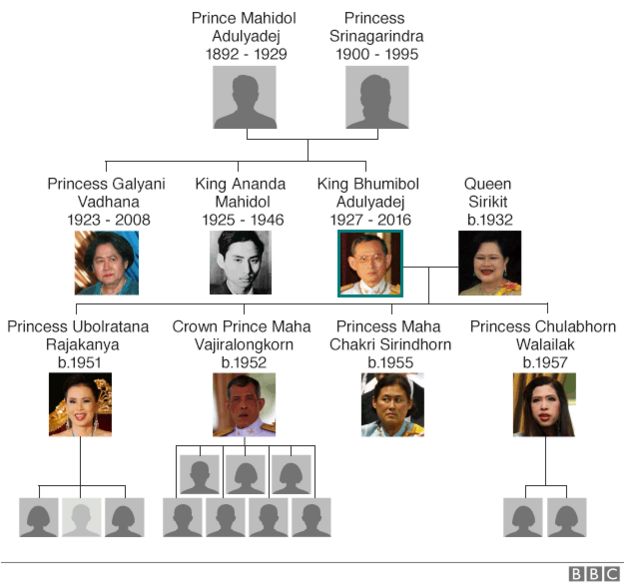 King Bhumibol, who was born in Cambridge in the US state of Massachusetts, acceded to the throne on 9 June 1946 after his brother, King Ananda Mahidol, died.

Though a constitutional monarch with limited powers, many Thais looked to King Bhumibol to him to intervene in times of high tension. He was seen as a unifying and calming influence through numerous coups and 20 constitutions.

However, his critics argued he had endorsed military takeovers and at times had failed to speak out against human rights abuses.

Following the death of King Bhumibol, Britain's Queen Elizabeth II has become the world longest-reigning monarch, having been on the throne for 64 years.

Tributes have been flowing in from across the world.

US President Barack Obama called the late king a "tireless champion of his country's development".

"I had the honour of calling on his majesty the king during my visit to Thailand in 2012, and recall his grace and warmth, as well as his deep affection and compassion for the Thai people," he said.

UN Secretary General Ban Ki-Moon said in a statement that he hoped Thailand would honour King Bhumibol's legacy of commitment to universal values and respect for human rights.

Thai economy emerges from recession as exports pick up

Gross domestic product grew at a quarterly rate of 1.2% in the last three months of 2010. Thailand's economy had contracted by 0.6% during the Q2 and by 0.3% in Q3, putting it into a technical recession.

Anyone can stick up a shack on the sand, stock it with beers and call it a beach bar. But what makes a great beach bar? It could be the sand-in-your-toes factor, or the washing and hissing of the waves nearby, or the sunsets or the people you meet.

Thailand's Bubble Economy Is Heading For A 1997-Style Crash

Thailand is part of the overall emerging markets bubble that I have been warning about in recent years, along with Indonesia, Malaysia and other Southeast Asian countries.

Thai Prime Minister Yingluck Shinawatra dissolved the nation's parliament Monday and called for new elections. But the move did little to appease anti-government protesters who remained on the streets by the thousands.

At least six people have been injured in gun battles in Bangkok between government opponents and supporters, a day before Thailand's general election.

Thai authorities signaled the possibility of holding elections under martial law imposed by the military yesterday as the army moved to clamp down on all forms of media.