7 of the Freakiest Places on the Planet

tourism
Scary sells. Whatever the nature of their flesh, the spirits of the dead rake in very real profits when it comes to sightseeing. The Haunted House Association in the United States claims profits of up to US$500 million from domestic haunted house ticket sales.

The tourists shelling out are doing so for a giddy but ultimately safe experience.

The places featured on our list below are less about the sort of commercial scare that you can buy at an amusement park.

This is the real deal.

These sites are authentically and unintentionally weird, macabre and mysterious. 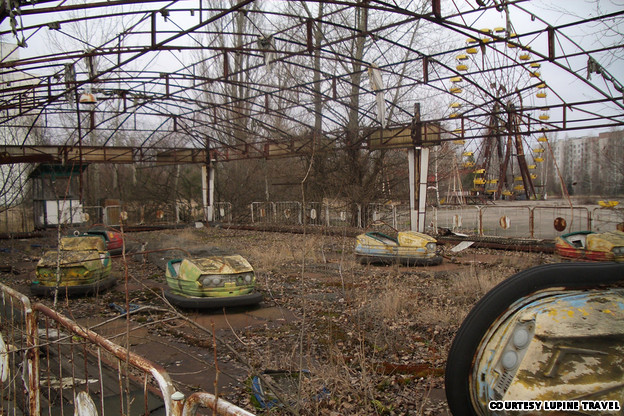 Deserted amusement parks can be creepy enough, but at Chernobyl Amusement Park, in the ghost town of Pripyat, Ukraine, the reason for abandonment makes the place not only creepy, but hazardous.

The 1986 nuclear disaster at the Chernobyl Nuclear Power Plant closed down the plant and caused the evacuation of the entire city, rendering this amusement park useless.

While the people have long since departed, the radiation remains.

Britain's Lupine Travel and Ukraine-based Solo East Travel both conduct tours to Chernobyl and its park. 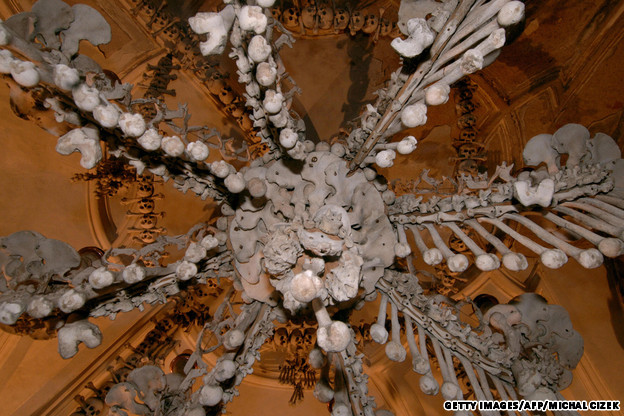 The Sedlec Ossuary is a small Roman Catholic chapel in Sedlec, Czech Republic. It also contains the skeletal remains of about 40,000 human beings dispersed throughout the interior in artistically arranged designs.

The most notable creations made of human bones are the chandelier in the center of the room and the coat of arms of the Schwarzenbergs -- the most blue-blooded of Bohemian aristocrats -- on the left.

It's difficult not to let your imagination run wild when pondering the sort of sick mind that conceived of things like a chandelier of human bones.

But the real motive behind it all is quite prosaic: it was simply a matter saving space.

These bones were freely given from the bodies of devout Roman Catholics all over Europe who clamored to be buried here after the Abbot of Sedlec went on a pilgrimage to Jerusalem in 1278 and brought back soil from Golgotha where Jesus had supposedly been crucified.

So many wanted to be buried in Golgotha's soil that the chapel was turned into an ossuary. The remains of the previously buried were dug up and rearranged in the 16th century: a practical if somewhat disquieting way to use limited burial space in a thrifty way.

Open daily (except December 24 and 25) 9 a.m.-4 p.m., give or take an hour, depending on the date. Check the website for the updated schedule. Admission is 60 koruna (about US$3) per person. It is worth noting that the council in charge of the ossuary's preservation considers it a sacred place. 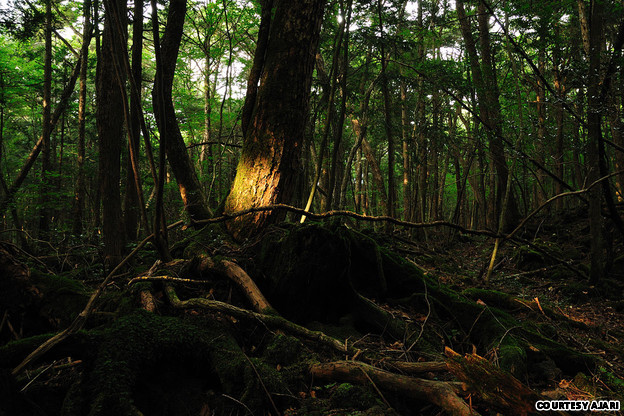 It's become something of a mecca for those who want to take their lives; 54 people committed suicide in Aokigahara Forest in 2010. The denseness of the woods means that it's likely that not all the bodies have been discovered.

The magnetic iron in the soil also renders compasses useless, and the forest itself is uncannily quiet and said to be haunted by angry Japanese spirits. As the largest fetish market in the world, Akodessewa Fetish Market in Lomé, Togo is a haven for voodoo practitioners.

By fetish, we're referring to talismans that are used in voodoo healing. Things like crocodile heads, chimpanzee hands, cobras and bones. Lots of bones.

These things (or parts of things) are sold as ingredients to be ground up, mixed with herbs and cooked over a fire. The resulting black powder is rubbed into a cut on the patient's chest, hopefully curing him of whatever brought him there in the first place.

This makes the market, in effect, one giant pharmacy, and while there's nothing bad about that, it may be difficult to keep your cool amidst tables piled with the desiccating, grinning heads of cheetahs and hyenas or unidentifiable, vaguely humanoid skulls laid out like melons at the local grocer's. 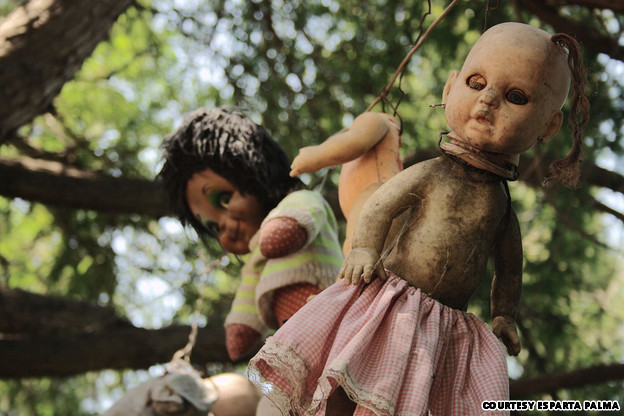 La Isla de las Muñecas, or the Island of the Dolls, is the stunningly morbid creation of a man named Don Julian Santana, who lived as a hermit on an island for some 50 odd years until his death in 2001.

During his time there he amassed an impressively ghastly collection of dismembered, broken dolls and hung them on tree branches around the island, where they hang to this day, like sacrifices.

It looks cruel and disturbing, but the backstory is surprisingly sweet.

Although there are several versions of the legend, they all converge upon the idea that Don Julian dedicated the dolls to the spirit of a little girl who had drowned in the canal.

Whether he communicated with the spirit, or whether the drowned girl had actually existed, are all points of contention.

But Don Julian just wanted to give his ghostly friend some toys to play with.

The otherwise uninhabited island is located 29 kilometers away from Mexico City, Mexico, on Teshuilo Lake, near the canals of Xochimilco. 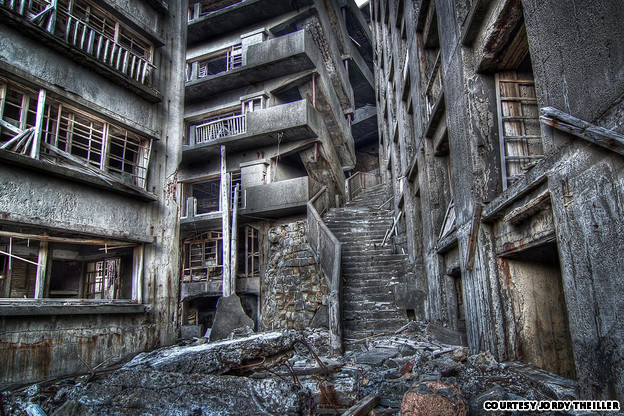 Hashima Island, also known as Gunkanjima (meaning "Battleship Island" as the island resembles a warship) is a 60,000-square-meter cluster of concrete ruins in the sea by Nagasaki, Japan.

In the 1950s it was the bustling home of thousands of coal mine workers. Hashima Island has been abandoned since 1974 when the coal mines shut down.

There's always something a bit sinister about deserted islands.

Isolation is a double-edged sword; being surrounded by sea might mean an excellent vacation getaway, or getting stranded with no place to run.

A visit to Hashima Island feels like the latter. The dilapidated buildings and abandoned belongings of the former coal miners make this place feel like the most desolate island on Earth.

Although Hashima was entirely closed off until 2009, travelers are now allowed to visit. 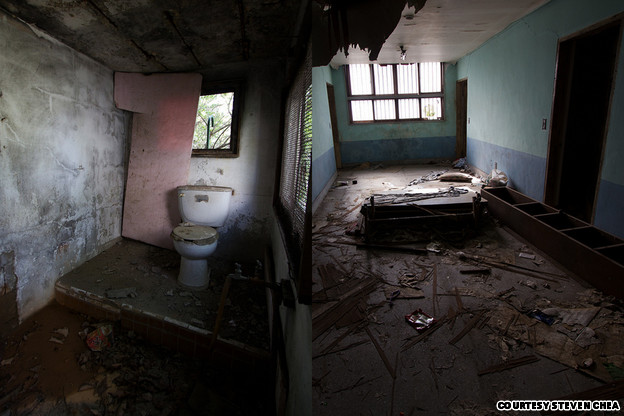 The story of this abandoned psychiatric hospital reads like a textbook plot of a horror film.

According to local legend, patients started dying mysteriously at the hospital 10 years ago, eventually forcing its closure.

It is now an abandoned, dirty building with only the most disturbing remnants of its former life, such as rusted wire fences and disintegrating examination chairs.

The hospital is famed as one of South Korea's three major haunted sites, the others being the Youngdeok haunted house, roamed by ghosts from the Korean War, and the Neulbom Garden, a former restaurant where it's said that you can still hear the sound of dishes being washed in the kitchen.

Before planning a trip at your go-to travel site, make sure you get the best deals with these expert tips.