crisisRussia
The ruble plunged more than 10 percent for the second day on Tuesday and recorded its worst fall since the Russian financial crisis in 1998 as confidence in the central bank evaporated after an ineffectual overnight rate hike.

At 0637 ET, the rouble was down over 11 percent against the dollar at 73.00 after dipping past 74 rubles per dollar for the first time. It was more than 15 percent weaker versus the euro at 92.99, dragged lower against both currencies by falling oil prices, increasing market panic and Western sanctions over Ukraine. 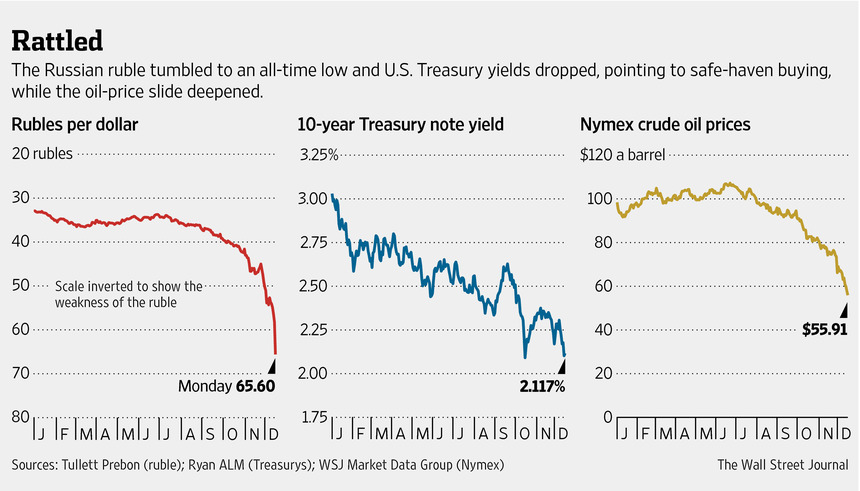 Russia's dollar-denominated RTS share index at one point was down as much as 15 percent, extending similar losses from Monday. Russian sovereign dollar bonds fell and money market rates jumped.

President Vladimir Putin has blamed both the slide in oil and the rouble on speculators and the West. A weak rouble poses a major test for Putin, since his popularity in part depends on his reputation for guaranteeing prosperity and stability, and it stokes inflation.

"The central bank will have a very hard time stabilizing the rouble as long as the sharp sell-off in oil prices continues," Vladimir Miklashevsky, an economist at Danske Bank, said in a note.

Brent crude prices fell over $1 per barrel on Tuesday to below $60 for the first time since July 2009. That hurts the outlook for Russia's oil-dependent economy, which the central bank says is likely to contract early next year.

The ruble's fall also reflects declining confidence in the central bank, whose Governor Elvira Nabiullina now appears powerless to stop the currency's slide. The market ignored televised Nabiullina comments that the rouble was undervalued on Tuesday.

"If such an interest rate rise didn't impress the market, then they (the central bank) have left the option of interventions of $10 billion a day. They are in (the market) every day," said Natalia Orlova, chief economist at Alfa Bank.

The central bank has spent over $80 billion defending the rouble so far this year, including more than $8 billion since it floated the rouble in November. The country still has reserves of around $416 billion.

Oil prices and the Western sanctions imposed on Russia for its role in the Ukraine crisis have been the main force behind the ruble's demise, but on Monday, analysts said, the currency was caught up in sheer panic.

"This was obvious proof that what now rules the Russian currency is not oil, or even waiting for it to move, but panic fueled by a large number of rumors about the return of our country to the "98-year" regime," said Alena Afanasyeva, a senior analyst at Forex Club in Moscow.

In 1998, the rouble collapsed within a matter of days, forcing Russia to default on its debt. Although Russia's public finances and reserves are much healthier than in 1998, analysts say the country is on the brink of a full-blown currency crisis.

A senior official in Kiev has accused Russia of invading Ukraine after Russian humanitarian aid lorries crossed the border without permission.

Authorities in the Russian capital reportedly detain four people after a Soviet star on one of the city’s Seven Sisters high-rises was painted blue and yellow.