A British Airways flight caught fire on the runway at the Las Vegas airport Tuesday, sending 13 people to local hospitals for treatment.

A majority of the injuries came as passengers slid down the inflatable chutes to evacuate the Boeing 777, Clark County Fire Department Deputy Chief Jon Klassen said.

The incident occurred shortly after 4 p.m. (7 p.m. ET) and involved British Airways Flight 2276, which was bound for London's Gatwick Airport, according to the McCarran International Airport's Twitter feed.

'Not safe, not safe'

Passenger Jay Jennings, who was one of the injured, said it was "pretty scary stuff."

The plane was getting ready to take off, he said, when he heard a big thud. He lifted the window shade and saw the trouble.

"Just saw flames on the engine," he said.

The plane stopped and sat for what felt like a minute, he said. Then the captain came on the intercom and told the passengers there was an emergency and they needed to evacuate.

When one of the emergency doors opened, smoke poured in. "Not safe, not safe," someone said, Jennings recalled.

Jacob Steinberg was also on board.

"A few have cuts and bruises from the slide down. They've been bandaged up," he said on Twitter. "One young woman was taken away by paramedics, but looked OK."

The flight had 159 passengers and 13 crew members aboard.

Photos at one point showed large plumes of black smoke engulfing the aircraft. That's what Bradley Hampton saw from the plane he was on, about 200 to 300 yards away.

Hampton told CNN that he didn't know whether any passengers were on the British Airways jet -- until "all of a sudden, we saw the doors fly open and the slides inflate."

"At that time, we saw droves of people jumping out of a slide and running across the runway away from the plane," he said.

One of the passengers evacuating was Jacob Steinberg, a sports writer with the Guardian newspaper in the United Kingdom. He tweeted that a few people had cuts or bruises from the emergency slide.

He also said people shouldn't criticize passengers who took their carry-on luggage with them during the evacuation.

Fire put out in minutes

Paul Berberian, who had just landed on a flight from Denver, expressed admiration at how quickly everyone moved.

"It was like seconds, it was incredibly efficient," Berberian told CNN's Anderson Cooper. "As soon as the slides popped, five seconds later people were just flying down ... and running away."

Berberian estimated that small vehicles were on site within about 90 seconds and larger fire trucks within two minutes. The airport tweeted that the fire was out and all passengers were off the plane by 4:18 p.m. -- just five minutes after the first call came in.

"Three large fire trucks, they were just dousing that side of the aircraft with water to put out the fire," Berberian said. "It was very quick."

Hampton said that his own plane, as well as others, "were completely at a standstill" for some time as the situation played out. The incident spurred McCarran to close one of its runways, the airport added.

Aerial video showed the aircraft on the tarmac, with firetrucks nearby and several slides coming out of the plane that passengers used to exit and board buses that took them to the terminal.

Authorities didn't immediately say what caused the 777's left engine to catch fire. Two FAA inspectors were on the scene within about an hour after the incident ended, agency spokesman Ian Gregor said.

"Safety is always our priority," British Airways spokeswoman Caroline Titmuss said. "We are looking after customers after an incident involving Flight BA2276."

CNN aviation analyst and 777 captain Les Abend said pilots pull a "fire handle" under such circumstances. It deploys fire retardant to the specified area, cuts the hydraulics and electrical systems to the engine and shuts off the air system in the cabin. That means it was unlikely smoke was getting in the cabin until the emergency doors were opened.

Abend said crews practice evacuating their airplanes frequently with the goal of having everyone out in 90 seconds. 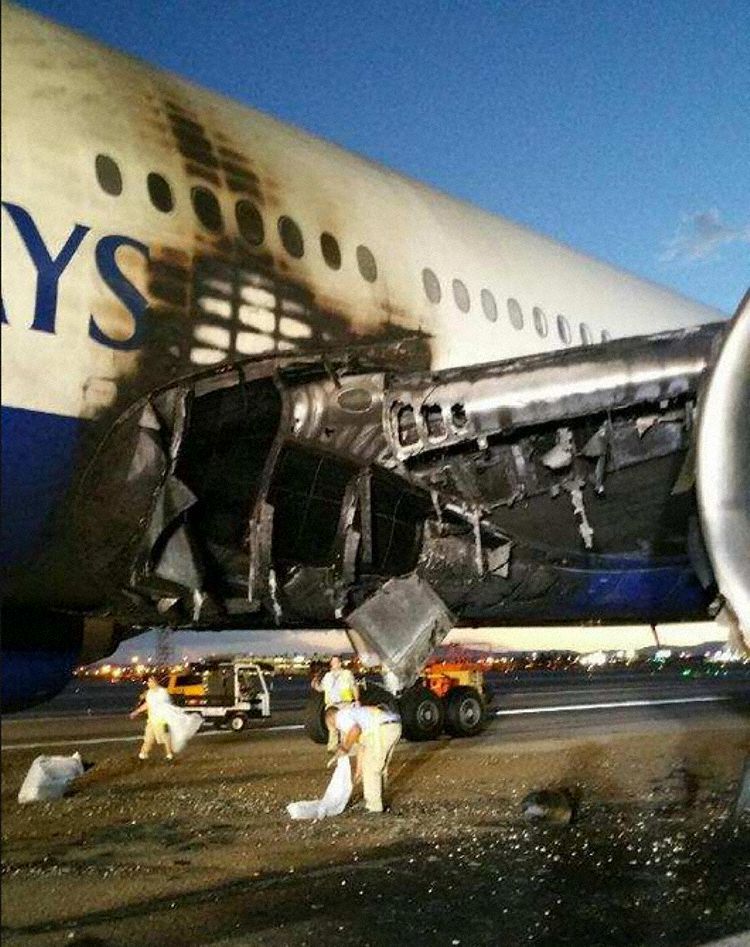 Video of a passenger on another flight (Video: Ravi S):

Video of a passenger in the terminal (Video: Balaji Rajgiri)

Flight 370 Search: 'It Could Take Months, It Could Take Years'
Many have pointed to lessons learned -- and heeded -- from the disappearance of Malaysia Airlines Flight 370.

Search Expands for AirAsia Flight QZ8501; Jet Likely at 'Bottom of the Sea'
The search for a missing airliner with 162 people aboard will expand Tuesday, the Indonesian government announced.
Tags:
accidentsAirlinesbritish airlinesUS