The gangly arms of four backhoes dug through a mound of sandy soil that had buried many of the residents of El Cambray alive in a landslide.

The scene of the mudslide in El Cambray, Guatemala on Friday, October 2.

Carefully, the diggers turned up sheet metal roofs, broken walls and the bodies of people trapped in the dirt bulging over much of the Guatemalan village.

By early Sunday, they had recovered nearly 90 bodies of people who died after the side of a towering hill broke loose suddenly and crashed down on the village in the darkness of Thursday night.

Since then, residents and rescuers have shoveled and even burrowed with their hands in search of the hundreds of victims the country's Public Ministry estimates were inside the dozens of homes that were instantly engulfed by the landslide.

By Sunday evening, the ministry was reporting 131 people were dead and more than 300 still missing.

Many people in El Cambray did not heed a warning to evacuate, said Alejandro Maldonado, the national coordinator for disaster reduction. El Cambray is about 10 miles (16 kilometers) east of Guatemala City.

Rain had soaked the village and the forested hills that rise steeply up around it. The town is nestled in a deep valley, leaving little space between the hillside and the homes below to buffer the force of the earth and trees that fell down on them.

The rescuers and villagers formed long bucket lines of up to 100 people to pass away dirt and debris. Some carried out the bodies of neighbors and loved ones, including children.

"We found the two month-old twins, and now we are looking for their mother and sister," a villager said.

"We only found one of my nieces, in a state that nobody would want to see a family member," said another.

Many were still waiting for the first body of their loved ones to turn up.

"I have 20 missing family members -- my seven brothers, my dad and my brother-in-law" among them, another villager said.

As they tried to salvage what they could from under the dirt to aid them in grieving, the pale gash in the hill left by the landslide gaped down at those digging.

On Saturday, the workers stopped what they were doing briefly and stood still for a moment of silence. 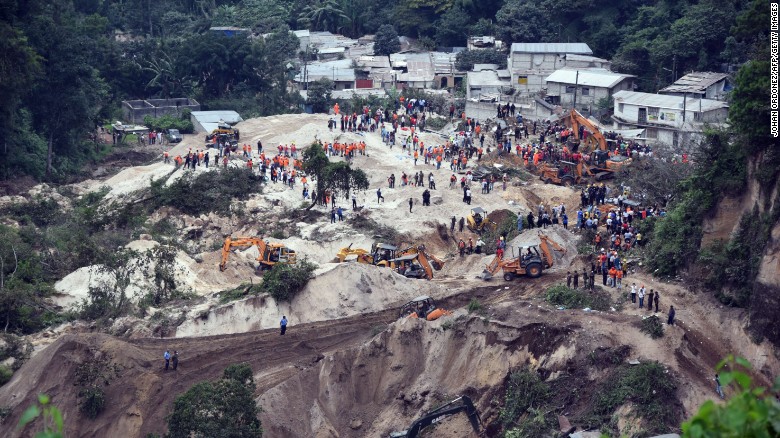 China Landslide: Rescuers Search for 91 People Still Missing
Hundreds of rescue workers are looking for survivors after a landslide hit 33 buildings in the southern Chinese city of Shenzhen.

More than 250 dead in Colombia mudslides
There are no more people officially missing after mudslides in Colombia killed at least 254, the country's president said Sunday.

Sierra Leone Braces for More Flooding as Mudslide Victims Buried
Sierra Leone is bracing for more floods as the country is burying the casualties of a mudslide that killed hundreds of people in the capital, Freetown.
Tags:
guatemalalandslide