Hundreds of rescue workers are looking for survivors after a landslide hit 33 buildings in the southern Chinese city of Shenzhen.

Seven people were pulled from the rubble with minor injuries but 91 are still missing. About 900 were evacuated as the landslide struck on Sunday.

The city is one of China's biggest and is a major industrial centre.

It is situated in the southern province of Guangdong, across the mainland border from Hong Kong.

The landslide has blanketed a vast area of 380,000 sq m (455,000 sq yards) covering it with up to 10m (32ft) of mud at an industrial park, Shenzhen's emergency management office said on its official microblog.

State news agency Xinhua said that the landslide caused an explosion at a natural gas pipeline. Workers have cleaned up about 400m of damaged pipeline and are now repairing it. 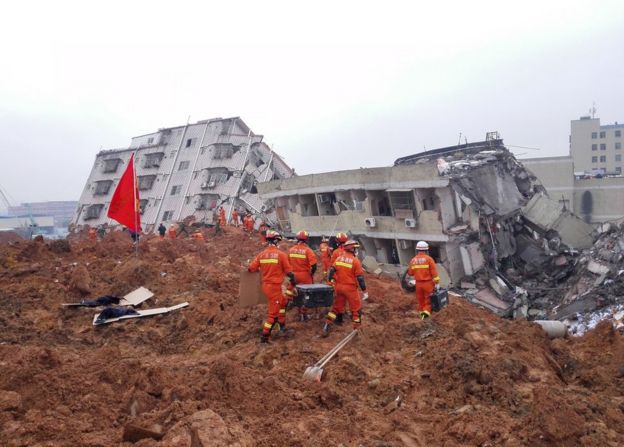 China's land and resources ministry said in a statement on its website that initial investigations showed the landslide happened when a huge mound of soil, cement chunks and other construction waste became unstable.

"Because the mound was very large, and the angle of its slope was overly steep, this led to it losing stability and collapsing," it said.

People's Daily said the mound had accumulated at a stone quarry that had been converted into a dumping area with its entrance and exit facing an industrial district.

A video taken by an eyewitness and posted online by Beijing Daily newspaper shows plumes of soil shooting up in the air as the mound of earth collapses.

The incident took place around 11:40 (03:40 GMT) on Sunday morning in Guangming New District on the outskirts of Shenzhen city. 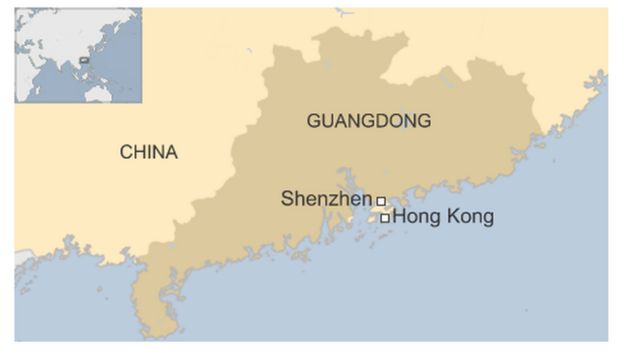 Emergency officials said 33 buildings have either been buried or damaged to varying degrees.

They include three workers' dormitories, several factories and offices, a canteen, and other buildings.

State media quoted officials as saying 59 men and 32 women were missing and that "signs of life" had been detected at three separate locations. Hundreds of rescue workers, police and special forces are at the scene helping with the operation.

President Xi Jinping has ordered local authorities to put all efforts into the rescue.

The incident comes after huge explosions at a chemical warehouse in the port city of Tianjin in August which killed nearly 200 people living in nearby residential complexes.

That high-profile tragedy raised questions on industrial safety and city zoning laws, and Chinese authorities had vowed to improve standards.

Blasts Kill Dozens at Market in China's Restive Xinjiang Region
A series of explosions struck a market Thursday in the capital of the volatile western Chinese region of Xinjiang, killing 31 people and wounding more than 90 others, state media reported.

14 Dead, 176 Missing in Washington State Landslide
The number of dead and missing after a deadly weekend landslide in rural Washington grew Monday as hope of finding any more survivors dwindled.