earthquakenew zealand
Australian, Canadian and US warships are helping with evacuations and supplying aid to the New Zealand town of Kaikoura after a series of tremors.

About 600 people were evacuated on Wednesday by air and sea.

Workers also established emergency road access to the town, which has been cut off by landslides.

Two people were killed when a severe earthquake hit the area shortly after midnight on Monday, followed by thousands of aftershocks.

An estimated 1,200 tourists were staying in Kaikoura, a popular whale-watching destination, at the time. About 3,500 people live in the town and surrounding area.

The country has been hit by at least 1,823 earthquakes since the magnitude 7.8 earthquake on Monday, according to GeoNet, New Zealand's government-funded earthquake monitoring service.

Engineering consulting firm Tonkin and Taylor, which has been employed by the New Zealand government to assess damage to Kaikoura, told the BBC that the damage in the area was "catastrophic".

"There have been 100,000 landslides, over 50 covering State Highway 1," the main road which runs the length of the country, it said.

But the company said damage to residential housing was "not too bad".

Helicopters began airlifting people from Kaikoura on Tuesday after road and rail links to the town were severed. Power and water supplies have also been disrupted.

An inland road open only to military vehicles transporting aid was established on Wednesday.

New Zealand's warship HMNZS Canterbury helped to transport the majority of Wednesday's evacuees. Another ship, HMNZS Wellington, has been surveying the seabed.

Canada's HMC Vancouver, Australia's HMAS Darwin and the US destroyer USS Sampson are bringing aid supplies and equipment to the town and are due to arrive on Thursday.

The USS Sampson is the first US warship to visit New Zealand in 30 years.

The foreign warships had been destined for Auckland to take part in 75th anniversary celebrations for the New Zealand navy but diverted to help with the recovery effort.

New Zealand Defence Minister Gerry Brownlee said the offer of assistance was "heartening", and that Japan and Singapore had also offered help.

Meanwhile, the cleanup is continuing in Christchurch and the capital, Wellington. Some streets remain cordoned off while safety checks are carried out.

Some buildings have been evacuated because of "structural concerns", TVNZ reported.

One eight-storey office building in central Wellington is expected to be demolished.

"The building is at significant risk of collapse so currently police and fire are conducting operation to seal off the area," Fire Service regional commander Brendan Nally told commercial radio.

Wellington Mayor Justin Lester said the full extent of damage would become clear later, but that the city had "resilience to cope" and the focus should be on "the worst affected areas".

Geonet initially gave Monday's quake - actually two at the same time - a magnitude of 7.5, but has now raised it to 7.8.

It was the largest tremor in the quake-prone country since 2009, it said, while early assessments of the geological changes indicate it was one of the "most complex earthquakes ever recorded on land". 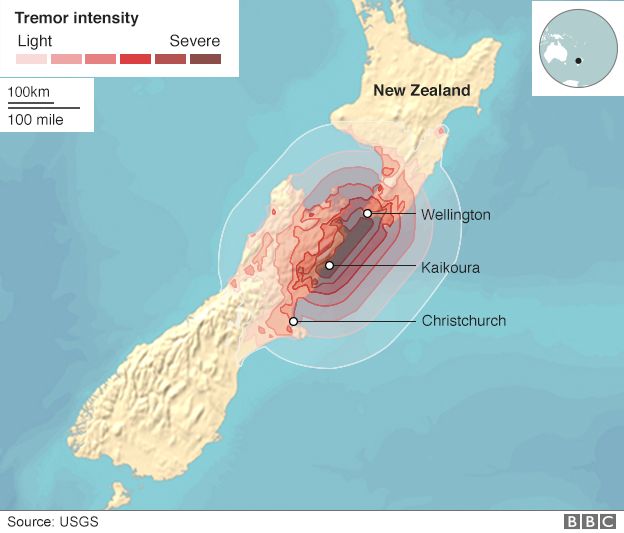 A powerful 7.8-magnitude earthquake has jolted New Zealand's South Island and triggered a tsunami, sending people running into the streets in a panic.