earthquakenew zealand
A powerful 7.8-magnitude earthquake has jolted New Zealand's South Island and triggered a tsunami, sending people running into the streets in a panic.

The quake struck around 50 kilometers (around 30 miles) northeast of the city of Christchurch just after midnight local time on Monday, the US Geological Survey reported, and triggered waves of 2.49 meters above usual tide levels, the Pacific Tsunami Warning Center (PTWC) said.

There were no immediate reports of casualties.

But New Zealand's Ministry of Civil Defense warned that the worst may be yet to come. The agency said on Twitter that the country's entire east coast was at threat and could expect waves of between three and five meters.

"Move inland or to higher ground immediately," the warning said.

Initial waves may not be the largest and they could continue for several hours, the Civil Defense posted, as tsunami-warning sirens wailed across the island.

"The first tsunami waves have arrived but it is too early to know what damage or casualties there may have been. Further waves should be expected and may be larger or more dangerous," the Civil Defense Ministry said in a statement.

"New Zealanders should stay off the beaches, stay out of the water, and not go sightseeing."

New Zealand is a South Pacific nation of islands, the two largest being the North and South islands, which are home to most of the population. Slightly more than 1 million people live in the South, while the North has more than 3 million.

'It's going to be a long night'

In Christchurch, memories of a devastating 6.3-magnitude earthquake in 2011 are still fresh for many. That quake killed 185 people and injured thousands, and reduced swathes of the city's historic area to rubble.

"The land has been very peaceful for many, many months. So this is bringing back all the rare memories," Chet Wah, owner of Designer Cottage B&B in Christchurch, told CNN.

"I just checked with all the guests. They are alright. It is scary. It's going to be a long night."

Christchurch, on the South Island's eastern coast, has a population of over 340,000 people, the most recent census shows.

Images on social media showed shattered windows, toppled grocery items on the floor of a supermarket and water sloshing back and forth in swimming pools from different parts of the country.

A photo of a road with a deep, wide crack down its middle served as sobering evidence of the temblor's force. 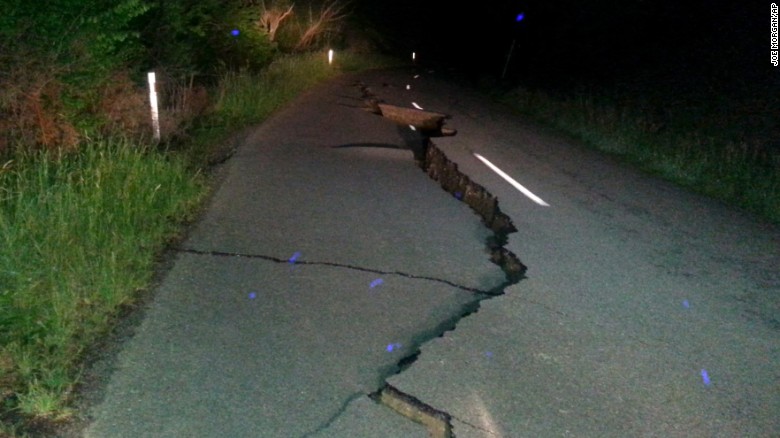 "This is the strongest [earthquake] I've ever felt," Tamara Hunt told CNN. She was with her husband at their home in Whanganui when the earthquake struck.

"It started off so small, like the cat moving in the bed, but then it started building and I had to run to the door. Stuff in the house was falling over and the doors were swaying really bad," she said. "Then we decided to get out, and that's when we saw our pool had lost a lot of water. The earthquake went on for two minutes."

The South Island has been hit by a flurry of aftershocks, according to the USGS and New Zealand's Geonet service, some with a magnitude above 6.0. Officials from the island's second-largest town, Dunedin, called a state of emergency there.

Life in a 'collision zone'

The USGS initially reported the quake's magnitude at 7.4 at a depth of just 10 kilometers -- shallow enough to cause serious destruction to the immediate surrounding area. It later revised the quake strength to 7.8, but changed its depth to 23 (14.2 miles) kilometers, giving more of a buffer between the epicenter and the Earth's surface.

The first wave may not be the largest. Tsunami activity will continue for several hours. #eqnz

New Zealand is regularly hit by earthquakes as it sits in a "collision zone" between the Indo-Australian and Pacific tectonic plates. It is part of the Pacific's "Ring of Fire," a horseshoe-shaped belt around the ocean's edges where many earthquakes and volcano eruptions occur.